To mark the weekend of May Day, Ninth Art dips a toe in the waters of folklore and myth in the good company of former SANDMAN artist Charles Vess, as he brings a host of classic tales and ballads to life.
02 May 2005 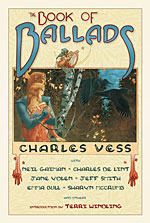 In UNDERSTANDING COMICS, Scott McCloud makes a convincing argument that the roots of sequential art go back to such early forms of art as hieroglyphics and cave paintings. Comics, therefore, are a natural evolution of some of the oldest forms of storytelling.

It's only natural that if comics evolved from an ancient form of telling stories, they can then also function as a new way to tell stories that have been around for hundreds of years.

In THE BOOK OF BALLADS, Charles Vess and a host of writers use the medium of comics to adapt several of the oldest kinds of stories, the myths, ballads and folktales that have been passed down through the centuries. In the process, they show how a teller can influence a tale, illustrate the universal themes and ideas in these stories, and provide a showcase for Vess's incredible art.

Many of the stories in THE BOOK OF BALLADS have been told many times over, as explained by Terri Windling in her fascinating introduction. They've been the inspiration for everything from folk music to fantasy novels (several of which have been written by contributors to this volume). The tales selected for adaptation here help illustrate why: Though several centuries old, they deal with such universal themes as sex, violence, longing, betrayal, and being forced to have sex with a really, really ugly witch who just ate your knights... well, OK, some stories may be more universal than others. But they're all damn effectively told, not to mention pretty to look at. 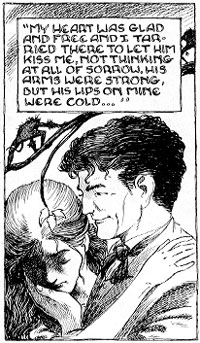 The best stories in the book are the ones where the telling brings a unique perspective to the story. 'The Daemon Lover' and 'The False Knight on the Road' are relatively straightforward versions of those stories, but the art vividly evokes the sense of cold and poverty from the time these stories were originally told. The realistic aspects of the story contrast sharply with the fantastic aspects; the False Knight is suitably inhuman and menacing, while the final page of 'The Daemon Lover' hauntingly drives the final twist home.

Other stories in the volume add a twist to the original story though the use of new framing sequences. 'King Henry' asks what happens after the fairy tale ending, while 'Sovay', a tale of a woman testing her lover's loyalty, speculates as to what other actions a woman prone to such extremes might take.

Some of the stories present the original material in a style that comments on it from a distance. 'The Three Lovers' takes the form of a stage play, with each page consisting of three vertically stacked panels representing the stage. The format calls attention to the theatrical nature of the story, adding a comic edge to what turns out to be an extremely dark story.

Vess's artistic experiments are the best part of THE BOOK OF BALLADS. Even when there's a story that doesn't quite work, his art more than holds the material together. 'The False Knight' uses a realistic style and a static four-panel gird to generate tension, while 'The Galtee Farmer' employs a looser, cartoonier style for its light-hearted tale. 'Thomas the Rhymer', which features some of the best art in the volume, combines a detailed crosshatch style for the real world with an evocative, unlinked style for the sequences set in Elfland.

In 'Tam-Lin' and 'Alison Gross', Vess's art is presented separately as illustrations to the text, resulting in some of his best and most detailed material. 'Gross' in particular is a standout, with the illustrations perfectly complimenting the more horrific aspects of the gruesome tale. 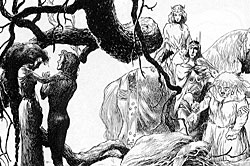 Charles Vess has been an unusual figure in the comic industry. He's contributed to several unique, well-known projects: THE BOOKS OF MAGIC with Neil Gaiman, which launched the popular Timothy Hunter character; ROSE with Jeff Smith, a fantasy-oriented prequel to Smith's BONE series; the illustrated novel STARDUST, again with Gaiman; and of course, 'A Midsummer Night's Dream' in SANDMAN, the only comic to win the World Fantasy Award for Best Short Story.

Vess's style is hard to define; it's both detailed and simple, cleverly combining elements of the unreal with an eye for realistic detail. This is best illustrated in this volume with 'The Black Fox', which details a most unusual encounter during a hunt. The foxhunt takes place across a realistically rendered countryside, a place so ordinary that it almost feels as though you were there. The being encountered in the story, however, is a massive, decidedly non-ordinary thing, something that towers over the human characters.

The effectiveness of the story isn't just in the realism of the setting or the amazing design of the being - it's in how these two-elements co-exist, and each one is just as convincing at the other. Reading these stories is like being able to look through a window into another time and place...only to see something from another world entirely scamper by.

THE BOOK OF BALLADS is reprinted from a self-published series Vess authored in the 1990s, with several new stories added for this volume. Like the original series, it includes the text of the ballads to provide the reader with an idea of how these stories existed in their original form - and, perhaps, to inspire the reader to create an interpretation of their own.

THE BOOK OF BALLADS crackles with a genuine and pure love of stories and storytelling, reminding us of the endless possibilities of even the oldest stories. It's all in how you tell them.