The murder of a Kansas family lies at the heart of IN COLD BLOOD, but what was in Truman Capote's heart that made him want to tell their story? Ninth Art follows Ande Parks and Chris Samnee, as they follow Capote to Kansas.
12 September 2005 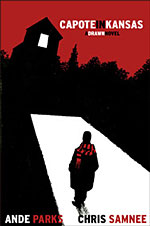 "I thought Mr Clutter was a very nice gentleman. I thought so right up to the time I cut his throat." - Perry Smith, from IN COLD BLOOD by Truman Capote.

I'll be honest. I thought this was a terrible idea.

The story of Truman Capote researching and writing his novel IN COLD BLOOD has been told many times before. There have been biographies and documentaries on Capote, a film and a TV miniseries of the book - hell, there's not one, but two films about Capote coming out in the next few months, both using IN COLD BLOOD as a framework. How in God's name was a graphic novel supposed to bring anything new to this story?

And yet, Ande Parks and Chris Samnee have pulled it off.

For those not familiar with IN COLD BLOOD, here's a little back-story. In 1959, Truman Capote travelled to Kansas to investigate the brutal murder of a family named Clutter by two men, Dick Hickock and Perry Smith. Armed with his literary talents and an uncanny ability to recall whole conversations without the aid of notes or recorder, Capote created a narrative that weaved together the stories of the killers, their victims and the community, a book he called a "non-fiction novel".

The result was a critical and popular success and helped create the genre of 'literary journalism'. However, its creation took a major toll on Capote, who never produced another work on its level. It's a great story, but it's not terribly visual, and as I've said, its now been recreated many times over.

What makes CAPOTE IN KANSAS work is that it focuses on one particular aspect of the tale - how Capote was able to construct the narrative of IN COLD BLOOD. The question posed by the graphic novel is doubtlessly one that the creators had to ask themselves: How do you do justice to a story? What sacrifices do you have to make to find a story in the complexities of everyday life? And, in the end, what price do you pay for telling the tale? 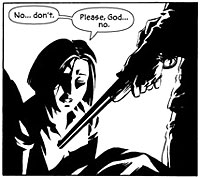 CAPOTE IN KANSAS opens in 1959, with Capote already at the centre of the New York literary scene. Intrigued by the Clutter killings, he sees a story around which to frame his "non-fiction novel". Leaving his lover Jack behind, he sets out for Kansas with his childhood friend Nelle, who's about to publish a high profile book of her own.

Capote's flamboyant, often insensitive ways play poorly with the citizens of the community, already galvanised by their loss. Soon, he's questioning whether he even has the right to tell this story. But a ghostly muse helps him connect to these people, even as he comes to befriend one of the killers, imprisoned Perry Smith.

As Capote comes closer to completing his book, he also becomes painfully aware of the psychological toll it's taking on him. Kansas reminds him of his own lonely childhood, and Capote comes to understand that in trying to tell this story, he has become part of it.

CAPOTE IN KANSAS works in part because the focus stays on Capote and his efforts to understand this community and the horrible events that affected it. Because the reader is experiencing these things as Capote experiences them himself, it creates a point of identification for a character that it's not always easy to like.

Capote is a fascinating figure, full of contradictions. There's a particularly powerful sequence where he writes a loving letter to Jack, then immediately tries to seduce a local man. For all his infidelities and insensitivities, Capote remains likeable because Parks makes it clear that it's his powerful need to connect that drives him, both in chasing this story and in his own life. This is especially well illustrated in a flashback to Capote and Nelle as children, where a letter from Capote's father is show over silent images of Capote finding himself alone. He's a tragic figure much like the Cutters - or even, for that matter, their killers. 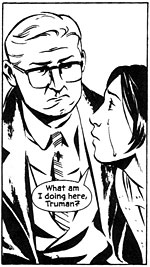 The use of historical figures in the book is well handled. An opening sequence with Capote at dinner with some fellow literati could easily have turned into an awkward piece of exposition and name-dropping, but it works because the focus of the scene is on establishing Capote's character. Nelle's identity snuck up on me because Parks didn't try to hit the reader over the head with it from the beginning. Her importance to the story is as Capote's friend and confidante, and knowing about her own book (and Capote's role in it), adds to the story, but isn't an essential part.

A major factor in CAPOTE IN KANSAS' success is Chris Samnee's art. Samnee is a name previously unknown to me, but this book signals his arrival as a major talent. This is an incredibly difficult story to illustrate, not just because of the use of real figures and historical details. A great deal of the book involves 'acting', in that the effect of a scene relies upon the reader being able to read into the characters' subtler emotions. One wrong move and you have a mass of talking heads expounding on murder and lousy childhoods.

Samnee's 'directing' of Parks' tight script is a great example of how well the visual and verbal elements of comics can work together. A four-page sequence between Capote and Nelle where Capote expresses his misgivings about the project is a great example of mood and pacing. Samnee's use of shadows and light is also highly notable, and works especially well during the several silent sequences, such as the funeral for the Clutter family, and Capote's nighttime journey to the Clutter home.

Though CAPOTE IN KANSAS explores an area that has been picked over several times before, Parks and Samnee use the strengths of the graphic novel form to make it worth retelling. This is easily one of the best graphic novels of 2005, and it accomplishes something similar to what Capote himself achieved with IN COLD BLOOD - it takes the facts as they already existed, and shapes them into a unique narrative.