With Nick Brownlow and Chris Allen. From the Wachowski's MATRIX revolution to Tarantino's ultra-violent KILL BILL, action movies have left action comics in the dust - but there's still a few good fights out there, if you know where to look.
20 October 2003

Most stories are built on conflict, but in comics, the most visual and visceral conflicts are rarely as well presented as the medium allows. Too many fight scenes are over in a single panel; two crudely drawn opponents poised mid-flow, fists extended. While the Western comics industry has grown and matured in every other area of story telling, in respect to its demonstrations of action, the Japanese industry has left it trailing a long way behind.

One reason for this would undoubtedly be that 'action' as a genre has never merited a great deal of serious respect. You'll never see an action movie get nominated for an Oscar. Likewise, action comics aren't at the forefront of most Eisner judge's minds come nomination time. Yet the ability to portray action sequences fluidly and dynamically is just as valuable as strong plotting or characterisation, and can prove just as problematic.

It's disappointing that comics have fallen so far behind movies when it comes to action. While every year brings a new iteration of the action movie's evolution, comics are slow to accept change. Perhaps the industry is lacking its equivalents to THE MATRIX and DIE HARD - those significant works that make everybody sit up and take notice, and help inspire growth in a stagnant pool. Then again, there are some action comics that stand out. 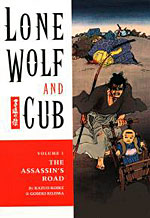 Over the course of twelve years and 9,000 odd-pages, authors Kazuo Koike and Goseki Kojima created one of the most memorable and influential action adventure epics produced in any medium; in comics circles however, LONE WOLF & CUB is a seminal, landmark work - literally inventing much of the visual vocabulary that later came to define the modern action comic. Following the murder of his wife and retainers, the disgraced samurai lord Itto Ogami takes to the road as a ronin; accompanied by three-year old Daigoro, he roams the countryside selling his services as an assassin to the highest bidder, honing and perfecting his skills for the day when he will return to the capital of Edo and avenge his wife's death and restore his family's honour.

A truly epic saga, with depth, pathos and loads of killings, the first few volumes are largely episodic - following Itto and his toddler son around as they butcher their way through a wonderfully evocative Edo-period Japan. Later on, the overarching plot takes centre stage, dealing with Itto's legacy as the Shogun's former high executioner and his bloody feud with the Yagyu clan. Currently published in the west by Dark Horse in twenty-eight, 300+ page volumes LONE WOLF & CUB is required reading for anyone who enjoys seeing people kill each other in really cool ways. [NB] 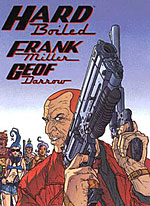 "Insane" is the word that springs immediately to mind when attempting to describe HARD BOILED. Set against the backdrop of a wonderfully crude and offensive cyberpunk-ish near-future, it's nothing but a fabulous orgy of brilliantly orchestrated hyper-violence from start to finish. Before you know it, you're halfway through the book and not even the barest semblance of a plot has begun to coalesce. Plenty of people have died though, and usually in a spectacularly cinematic fashion. When we first meet protagonist Nixon, he's being punched straight through a brick wall by an armoured car. After the car explodes in the middle of an arena-sized live sex show, Nixon emerges from the conflagration, covered in mangled sex workers and barbed wire, not a happy man.

"Could this really be just a load of violence and killing," you ask yourself excitedly, probably feeling rather dirty. Well, not quite. There is a plot - it's got something to do with robots and possibly even personal identity as well - but to be brutally honest, none of that's really all that important. HARD BOILED exists so that Geof Darrow can draw ever more intricate and horrific scenes of mindless slaughter at Frank Miller's behest. Darrow's maddeningly detailed art is a wonder to behold, and in tandem with Miller's script, it pioneers that decompressed storytelling style that's become so popular with the kids these days. Top marks all round just for the sheer, bloody audacity of it all. [NB]

Hiroaki Samura's samurai series differs from others in a few ways. For example, the lead character, Manji, is one of the most gleefully damned individuals one will find in fiction, an assassin who has vowed to kill 1,000 evil men to atone for past sins, but who has grown so debased and self-loathing that he derives pleasure chiefly from seeking that one opponent able to kill him. See, no matter what you do, he keeps coming back, his body reforming. Artistically, Samura follows a common manga practice, also seen in LONE WOLF & CUB, VAGABOND and others, of mixing dynamic inked action pages with delicate, shot-from-pencils artwork for emotional or establishing scenes, but he adds a bit of modern body language and hairstyle flair to the characters as well. Most significantly, the series sports an appealingly idiosyncratic approach to dialogue, mixing period speech with modern slang.

Samura's quirks are enjoyable, but the series succeeds in large part due to his mastery of action, usually in the form of extended fight scenes that could take an entire issue, or even several consecutive issues. FALL FROST is a bounty for fight fans, even those who have never read any of the previous eleven BLADE collections. Simply put, Manji and his headstrong sidekick Magatsu are travelling when they encounter several assassins, including an old enemy of Manji's, Shira, who has lost a hand. Now he uses the two exposed bones at the end of his arm as weapons, having sharpened them to points. It's unsettling, but when Manji himself is such a disturbing character, he needs foes even worse than him. The entire story, in videogame fashion, finds Manji and Magatsu tackling lesser enemies before Manji gets to fight Shira. It won't challenge your mind, but it's tremendously entertaining. [CA] 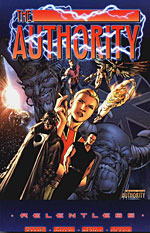 Just when we all thought superheroes were going to implode under their sheer weight of history, along came something to release the pressure in a glorious explosion of Technicolor futurity. Take one part Bruckheimer bravado, mix with an equal part of Emmerich's INDEPENDENCE DAY excess, and stir it all up with the deconstructed narrative stylings of manga, and you have THE AUTHORITY; quite possibly the most memorable and important superhero series of the last ten years.

Ellis' moment of genius was in opening up the issues to the artist rather than indulging himself. Hitch's sheer scale and awe-inspiring attention to detail, coupled with the cinematic colouring of Laura Depuy, cons you into believing you're watching a movie. But without the natural budgetary and physical constraints of a movie, the page can do anything they want it to do. Thousands of attack ships? The destruction of several major cities? Lead characters punching their fists through their opponents' heads? All possible on the page, and all achieved. If every superhero title had as brass a set of balls as the original AUTHORITY, we wouldn't need those big-budget cinematic adaptations. [JF]

Steve Skroce is a man who deserves more props. Though he's produced odd little pieces of work here and there - a short but beautiful fling with Alan Moore on YOUNGBLOOD, a slightly less impressive affair with Fabian Nicieza on GAMBIT - he's never really committed anything to page that's made his name. However, in common with the aforementioned Geof Darrow, he can claim partial responsibility for one of the greatest action movies of the last ten years, THE MATRIX. While Darrow was the film's conceptual designer, Skroce was the storyboard artist, and it's easy to see his hyper-detailed trademarks in the cascading bullet shells or exploding glass panels. When it was announced in the wake of THE MATRIX that Skroce would be writing and drawing an entire story for Marvel's WOLVERINE, expectations were high.

Whilst his shortcomings as a new writer are evident in the simplistic A-B-C plotting of BLOOD DEBT, it's all merely a hook to hang a series of ever more manic action sequences onto. BLOOD DEBT is simultaneously mired in old continuity, yet breaks free of clichÃ©d tradition. Wolverine visits an old flame in Japan, and the young girl he left her to look after. But no mere holiday for the old Canadian goes by uninterrupted, and he's soon dragged into a drag-down brawl between a Mongolian clan and the remnants of a Japanese gang.

Like Darrow, Skroce fills the page with overwhelming detail. Windows don't just break, they shatter into glittering shards. Bus shelters don't merely collapse, they explode. Arch-villains don't just send a couple of thugs, they send an army. While his inexperience with plot structure may disappoint, his storytelling ability impresses from start to finish. Each action sequence, building on the last, is a glory to read; an unholy union of manga vitality and European detail. With the small matter of the MATRIX trilogy now under his belt, here's hoping we'll soon see more work from Skroce soon. [JF]

Nick Brownlow is an IT professional and writer. Chris Allen is the writer of Breakdowns at Movie Poop Shoot.