With Kieron Gillen, Antony Johnston, Brent Keane and Alasdair Watson. There's more to Moore than WATCHMEN. Ninth Art presents a selection of Moore's other essential works, covering everything from the political to the personal, the magical to the mainstream.
17 November 2003

Bought your card yet? Because the comic industry's most renowned and arguably greatest creator is one year younger on the 18th of November, and he's celebrating in style - by retiring from comics. But why leave behind the industry you've called home for so many years? In Moore's case, it's perhaps because he's said more or less everything he wants to say in comics.

Ninth Art looks back over some of Moore's greatest works to date. We've decided to look beyond WATCHMEN, reviewed on Ninth Art this coming Friday, and turn our attentions to the other Alan Moore essentials, representing the full scope and breath of his career. While you're reading this list, remember that though he may be leaving the industry, he's also leaving an indelible mark that will never fade. 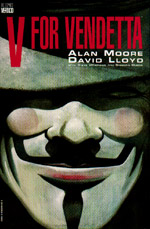 It's sometimes hard to convince people who didn't live through it, but during the early Thatcher-Reagan era, the possibility of a devastating nuclear war seemed very real. One of this fear's side effects is still very much with us today - the incessant erosion of personal liberty and privacy for the sake of "national security". V FOR VENDETTA, written in the early 1980s, presents the logical conclusion of its time - a society where there is no privacy, no liberty, no choice and no discernible future. Unless you're privileged enough to be the ones giving the orders, of course.

It suffers a little by conforming to certain conventions of its time - its protagonist is a violent anarchist rebelling against the oppressive draconian state, but he still wears a costume of sorts and displays extraordinary powers - and sometimes displays a political naivety that wouldn't wash today. But for all its rawness, V FOR VENDETTA remains a shrewd observation of its time and the environment in which it was written. Its sentiment and energy are never in doubt, and there are enough shining moments hinting at the craftsmanship Moore would later display - including a spiritual baptism centerpiece that remains one of the most emotional and poignant sequences he's written - to make it an essential read. [AJ]

And then Moore went to America, where industry powerhouse DC Comics talked him into taking on the little regarded title SWAMP THING - a rather dodgy 70s revival book on the brink of cancellation, about a bloke made out of weeds. Moore was given a second-rate, largely forgettable character that nobody really cared about, and the then hugely underrated art team of Steve Bissette and John Totleben, and to say he knocked the ball out of the park is an understatement.

From the now textbook re-imagining of the title character (now a weed that only thought it was a bloke) in 'the Anatomy Lesson', through the title's gradual evolution into a genuinely unsettling horror comic (culminating in the abandoning of the comics code over 'Love and Death') and the classic 'American Gothic' storyline (in which it could be argued Moore single-handedly created the Vertigo line), his four year run on the title was a hectic journey through daring experimentalism, madcap invention and top-notch storytelling - the influence of which is still being felt today. Now collected in its entirety by DC/Vertigo, Moore's SWAMP THING is a cornerstone of American comics history. [NB] 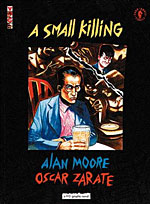 Moore at his most atypical, in both style and content, this collaboration with Oscar Zarate was the first in the ill-fated series of original graphic novels from book-publisher Victor Gollancz and often seems like an artefact from a different planet entirely. Set in the contemporary eighties world, this psychological ghost story follows Timothy Hole, an advertising executive, retracing the path of his life from New York to London to Sheffield to... Well, thereby hangs a tale. A SMALL KILLING is about success, the sacrifices you must made to get it, and how the screams of those you gutted on that altar chase after you. Except that it's hugely more restrained than that particularly overblown metaphor.

Stylistically, with Zarate's vivid impressionistic art, Moore's beloved nine-panel grid only appearing sporadically, and captions entrapping a convincing stream-of-consciousness, this manages the novel trick of capturing the paradoxical surrealism of naturalism alongside the protagonist's descent into delirium. Of all this list, it's what you'll turn to last, which says much. Arguably Moore's most personal work and - even more contentiously - perhaps his most mature. [KG]

As even Alan Moore admits in his voluminous footnotes to this intimidating volume, Jack The Ripper seems played out as a subject for serious work. Jack? Jack The Ripper? Oh, he's so passÃ©. Except. He lingers. Looked at from an alternate angle, Jack the Ripper is the only Serial Killer worth talking about. The Superman of Serial Killers, if you will.

Forgive that one. The looming, seamless black obsidian face of From Hell invites a little mocking graffiti like a city-centre statue. In fact, that comparison's apt. This stands alone like a Monolith in the landscape of comic's history, intimidating to the point of totalitarianism. Rather than taking it as Who Did It, it's a Why It Matters. It takes Jack The Ripper as not just a serial killer, but the serial killer, a whole new archetype for the modern age, and as characteristic of the period as cigarettes, rock and roll and out-of-control capitalism.

It's a fantasia of the oppression of the Feminine Principle through Dionysian means for the good of pure Apollonian reason at the birth of the twentieth century. It's also really very good. Between its masterful authorial voice, with Moore's technique never more him and never stronger, and Eddie Campell's morbidly beautiful black and white renditions of London Town, it has a strong claim to be not just the apex of Moore's achievement, but the pinnacle of comic's achievement. [KG] 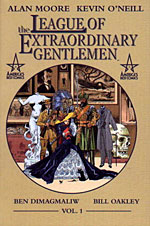 We've all done it. We've all seen something so wonderfully simple, yet ingeniously clever that we've uttered those immortal words, "I could've come up with that". The sheer and utter obviousness of it irritates us into believing that it was just waiting there for anybody to find. But it wasn't. It takes as keen and inventive a mind as Alan Moore's to come up with THE LEAGUE OF EXTRAORDINARY GENTLEMEN.

What if every character from Victorian pulp adventure fiction existed together in one universe? What if The Invisible Man could bump into Dr Jekyll on the way to meet Captain Nemo? And what if the brightest and the best of these characters were brought together by the British government to halt wrongdoing on a global scale? Why, you'd have one of the most witty, rollicking, adventure series of recent time.

Ably abetted by Kevin O'Neill, the man whose work was deemed so ugly by the Comics Code that he would never gain their acceptance, Moore produces one of his most outright joyful works to date. It may lack in intricate structuring (Two thirds of the book is given over to the "meet & greet") or clever narrative moments, but the one thing it leaves you with is a feeling that the creators are finally enjoying themselves. Forget the movie, seek out the original. [JF]

If there's a single comic that shows off Moore's journey through comics toward his retirement, it's PROMETHEA. The book reflects Moore's increasing interest in the occult, and it doesn't seem much of a stretch to suggest that a hefty chunk of his post-retirement work will continue to reflect that interest, so it doesn't seem likely that the importance of PROMETHEA as part of his body of work will diminish over time.

Beginning as a cross between Wonder Woman and Sandman, and rapidly shifting into a more esoteric mode, as a tour through, or basic primer on cabbalistic mysticism, this could easily be seen as a bridge between Moore's more mainstream superhero work and his less commercial works like SNAKE AND LADDERS. Beyond that, though Moore, in collaboration with Williams, Gray, letterer Todd Klein and others, has succeeded in producing one of the most visually striking comics out there - almost every issue has featured experimental layouts and spectacle on a scale uniquely suited to the medium. If this is the book Moore has chosen to bow out of commercial comics with, then he's leaving on a high note. [AW]