August is the perfect time to a trip to the seaside, but David Lapham's Seaside is like no holiday town you've ever seen. Ninth Art trades cotton candy for crime fiction as it heads SOMEWHERE OUT WEST.
09 August 2004 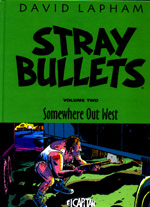 The town's name is Seaside, a name that's somewhat inappropriate given its location (hint: see the book's title). In fact, it's several hundred miles from the ocean, or most bodies of water for that matter, save a small lake where families have picnics and teenagers get drunk.

There's few residents, and many people passing through - truckers, travelers, tourists who want to see the town's claim to fame, the five-legged cow. It's a good town, a little dry, a little ignorant, but the kind of place where people mind their own business and don't ask questions. The kind of town you'd only visit if you wanted to drop off the face of the earth.

Outside of town, there's a trailer park called 'The Friendly Village of Woodlake'. In a trailer with holes starting to rot beneath the cheap carpeting are Orson, Beth and Nina, three people barely out of their teens and on the run. Exactly why isn't clear at first, but it probably has something to do with the two suitcases full of coke Nina's slowly sniffing her way through. They're waiting, waiting for a sign it's okay to leave or a sign that their pasts are about to catch up with them. In the meantime, it's just them, and like Sartre said, Hell is other people.

SOMEWHERE OUT WEST is the second hardcover collection of David Lapham's series STRAY BULLETS, but it can be easily understood without reading the first volume (there's a story relating how Orson met Beth that ties into the events at the end, and a story starring the fantastical Amy Racecar, but otherwise the issues stand on their own). Aside from the Amy Racecar digression (which ties into the series in the long run), the stories here form a novel of sorts, letting you get to know these characters as the suspense builds.

There's always the sense in SOMEWHERE OUT WEST that something bad could happen, but Lapham never takes the easy way out - it's more insidious to forgo a violent twist ending in favor of something more humorous or even upbeat.

The trick is, we know these characters are just dumb enough, just impulsive enough to fuck up their lives if given the chance, and we wait for that chance to come - and while we wait, we start to care about them, and wish the bad thing wouldn't happen. But we know it will. Orson's not strong enough to get away from Beth. Beth's too loyal to abandon Nina. And Nina was damned a long time ago, knows it, and can't forget it no matter how much blow goes up her nose.

But on they go - Beth trying to get Orson to take vengeance on a peeping Tom, Nina disappearing when Beth takes her out, dumb local boy Nick becoming a hero under unlikely circumstances, and a young girl who calls herself Amy watching all this chaos with an innocent smile on her face. We don't want anything truly bad to happen to these people, but we know it will. The only questions are how and when.

David Lapham is an independent comics success story; he created various superhero books with Jim Shooter for Valiant and Defiant, but he got sick of the business after working on the mucus-filled SF book WARRIORS OF PLASM, one of the goofiest comics ever created (and one of the few ever offered in trading card format). His superhero work was fairly subdued and realistic, but when he came back with STRAY BULLETS, his style had evolved significantly. He had created a universe full of shadows, cartoony characters and relentless pacing barely held in check by the eight-panel grids used on almost every page.

It's a universe that's at once campy, creepy and strangely realistic, a world where you can feel it when someone gets a sharp object through their hand and laugh it off when various characters say, "cool beans!" It's a universe where every story's ending feels like the beginning of another story, where things are always going to get worse, and where you never, ever want to meet the mysterious 'Harry' the criminals are always referring to. It's a world that seems too frighteningly real to ever let someone like Amy Racecar exist, but then again, maybe she could, because after all, anything can happen here.

While Lapham collects STRAY BULLETS in four-issue trade paperbacks format, the hardcovers are the best way to enjoy the series. The large format allows Lapham's art to shine in a way the single-issues and TPBs don't; here, it's easier to appreciate Lapham's careful sense of framing and pacing; each panel is like a shot from a movie, carefully using the relationship of the character or characters within the frame to establish a mood and psychological state.

It's done so subtly that when something violent or shocking happens, it has a real impact - Lapham is one of the few people who can present an extreme close up of a horrified face and make it burrow its way into your psyche and stay there. There's also a fascinating set of 'extras', showing character designs, 'behind the scenes' stories about the writing of the book, and excerpted script and storyboard samples from a film project also developed during this time.

SOMEWHERE OUT WEST is the second STRAY BULLETS volume, but it's just as accessible as the first, and it's one of the best pure crime comics ever - sneaky, violent, suspenseful and often hilarious. It's the kind of book where you can laugh at a character, feel sorry for him a few pages later, fear for his life a few pages after that, and laugh at him again by the end.

And when you're done, you'll feel like you know the town of Seaside and its people - dumb name, insane mayor, five-legged cow and all. You'll wish things had turned out better, too, and then wonder how they could have turned out any other way.