French cartoonist David B's acclaimed, frustrating and discomforting autobiographical comic deals with his brother's struggle with epilepsy - and his family's struggles with his brother. Ninth Art meets the family.
08 August 2005 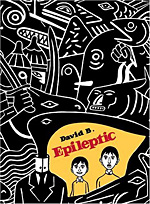 Since the underground comics of the late '60s, biographical strips have formed a large part of the independent comics scene in the United States. From Robert Crumb and Harvey Pekar to Jeffrey Brown and Craig Thompson, and embracing 1,001 small pressers in-between, autobiographical comics have a rich and varied history in the US.

But in the last few years it has been European comic creators that have been making the big waves internationally with their own take on autobiographical comics. In France, one of the most acclaimed masters of the autobiographical form is David B, one of the pioneers behind L'Association, a publishing collective of French cartoonists.

His best-known work to date is difficult to describe; even its original French title, L'ASCENSION DU HAUT-MAL (literally 'The Rise of the High Ill') does not lend itself readily to a faithful translation. The book's English title, EPILEPTIC, is concise, but not a great deal more descriptive. Certainly the epilepsy that afflicts David's brother forms a major narrative strand in EPILEPTIC, but one of the book's strength is that it's also far more than a simple story about epilepsy. For example, it also details the emotional pressures that drove the author, christened Pierre-FranÃ§ois Beauchard, to adopt his new identity as David B, an act that was as much a statement of personal identification as it was about assuming an artistic persona.

Fittingly for a cartoonist whose work, such as LE CHEVAL BLÃME (literally 'The Pale Horse'), often centres on recalled dreams and nightmares, EPILEPTIC's narrative has an equally dream-like quality. It swirls around like a fog, evading almost all attempts to pin it down. No sooner are we ensconced in one less-than-happy recollection than we are swiftly transported to another, or a troubling dream, or a disquisition in the history of the author and his relatives, or we're given a glimpse inside the imaginative worlds of various members of Beauchard and his family.

Jean-Christophe, David B's epileptic brother, is drawn as being afflicted by lizard-like monsters. As the narrative progresses, similar imaginative monsters become a recurring feature in David's perception of his whole family. Each member seems haunted by the malevolent condition that seems to have literally seized David's big brother. Faced with the prospect of inflicting a partial lobotomy on Jean-Christophe - a cure that seems vastly worse than epilepsy itself - the Beauchard family turn in desperation to alternative therapy after alternative therapy, and then on to various types of religion and spiritualism, in the increasingly vain hope that some non-invasive technique will ameliorate Jean-Christophe's condition.

Like Chris Ware's JIMMY CORRIGAN, EPILEPTIC is far from being an easy read. It is a challenging, often emotionally gruelling book. However, David B's work lacks the elegance of Ware's wonderful eye for design to lessen (however slightly) the cloying metaphysical pain that is at the heart of the narrative. Like a work of expressionism, the iconography and metaphors David B crafts from his own lived experiences combine with the uncomfortable dream-like narrative to convey impressions and feelings rather than document exact occurrences and experiences. It is an effect that is further reinforced in the bleak inky darkness of the artwork, a quality of the author's art that is noted by one of his teachers, the cartoonist Georges Pichard. 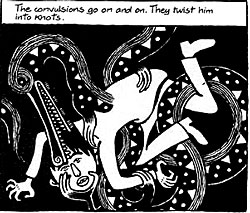 Originally presented as a series of books in France, EPILEPTIC is now available in English as a single unified volume, and is a far more accessible reading experience for this. Translation duties are handled by Kim Thompson, perhaps best known as the co-founder of Fantagraphics. Over the years he has proven his skills as an editor, helping to bring some great comics to a wider audience, but while he can obviously appreciate French, his translations are rather less than elegant. Some passages are translated with brute literalism, where a more adept hand might have favoured a looser sense of people's interactions, and the occasional Americanisms and inconsistencies are especially jarring. Thompson's passion for the comic is undeniable, but I found myself wishing that someone else had served as translator.

Something that is touched on but never fully explored in EPILEPTIC is Jean-Christophe's refusal to deal with the consequences of his condition, and the extent to which the Beauchard family refuse to push the issue. But this is a minor silence that does not have a major impact on what is overall a complex, difficult, well-crafted, yet somehow strangely dissatisfying work.

After 361 pages charting years of the Beauchard family's pain and the author's growth as an individual, all in the shadow of Jean-Christophe's condition, I found the book's ending somewhat disappointing. But re-reading it, I can't see any way else to end this autobiography faithfully. Life is messy, and does not give itself over to neat resolutions. Jean-Christophe is as much a victim of himself as he is of his epilepsy, and what better way to illustrate that than by illustrating the intangible but unbridgeable distance between the author and his brother with a longed for, implausible, bittersweet conversation between the brothers.

Though an epileptic myself, Jean-Christophe often has more seizures in the space of a single day or even a single meal than I've experienced in my entire life. Even so, I was felt slightly disappointed by how little the book had to say about the experience of epilepsy itself. That said, epilepsy is very much a secondary theme to the larger concerns of the impact that Jean-Christophe's behaviour has on his family, and this is where the true power and appeal of this autobiographical comic lies.