There's Borgias, baby-sitters and bicycles in this December's line-up thanks to new books from Jodorowsky, Raina Telgemeier and Sonny Liew - plus the best of Eisner's SPIRIT, and the return of SCOTT PILGRIM.
10 October 2005

Well, it's time for the December Previews... so this should be a list of books to add to your Decemberwe'en list, right? Well, not necessarily. You see, you're now playing a dangerous game here. Will the book actually ship in time for someone to buy it for you as a gift to celebrate whatever winter-based holiday you have on your calendar? Or will it be late? (In the case of at least one of the publishers on this list, the answer is almost certainly 'late'.)

No, sadly, you probably should have been reading last month's column for the November books. How wrong is that?

More importantly, how wrong is it that this column is so short? It's almost like the publishers have already given up before the holidays even arrive. I was expecting this to be my longest column ever, and instead I found myself thinking, just how many times can I talk about SCOTT PILGRIM while I try to pad out the word count?

Ah well. Next month we start looking into 2006, and hopefully there'll be something more exciting on the horizon than watching the biathlon from the Winter Olympics. (Skiing and then shooting... how drunk did they have to be to come up with that as a sport?)

I've liked Duncan Rouleau's art in the past; it's been a nice cross between a style inspired by animation, and something that's very unique to Rouleau himself. The idea of a creature called the Nightmarist appearing in a woman's dreams and saying he's going to protect her isn't terribly exciting in its own right, but it's certainly going to look sweet. If the story is up to par with Rouleau's art, this'll be good.

This is one of my absolute favorite comics, set in a world where mad science has dominated the land, populating it with crazy inventions and even worse creatures. As Agatha Heterodyne discovers her true heritage as the heir of the fabled Heterodyne Brothers, she's got to both master her own invention powers as well as try to stop legacies of other mad scientists from rampaging and hurting innocents. Oh, and it's hysterically funny, too. If you don't believe me, head on over to Girl Genius Online and check it out for yourself; the comic is now being serialised there, with the earlier comics getting added to the site on a regular basis as well. Trust me, it's great.

Sonny Liew's first MALINKY ROBOT one-shot (STINKY FISH BLUES) was an absolute delight to read; funny, beautifully drawn, and so amazingly full of possibilities for other stories. Liew's writing is an almost lyrical stream-of-consciousness that is entrancing to read, and its paired with meandering lines that converge into beautifully realistic cityscapes and crumbling decay.

I've liked Christopher Moeller's IRON EMPIRES books. From what I saw of it, his JLA: A LEAGUE OF ONE painted graphic novel was pretty nice. But a story with the JLA using gigantic battle armour versions of themselves? Well, I guess someone thought this sounded like a good idea, but that someone was definitely not me.

Most people excited about Teddy Kristiansen's issue of SOLO are thinking about the Deadman story that Neil Gaiman's writing. Me? It's more about Kristiansen's collaborations with Steven T Seagle in this issue. I've loved their past collaborations (IT'S A BIRD and HOUSE OF SECRETS) and I expect this to be just as good. Regardless of whose writing you're looking forward to (Gaiman, Seagle, or Kristiansen himself) this promises to be a really good issue of SOLO.

For everyone who's been interested in reading Will Eisner's work on his signature character the Spirit, but has been a little daunted by the high price tag on the (admittedly high quality) hardcover Archives series, now's your chance. Eisner's storytelling on his best stories for THE SPIRIT was groundbreaking, full of inventive page layouts, logo placements, and just out-and-out cleverness. I can only hope that's exactly what's going to be showcased here, and that it sells well enough for another volume or two; there's enough 'best' material from THE SPIRIT to keep people happy for years to come.

The only way I can really describe VIMANARAMA is 'a science-fiction Bollywood romance musical... on the page'. Trust me, though, it's a riot in the best possible way; between super-powered beings, arranged romances, ancient evils, love triangles, and Atlantis, VIMANARAMA has just about everything you could ever want in a graphic novel.

It's my hope that a lot of people have read Jaime Hernandez's LOCAS, the mammoth hardcover that collected all of Hernandez's 'Locas' stories from the original 50-issue run of LOVE AND ROCKETS. If so, they'll need to make sure to pick up GHOST OF HOPPERS, the latest collection featuring Maggie Chascarrillo.

Hernandez draws some of the most beautiful characters in comics, a real celebration of the human form with all of their imperfections, which just make them ultimately more fantastic. Hernandez's stories about Maggie and Hopey over the years are in many ways one of the two best soap operas in existence (the other being Gilbert Hernandez's stories for LOVE AND ROCKETS, naturally) and I can't imagine anyone not being drawn into the greatness that is Hernandez's comics. 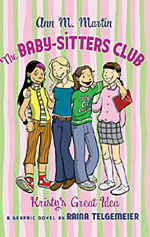 I have a confession to make: when Ann M Martin's THE BABY-SITTERS CLUB books were first published, I used to steal them from my younger sister's room and read them rather religiously. Martin's stories were just fun, with realistic characters and situations that pulled you in effortlessly. It's no small surprise there were around 200 of the books (including spin-offs and special editions) and that for years the books dominated the teenage book market.

Now the series is returning as a series of graphic novels by Raina Telgemeier, and let me just say that after reading some advance pages I can't imagine anyone doing a better job than Telgemeier. She's got a beautiful, stripped-down art style that is great at storytelling, but most importantly, she gets THE BABY-SITTERS CLUB. In just a handful of pages I was feeling the same fun and joy that I felt from the original series. Great, great stuff. I can see Telgemeier making THE BABY-SITTERS CLUB a hit all over again, easily.

My friend Karon went to Paris last year and came back with a copy of BORGIA in French. I instantly understood why she had to grab a copy; Jodorowsky is one of the most twisted writers out there (in a good way) and his telling the story of the depraved and powerful Borgia Family? You can't turn down such a match made in heaven, especially when it's painted by Milo Manara, who I think would make a trip to the grocery store look like a sensual work of art by the time he was done. My university-level French is still a bit of a joke, though, so I'm quite delighted that Heavy Metal is publishing an English-language edition. Don't mind me; I'm just off to go find my poison ring... 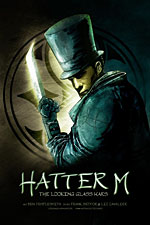 Last year, Frank Beddor wrote a novel published in the UK called THE LOOKING GLASS WARS, with a dark and twisted futuristic version of Alice in Wonderland that was published to both acclaim and controversy. The book's scheduled for a Stateside publication later this year, but in the meantime Beddor's created (with co-writer Liz Cavalier and artist Ben Templesmith) a side-story in the form of HATTER M. The art looks dark and twisted as well, and there's something about the idea of the Mad Hatter leaping through a puddle on the Champs Elysees to search for the Queen of Wonderland while fighting an evil magician that has grabbed my attention. I'm definitely taking a look at this.

I remember thinking that Dan Brereton's GIANTKILLER was a lot of fun when DC published it years ago; lots of gigantic Godzilla-inspired monsters that rampaged throughout the country, with only Jack, a hybrid human-monster, able to stand up to them. Hopefully this means we'll get more GIANTKILLER down the line, but regardless this is one gorgeous book.

I love Dwayne McDuffie's writing; his stories are always sharp and interesting, and I know it's his influence that makes the animated JUSTICE LEAGUE cartoon as good as it is. It kills me that he doesn't have a monthly series anywhere, and in the meantime I'm definitely getting his FANTASTIC FOUR one-shot, pitting Reed Richards and Victor Von Doom against each other in the basement of the Latverian Embassy - with all of Manhattan as their playing field. In another writer's hands this might just be OK, but with McDuffie I know it's going to be fun.

I love YOUNG AVENGERS. I know, I find it shocking too, but it's honestly one of the best monthly series being published right now. Heinberg's a great writer, able to make each issue exciting and fun, leaving me desperate to see what happens next. The idea of a special 'before they all met' issue with a superstar art line up, then? I'm practically jumping up and down. Any new YOUNG AVENGERS comics written by Heinberg is already a thumbs up in my book, but getting Gene Ha, Bill Sienkiewicz, Neal Adams... oh heck, everyone working on this book is great. Fantastic!

What do you get when an idealistic superhero wannabe moves from the Midwest to New York City to try and make it big? If you're lucky, GRAVITY from Sean McKeever and Mike Norton. The two worked together on the great series THE WAITING PLACE, and GRAVITY certainly showed that they still have quite the spark when they team up. At $7.99 for the collection, it's a nice low price for a solid, fun collection. Definitely worth your time and money.

I'm not sure what about the cover for MR Clement's GORGEOUS HARBOUR made me stop and take notice; maybe it was the fact that it was a very simple design, maybe it was the rabbit in an astronaut suit reaching for an envelope. Either way, it led me to Clement's website, and as soon as I saw her art I knew that GORGEOUS HARBOUR was a must-get book. (I especially like the 'Something & Something' section of her gallery.) It's utterly gorgeous, looking a lot like a book that perhaps Top Shelf, AdHouse Books, or Oni Press would jump at the chance to publish. (That's a huge complement.)

I'm not entirely sure what the book's about, to be honest, because the solicitation is wonderfully vague. But it's got a rabbit in an astronaut suit, and Clement's art just makes my heart melt. At 300 pages, I'm on board to give it a try.

I understand that lately there's been a bit of a SCOTT PILGRIM backlash, with people who haven't read the book getting sick and tired of its fans constantly pushing it. So with that in mind, this is me trying to remain cool and calm about the whole thing.

Yeah, SCOTT PILGRIM is all right. It's a good book. Maybe you should take a look and see how Bryan Lee O'Malley effortlessly blends the sensibilities of romance comics, video games, and manga into its own special genre. Or don't. It's good, yeah, but take your time. I'm sure there are always plenty of other people who haven't read it too, so you're in good company.

I don't mean to sound crass, but I'll be blunt here. If Nancy Drew really does get sacrificed to Kali in this graphic novel (as the solicitation text promises), I'll buy 20 copies. Possibly more.