What if the mayor of New York City was a superhero? It's either the most intriguing premise in recent mainstream comics, or the most ridiculous. Brian K Vaughan and Tony Harris mix politics and superheroics in EX MACHINA.
24 October 2005 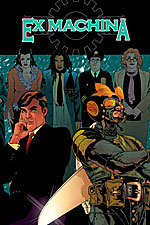 From the simple, anti-fascism message of most science fiction, to the proud, power-mad rulers who populate the sword-and-sorcery epics, fantasy writers have always injected political commentary into their stories - although they've usually done so in a metaphorical way.

Taking on politics - especially American politics - head-on has traditionally been the job of mainstream literature and film. It's rare to find a story that takes an honest, mature look at contemporary politics while incorporating elements of fantastic fiction. In fact, I'm hard pressed to think of an example - other than EX MACHINA, that is.

EX MACHINA centres on Mitchell Hundred, a young civil engineer raised on a steady diet of comic books and political activism. After gaining a few superhuman abilities in a Mysterious Explosion (TM), Hundred, aided by one of his mother's old activist buddies, throws together a costume, dubs himself 'The Great Machine', and sets out to (all together now) rid the city of crime.

Unfortunately, ridding the city of crime is a bit harder than Stan and Jack made it out to be. Mitchell's attempts to rescue the innocent and bring the guilty to justice never seem to work out well. An attempt to foil a bank robbery results in a ten-car pile-up on the Brooklyn Bridge, accidentally killing a police officer. The Great Machine rescues a couple of kids 'surfing' atop a subway car, only to accidentally break their arms in the process. 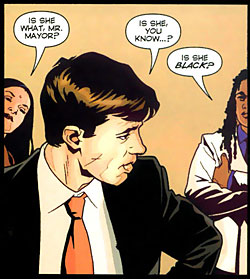 With his luck worsening, and having been made a target by a conservative police commissioner, Hundred decides that the best way to save the city may be to run it. Despite protests from his ad hoc sidekicks, Mitchell hangs up his superhero mantle, goes public, and runs for mayor of New York City. To everyone's surprise, Hundred wins in a landslide. (C'mon - who wouldn't vote for a superhero?)

Hundred agrees, under penalty of prison, to refrain from using or discussing his powers in public -- an agreement that was only broken once: September 11th, 2001.

The first chapter of EX MACHINA ends with the reveal that Hundred used his machine-manipulation powers to stop one of the two hijacked airliners headed for the World Trade Center, saving one of the towers.

While some have balked at this device and have accused Vaughan and Harris of insensitivity (or worse, exploitation), the inclusion of 9/11 in the story seems to have been intended as a kind of mission-statement for the series as a whole; a warning to the escapist reader that the world of EX MACHINA would be as real as possible - at times, uncomfortably so. In that aspect, it worked remarkably well. At the very least, you have to admire the guts it took to dive into a topic that mainstream superhero comics have gone to great lengths to avoid - and to do so in a way that felt both honest and respectful. 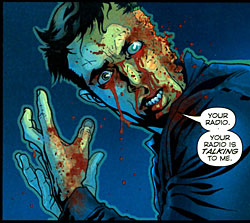 The first arc focuses on Hundred learning how to run a city - prioritising the city's issues, sizing up his advisors, and trying his damnedest to keep the city from eating itself. A blizzard hits town, causing massive traffic problems; a controversial art exhibit opens, resulting in protests and death threats; and a serial killer is on the loose, targeting (of all things) snowplough drivers. Hundred quickly finds himself in over his head, but soldiers on with the help of a likable supporting cast.

Tony Harris's near-photographic artwork compliments the story perfectly, and serves to further the illusion that EX MACHINA takes place, more or less, in our world. Tom Feister's subtly gorgeous inks and JD Mettler's soft, muted colours strengthen the illusion further, proving that a great deal of thought has been put into every aspect of EX MACHINA. This book was made with love, and it shows.

At times, the story's measured pacing and earthy artwork make it seem less like a superhero comic than a primetime drama. Even Harris's choice of 'camera angles' seems to be heavily influenced by television (the standard 'over, over, two-shot' is used several times throughout the book). Not that this is a bad thing - far from it. In the same way that Warren Ellis and Bryan Hitch strove to give THE AUTHORITY the feel of a widescreen action movie, Vaughan and Harris have succeeded in producing a comic book that feels remarkably like an HBO drama series.

EX MACHINA has already received more than its share of critical praise. And if the first volume is any indication, that praise is entirely deserved. The internet backlash will hit soon, I'm sure (if it hasn't already), but as long as the quality of the series stays at this level, we can all ignore the nay-sayers.

After all, it's just another form of politics.

Frank Beaton is a freelance writer and journalist based in Portland, Oregon.