Generations of British children have grown up with the digest-sized boy's own war stories of COMMANDO. Now some of its greatest hits have been collected in a single volume. Ninth Art rediscovers a very British war.
13 February 2006 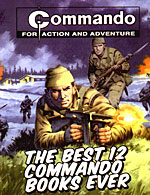 Britain has a long tradition of war comics. Titles such as BATTLE and WARLORD were homes to classic strips like the World War One drama CHARLEY'S WAR, which in turn inspired the work of several modern writers, most notably Garth Ennis. Whole generations of readers have come of age reading tales of British courage in two world wars. But the most successful war comic of all may have flown under the radar of many of today's readers.

DC Thomson's COMMANDO debuted in 1961, and remains in print today, with an astonishing eight issues published every month. Each ad-free, digest-sized comic contains a novella-length black and white story on cheap paper, for the princely sum of Â£1. That's not only extraordinary value for money; it's over five hundred pages of (mostly) new comics, every month.

It seems a shame, then, that it should have taken forty years to produce a Greatest Hits collection.

THE BEST 12 COMMANDO BOOKS EVER is, I would hope, something of a misnomer. Compiled by veteran editor George Low, the book features stories published between 1964 and 1975. One imagines that the book didn't stop being entertaining when Jim Callaghan came to power. 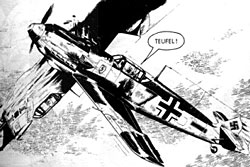 That said, while each story seeks to shed light on a different, often forgotten aspect of the British war effort, they do tend to conform to a certain formula, based on class, personality clashes and indefatigability. This may not necessarily be a bad thing - people take comfort in familiarity, after all - but there's precious little deviation from it.

Additionally, while the stories don't quite downplay the harsh realities of war, there is a certain rosy tint to the book. It springs from a deserved sense of pride in the Allied victory over the Nazis, of course, but there is a tendency to portray the Germans as less formidable than they might actually have been. It is, perhaps, no worse than Hollywood's own dramatic license, and I'm certainly not advocating a sympathetic portrayal of Nazism, but I'd hate to see the scale of the German threat forgotten with the passage of time.

The twelve stories feature work by eight different artists, from the clean, photo-realistic lines of John Ridgway (2000AD, TRANSFORMERS) to the inky, Kubert-esque style of Eustaguio Segrelles. It's a good range, considering the original date of publication, and they share a combination of clarity and dynamism that works very well. The range of artillery, planes, boats and environments employed in the stories is breathtaking. Each is reproduced with a draughtsman's eye, but not one that betrays the requirements of a good story. Indeed, some of the dog fighting would be worthy of the real Battle of Britain. Amazingly, there are no sound effects in the book: the 'sound' of war is contained entirely within the art, and the screams of wounded soldiers. 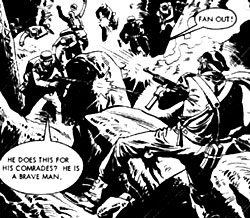 One thing that might surprise the reader is the way the narrative is carried primarily by caption boxes. The format (two to three mostly landscape-oriented panels per page) seems to enforce a certain loose rhythm, where the passage of time between panels is greater, or at least more variable, than in the average modern comic. The caption boxes play a key role in filling in the gaps in the story. It might appear old fashioned, or reminiscent of storyboards to our modern eyes, but it's efficient storytelling, and a far cry from the days when a caption box would merely reiterate what the art was trying to convey.

If there's a criticism to be had of the book, it's that there are no creator credits. Indeed, COMMANDO has never printed the names of the writers and artists that grace its pages. This is unfortunate for those of us raised to know creators by such playful nicknames as 'Sturdy' Steve Ditko, and given that the book serves as a commemorative showcase, it seems disrespectful. (If it weren't for COMMANDO fans like Laurence Curtin, I wouldn't have been able to name any of the artists at all.)

COMMANDO remains a quiet little mainstay of the British comics scene, a product of a time before we became ultra cynical about war. The format and the price make it ideal for the casual reader, even if the storytelling might seem a little creaky. Indeed, if one were looking for a way to produce cheap comics for a mass audience, especially in the new manga-friendly climate, then this might be the way to go. Imagine walking out of your local bookstore with a 64-page OEL manga for less than the price of a Sunday newspaper.

Pipe dreams aside, the COMMANDO hardcover will be a revelation to some, and a nice trip down memory lane for others. Like its parent title, it provides excellent value for money, as well as a refreshing change of pace. It's just a shame that they couldn't have found space on the contents pages for creator credits. Let's hope they can rectify this omission in subsequent volumes and future printings.