Ahead of the publication of Ed Piskor's graphic novel debut, Ninth Art talks to Harvey Pekar's latest collaborator - a 23-year-old cartoonist who could well be the next big thing on the alt comics scene.
19 June 2006

Non-fiction comics have played a small but important role in the history of the modern comics renaissance. Works such as PALESTINE and PERSEPOLIS have gone some way to legitimising the medium in the eyes of the wider world. And MAUS is still among the first books cited when trying to define well-rounded, adult comics.

Perhaps the grandfather of all non-fiction comics is Harvey Pekar's AMERICAN SPLENDOR. In addition to the myriad stories of Pekar's life, the people around him and the musicians who fascinate him, the series has diverged into longer biographical works, such as the Vietnam memoir UNSUNG HERO and the more recent EGO AND HUBRIS.

Pekar's next novel, MACEDONIA, is more of a docu-comic and travelogue than straight biography, but it will likely feature the same fierce intelligence as the author's more personal works. To be published by Random House, MACEDONIA is illustrated by Kubert School alumnus Ed Piskor, whose strip 'Around The World And Back To Earth' closed out Pekar's OUR MOVIE YEAR.

If he's intimidated by working with such an iconic writer, for such a prestigious publisher, then he hides it well; "I was pretty starstruck at first, because I was a fan of a lot of his good comics for a very long time, and the movie was hot at the time. ... I did get over the fanboyish feelings pretty quick because [Pekar] is such a normal guy. After speaking with him, I just felt like I was talking to a cool uncle or something like that." 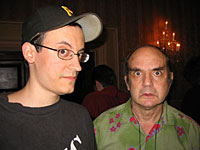 Piskor grew up with comics, and knew what he wanted to do with the medium from the start. "I was looking at old pictures recently, and I had comics as a real little kid instead of a rattle or a pacifier. I've always been aware of the magic of having characters in 'motion' from one panel to another within comic strips. It didn't take me long to realise that human hands produced this amazing work, and I was very fortunate to know that I wanted to produce comics my whole life, as opposed to normal kids who wanted to be movie stars and then firemen, and then teachers."

Piskor's art is characterised by a somewhat cheeky, but very accomplished alt-comics style, utilising lots of solid blacks, careful shading and only slightly off-kilter figure work. His art bears a mature signature that wouldn't look out of place in any of the finer indy comix houses of the last twenty years. The style is hardly surprising, given his influences.

"The underground comics of the 60s and 70s are definitely my initial influence. I came across these things at the perfect angsty formative years, and the underground influence will probably be visible in my work forever. First off these books take off where Eisner and Kurtzman started the upward mobility of the possibilities of comics. After studying those comics, from ZAP up to ARCADE, I then gravitated towards all of those great Fantagraphics and alternative cartoonists of the 80s. The landscape of my cartooning inspiration is so widespread it would take a while to name names, but all the usual suspects are at the top of the list. Kurtzman, Eisner, Kirby, Crumb, Clowes, Ware, Kim Deitch."

Having charmed Harvey Pekar with a selection of his mini comics, and having worked with underground comics veteran Jay Lynch, Piskor set to work illustrating stories for the aforementioned AMERICAN SPLENDOR collection OUR MOVIE YEAR. It was while the Pekar family were on the road, promoting the AMERICAN SPLENDOR movie, that the MACEDONIA novel was first conceived.

"Harvey ended up meeting Heather [Roberson], whose family owned a theatre that was playing the flick at the time. She got to talking about her [Peace and Conflict Studies] at Berkeley, which involved some heavy debates about her professors believing in the inevitability of war on a regular basis, and she would use Macedonia as an example that war isn't always the case in her arguments. She travelled to the Balkans to prepare notes for her thesis and ended up providing them to us so that we could weave this novel." 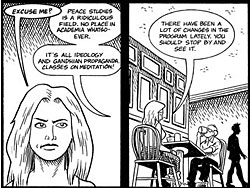 The former Yugoslavian republic remained relatively peaceful after the collapse of Communism, until summer 2001, when internal conflicts arose from the mistreatment of ethnic Albanians, and threatened to tip the country into civil war. An uneasy peace has reigned since.

As with Joe Sacco's PALESTINE, MACEDONIA is a window into a part of the world that most Western readers wouldn't normally see - and neither will Piskor, just yet. The artist is quick to distinguish his book from Sacco's first person journalistic fare.

"I haven't been out of this eastern time zone ever. Heather took a bunch of pictures for me to use as reference, which helps a lot. Thank God for Google image search to fill in the rest of the puzzle. I did my best with all the tools I had at my disposal, but it certainly doesn't amount to much reference material. I think we pulled it off reasonably. If you're going into the book expecting a Sacco-type story, you will be let down though. This story has Harvey's style all over it. The hardest part of the book was just trying to keep it semi visually interesting while the characters are filibustering all over the place."

And indeed, Pekar's articulate, informed style will be an integral part of the book's appeal. But that's not to sell Piskor short. Pekar's idiosyncratic script style has a lot of built-in wiggle room.

"Harvey still does the little stick figure drawings, which leave plenty for the imagination because he barely dictates setting or situation most of the time. Harvey actually lets me have carte blanche. As long as the dialogue is completely intact and I keep things moving clearly, he could care less about what I do on this book, which is great. He gives all of his artists this freedom. ... Hopefully, I made the most of it."

When asked about the potential comparisons between MACEDONIA and similar acclaimed non-fiction comics, Piskor is confident of the book's chances of finding an audience. 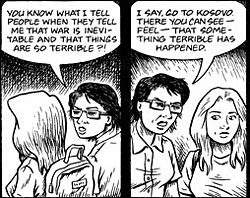 "I think that we have accomplished a pretty decent story, all things considered. Hopefully [MACEDONIA] doesn't read like a textbook, because we are going to require the reader to absorb some information. Being a collaborative effort probably isn't the best approach, because it's not possible to be as intimate, since we each have different things we see as being important to the story, but when it's said and done we have a book here that I can be proud of.

"I can only speak for myself but I'm sure Harv and Heather want to see MACEDONIA go far. I really do want to do a damn good job. I've worked on it for a little over year constantly, so it's very close to my heart."

And in the end, Piskor is sanguine about being thought of as second banana to a legend. "I feel a tremendous sense of responsibility to Harvey on MACEDONIA, because if the numbers on this book do okay, then Harvey looks great to the publisher and possibly may do more books, and maybe he would consider me on those.

"I do know that I am an incidental part of these strips, because who the hell heard of Ed Piskor? People are just going to have to tolerate my artwork while absorbing the writing that they've known and loved, and I can only hope that I develop an audience from working with Pekar. He's got a pretty devoted crowd who are into his stuff, and I'll take any shrapnel that comes from our collaborations."

The artist's modesty notwithstanding, it's hard to see MACEDONIA as anything other than the latest in a line of powerful non-fiction comics. As the medium continues to subvert and exceed expectations, it will likely be books such as this that will take centre stage, alongside the best of the most explosive, lyrical and downright esoteric that the ninth art has to offer.

MACEDONIA will be published by Ballantine Books/Random House at a date to be confirmed. The book will be supported by a signing tour from Pekar and art shows from Piskor. A preview can be viewed at the artist's website, along with an extensive portfolio of comics and illustrations. AMERICAN SPLENDOR will return later this year as a five issue miniseries published by DC Vertigo.