Continuing the series in which Ninth Art contributors past and present look back at the nine comics that mean the most to them, this week it's the turn of pop culture journalist and up-and-coming creator Kieron Gillen
06 March 2006

Kieron Gillen is a videogames journalist and comics writer whose first contribution to Ninth Art was a look at what comics and videogames might be able to learn from each other. He followed that with the four-part essay series Everybody Be Cool, about the relationship between comics and pop culture credibility, and next week he becomes the latest pundit to join Ninth Art's venerable Forecast team.

His comics works include the webcomic BUSTED WONDER with Charity Larrison, his SAVE POINT strips for the UK's Official Playstation 2 magazine with Jamie McKelvie, and his graphic novel debut PHONOGRAM, also with McKelvie, due out this summer from Image. 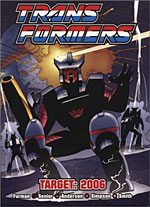 I read what was around me. THE BEANO. The bewildering OOR WULLIE on holidays in Scotland. ASTERIX. Whatever Marvel UK was lobbing out. Now, I cheerily devoured the reprinted US comics, but it didn't quite seem right. I didn't know how old the reprints were then, but even I could tell it was divorced from my culture.

TRANSFORMERS was my culture.

TARGET 2006 was where Furman's Transformer's saga... well, transformed. It had been good before - TARGET 2006 was immediately preceded by IN THE NATIONAL INTEREST, which married governmental-agency paranoia to enormous saurian robots - but this new storyline was something else entirely. The game was raised, the toys played with so hard they broke. In a periodic comic, the sudden sense of freedom in the rush from week to week was overwhelming. We revelled in it. The next issue panel that only displayed the head of Shrapnel being shot clear through by some manner of brutal harpoon seemed like a call to arms, a statement that anything goes. Seven days from first seeing it, you couldn't have kept me away from the newsagents with riot police.

And Impactor. That's who TRANSFORMER comics kids got sniffly over instead of Jean Grey. Jean Grey didn't even have a harpoon for a hand!

I didn't read comics in my teens.

I say that a lot and every time, it's a lie. You can't avoid comics. They permeate life. Diagrams on furniture assembly packaging. Newspapers strips. Your mate's ultraviolent doodles in the back of a maths book, featuring horrible things happening to Mr Rose. Sequential art is everywhere. Even in the fallow teenage decade, I read my brother's 2000ADs and similar. And there was always CALVIN AND HOBBES...

THERE'S TREASURE EVERYWHERE was the final collection, and it's chosen here for far more than sentimental reasons - though it'd be a harder man than I who'd deny the power of a tiger and a boy fucking off over that infinite whiteness at its close. Watterson quit at the absolute apex of the power, with the Sunday strips - a full glorious page for the last three collections - at this point being almost embarrassingly beautiful things, full of invention and life.

I couldn't not include it.

In your life, there are a handful of times when exposure to a new work changes everything. Lots of works change you slowly, sneaking into you and slyly rewiring a few important cables when no one's looking. The times when something just kicks off the top of your head and delves into the grey stuff to make balloon animals out of your neurones are few.

When I walked into Bond Street's Virgin while waiting for the US embassy to open so I could blag a visa to the States as part of my degree course, I was just looking for something to kill a few hours. I picked up WATCHMEN, because I'd heard of it. I wasn't culturally dead, after all. Went to the McDonald's and nursed teas for a few hours, while every single thought I had was processed through a nine-panel filter. The guy who stumbled out afterwards was very different.

Went to the US. Denver. Bedsit. Miles from anywhere. No one drinks, except me, alone. No television for a couple of weeks, and nothing in the room but existential philosophy I was too depressed to start on, and that copy of WATCHMEN.

I read it until I could barely remember having ever read anything else.

Everyone knows WATCHMEN is good. Sometimes I suspect no one really knows the half of it.

KILL YOUR BOYFRIEND
Grant Morrison and Philip Bond
PREACHER: UNTIL THE END OF THE WORLD
Garth Ennis and Steve Dillon 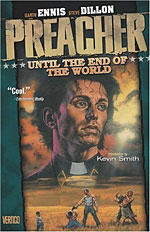 I'm putting these two together, because they're tied together in my mind by two mirrored anecdotes. That is, seeing people read them.

After WATCHMEN I swiftly became a very casual comics fan. A friend, Matt Smith, introduced me to a mass of fledgling Vertigo stuff, so upon my return to Blighty I found myself wandering into a comic shop a couple of times a year to pick up the latest PREACHER or INVISIBLES or things that had the same name as really good Bis songs.

I was living in a basement flat the council had deemed uninhabitable by humans with five other malcontent students. We had fun. We left stuff lying around: books, CDs, comics. PREACHER quickly became adopted by everyone. When the new one arrived it was passed around, read and even read aloud. Keely's wicked screech of a Grandma voice still rings in my ears...

The Angelville arc in UNTIL THE END OF THE WORLD was as good as PREACHER ever got. It was brilliant before and after, but it hit the hardest, emotionally, intellectually, viscerally, comedically when Jesse headed home. The reading I remember was Dan Martin, the least-self-conscious man I've ever known, perched on the edge of the sofa and making sound-effects as he read. He really did. So immersed in this comic universe, he was making machine-gun noises with his mouth, cackling at the top of his lungs at any joke and getting a particularly smug smile on his face with anything vaguely coital. And I quietly watched him, counting the pages until I know a certain girl was going to get her face shot clean away. He hits it and gasps, heartbroken, "Oh no!" and stops, staring at the page for several seconds before hurrying desperately on.

KILL YOUR BOYFRIEND is probably my favourite single thing of Morrison's work: the closest to him actually walking the pop thing as he talks it. Scenes and lines ring as true and smart and stupid all at once as the best pop songs. While Bis cited it, in terms of wit, insight and playful rebellion, KILL YOUR BOYFRIEND punched several leagues above them. The reading I remember was from Josie. Josie, of all my housemates, was the one who was an enigma to me (and, to be fair, me to her). Nice, quiet, more easily embarrassed than most: a girl who'd hate me writing any of this if she ever read it. She came into the living room. She sat down. KILL YOUR BOYFRIEND was beside her. She picked it up and silently started to scan it. She stopped, went back to the first page, then silently read it cover to cover, legs curled beneath her. She put it down, smiled a little to herself and left. She'd never read a comic before. I'd be surprised if she'd read one since.

TRANSMETROPOLITAN: BACK ON THE STREETS
Warren Ellis and Darick Robertson 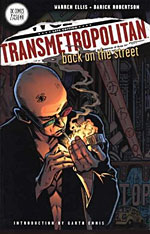 I'd been working as a consumer journalist for about three years, and starting to burn out. Like any job where they hire some kid with no experience to vomit grand torrents of words at great velocity while living in a liver-threateningly hard manner, it eats people. You reach a point where you start to question yourself. Why are you doing this again? Why can't you remember? Didn't you used to be able to look at yourself in a mirror?

I was looking for something. I was generally flailing around - new clubs, new people, new shops, new anything. There's a quote I vaguely recall by Marianne Faithful where, against accusations that the Stones corrupted her, she said that, no, we were ripe. She wanted to fall. That was me then - painfully ripe, ready, looking for trouble, looking for anything.

Spider, at least on BACK ON THE STREET, is a power fantasy for writers, expressed in its purest state. Later he wanders into other territories, but here as he sits perched on a rooftop above a riot transmuting the thundercloud of his rage and sadness into a rain of fingers on keyboard and sweeping away the world...

Put simply, it reminded me why I sat down to try to outstare the blinking cursor in the first place. A short sharp shock, required and necessary. I could have gone one way. Thanks to TRANSMET, I went another, and every stupid, ill thought out glorious thing I've done since has owed something to it.

There's a moment in the third volume of METABARONS where the caption states "...Overcoming Pachydermic Jellyfish" and the panel shows the Metabaron overcoming what we can only presume is a pachydermic jellyfish.

I suspect it's the best panel of all time.

Writing this now, the touchstone that comes to mind for SCOTT PILGRIM isn't any of the ones which I thought would, but something up the list in front of you. TARGET 2006. The line about it feeling as if it came from my culture, an honest product of the world where it found itself, mashing it together into new and joyous shapes. When I found SCOTT PILGRIM, it felt like that. Like, "Why isn't anyone else saying these things? Why does no-one else get it?"

Utterly unpretentious yet constantly inventive, funny and touching (often simultaneously) and completely alive. I can't find anything inside comics that shares anything of the stance of SCOTT PILGRIM. And outside comics, the closest fit I can make is The Go Team.

PRECIOUS LITTLE LIFE is far too precious to be precious over. It makes me want to dance.

Two particularly writerly artists and a particularly artisty writer. After success with McCarthy and Milligan's 'Freakwave' as a back-up strip, Milligan, Ewins and McCarthy got together and somehow talk publisher Malibu into letting them put together an anthology of their freaky shit. Johnny Nemo. Parradax. Freakwave. Three men, one comic, kicking out the jams. Lasted three issues.

I don't need to. From the second I heard of the idea, saw flashes of its art and mulled it over, I've been in love.

It's my lost note. I don't even need to hear it, just know it's out there somewhere, and that someone found it once so someone could find it again.

That's one of the best things in the world.