It's a new Forecast, so what better time to celebrate the new? There's a new collection of Andi Watson's LITTLE STAR, a new role for an old Green Lantern, a new artist for SOLO and, erm, a NEW AVENGERS annual. Three out of four ain't bad.
24 April 2006

BOOK OF THE WEEK: LITTLE STAR 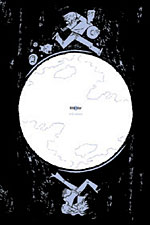 Oh, quit whining already. You've got nothing to whine about.

Look at Simon Adams. He's a Dad. He feels ten contradictory emotions simultaneously, every single day. He'd rather be a part-time worker than a part-time dad, no matter that daughter Cassie won't let him on the sofa, as the sofa is for girls only. "When did my Daughter become a feminist extremist?" He muses sleeplessly to himself. Kids. Kids say the funniest things. And they also break your heart without trying. Little aliens, not quite thinking like us. It's easy to sentimentalise or demonise them, but the truth is more complicated.

A return to his recently more typical everyday affairs (a la BREAKFAST AFTER NOON and SLOW NEWS DAY) than the charming superhero romance LOVE FIGHTS, LITTLE STAR highlights his many strengths. He's always had a way with a metaphor. For example, while indie-comics-about-comics are a perpetual annoyance - when writing what you know is showing how little you actually do - Watson funnelled his observations about the effect of the obsessive-collecting mindset on the adult love affair through the metaphor of a literal junk-collector in his memorable graphic-novella DUMPED. LITTLE STAR moves between the mysteries of the heavens and the mysteries of the home, and finds plentiful poetry there.

It helps that Watson remains an incredible cartoonist with real emotional power and imagination. Simon sitting on the edge of a bed, with eyes as blank staring zombie-black holes in his head, expresses the horror of waking up at 5 a.m. because a tiny person insists you do so. Simon condemned to be free, naked and alone and cast adrift in a borderless white panel. Simon freewheeling away into space, lost in blissful oblivion.

Great stuff. And that's all in the first four pages.

Produced in Watson's characteristic style, seemingly increasingly personal while still breaking new ground, this is a supremely human book with a resilient spirit: one eye on the skies, one on the heart. There's also the nagging suspicion that LITTLE STAR may be his best work ever. [Kieron Gillen] 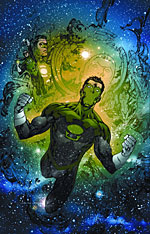 It's a fact of life that there are few things that can be done in a superhero comic that cannot, someday, be undone. Jason Todd was murdered by The Joker and buried by The Batman, but one reality-altering Super-punch later and he's up and about, buying smokes and watching LAW & ORDER.

On the one hand it can be comforting to know that, even when your favourite character has been reduced to a poster boy for Intelligent Design, he could be dancing the Darwin again before the next Leap Year. On the other hand it can be bloody frustrating to see characters you've come to rely on thrown under the wheels of the Wayback Machine.

Spare a thought, then, for fans of former Green Lantern Kyle Rayner. Originally created to be an everyman GL for the 1990s, Rayner was very much a man of the moment and of the people, as he was both a comic book artist and a dead ringer for Keanu Reeves. In this respect, Kyle Rayner was far more relevant to the then-current readership than any previous version of Green Lantern. And despite his occasionally regrettable sartorial taste, he was at the heart of such memorable epics as Grant Morrison's JLA. But in the wake of the animated series and Geoff Johns' restoration of the Silver Age version, Kyle Rayner was more or less relegated to the subs' bench.

This week sees the character reunited with the writer who created him for a new series with a (nearly) new identity. ION is a twelve-issue maxi-series by Ron Marz (WITCHBLADE) and Greg Tocchini (1602) in which a supercharged Kyle Rayner adopts a grotesque new bodystocking, presumably in an attempt to prove that even gods have a sense of humour.

Irrelevant name aside, ION is at least an attempt to make something of a well-liked but ultimately superfluous character. It promises to ask (if not answer) questions about the corrupting value of power: a metaphor, perhaps, for the adventurism of rogue elements within otherwise democratic organisations.

The plot, which sees Ion ring-deep in grand cosmic opera, may appear to take the character away from his everyman roots. But if nothing else, it serves to return Kyle Rayner to the zeitgeist. [Matthew Craig] 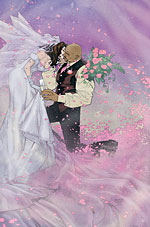 The debut appearance of Jessica Jones way back in ALIAS #1 also saw the first meeting between her and new hubbie-to-be Luke Cage. Well, when I say "meeting" what I actually mean is self-destructive bum-sex. Yes, back when Bendis was shocking us all because he was so good, not because he'd handed writing chores over to Miguel, his non-English-speaking gardener. Now, the character who has charted Bendis' mainstream career reaches her own personal apex - she gets married and settles down with her baby. Yes, that put-upon, forceful-yet-tired private eye we all knew and loved just wanted to be somebody's wife all the time.

But wait! It's not just a pointless extra issue of NEW AVENGERS filled with Bendis' pet characters... It's also a re-teaming of Bendis with HOUSE OF M co-perpetrator Olivier Coipel. I remember the first time I caught a glimpse of Coipel's work on THE LEGION - it was a gorgeous charcoal smudge of Euro weirdness and American brashness. It's come on some since then, gaining more American brashness and less Euro weirdness and sadly losing a little of its charm. Maybe it's that his work looks like a poor man's Steve McNiven. Maybe it's that he obviously drew the last issue of HOUSE OF M during a half-hour bus journey... But there's still the potential and I believe in him.

So if you're not enjoying the NEW AVENGERS current story (A rhetorical question, obviously) then take a chance on the Annual. They only come once a year! So you get to see Bendis take a strong female figure and make her into a downtrodden housewife even less regularly. And to those who think I'm denigrating the important work of housewifes everywhere, you're very, very wrong. So just go and get yourself some prettily drawn vanity project superheroics while I get back to washing the dishes and making sure my woman has ironed socks. [John Fellows]

The countdown has begun to the end of DC's anthology series SOLO. It hardly seems fair to dangle such a jewel in front of the readership, only to snatch it away just when people were waking up to it, but nobody ever said Comics was fair.

This week's SOLO, issue #10, is the prepenultimate entry in the file and features Damion Scott in full flow. Scott is by far the least experienced of the artists featured thus far: his major comics work includes a long run on BATGIRL and a two-part Spider-Man adventure. That said, Scott's art, which combines the imaginative layouts and energy of Scott McDaniel with the freeform cartoon style of Chris Cross, has an infectious kinetic charm that's not easily denied.

Scott's issue of SOLO features stories of death, derring-do and dynamic damsels, and reunites the artist with the characters that made his name. As previews here and here show, the comic features a bright, brash, almost retro colour palette: a perfect match for an artist with such a youthful, punky style.

The final issues of SOLO will showcase the talents of Sergio AragonÃ©s (GROO, MAD) and Brendan MacCarthy (BAD COMPANY, STRANGE DAYS). It's a series for the ages: something to be kept safe and savoured, even after DC gets wise and collects all the Batman stories in one fat trade paperback. It'll be sad to see it go, but we're all the richer for having had it in the first place. [Matthew Craig]