Garth Ennis visits the formative years of Frank Castle in THE TYGER, and Carl Critchlow's cult comic THRUD gets the trade paperback treatment. Plus, the comic industry pays tribute to the late Sam Loeb.
29 May 2006

BOOK OF THE WEEK: THE TYGER 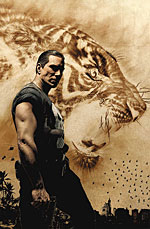 Few things are as reliable in comics as Garth Ennis' PUNISHER. From the first pages of his six-year run on the character, he re-established Frank Castle as a man of pathological determination. And between mining a rich seam of gallows humour and confronting the reader with most of the darker, more vicious aspects of the human psyche, Ennis has also found time to explore the Punisher's past, in an attempt to discover what made him the man-mountain of mayhem that he is today.

Such attempts to enrich a character's origin story aren't always successful - for every BATMAN: YEAR ONE, there's a BLACK CAT (rape is not a Secret Origin) - but Ennis' first attempt, the Vietnam novel BORN, was a more than reasonable effort. BORN posited the notion that Frank Castle had gotten a taste for killing during the conflict, suggesting that the character had simply been waiting for an excuse to unleash his bloodlust. The story took the Punisher a small but significant step away from his hackneyed 'crazy vet' origins, and provided a nice foundation for the character's more contemporary (bloody) adventures.

As a bookend to the Punisher's story (alongside the remarkable PUNISHER: THE END), you would have thought that BORN would be enough. But no; this week sees the release of THE TYGER, a 56-page novella starring a ten-year-old Frank Castle. In the wake of a school chum's suicide, young Frankie Castle encounters a character of almost supernatural proportions - the eponymous Tyger - and starts along the long dark road to both Vietnam and the war at home.

I'm in two minds about THE TYGER. On one hand, it's Garth Ennis writing outside his comfort zone of war stories and superhero 'satire', with the legendary John Severin providing the art. On the other, it's another pre-origin origin story, and as such, another chance to screw it up. Additionally, the solicitation suggests that The Tyger might not be entirely human. This ties in to one interpretation of Frank's inner monologue from BORN - the notion that he made a deal with a supernatural entity of some sort in order to become the Punisher (sacrificing his wife and children in the process) - but it would alter the character irrevocably if he were to be revealed to be a pawn of anything other than his own dark desires.

That said, given Garth Ennis' low tolerance of mystical mumbo-jumbo, it's probably worth waiting to see what the real story is. [Matthew Craig] 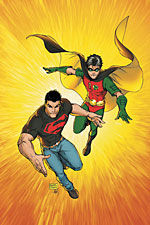 The week after OUTSIDERS penciller Matthew Clark suffered a heart attack, and following on from Chris Claremont's severe health issues, we're reminded that the people whose names we see in the credits boxes of our monthly books aren't just robots - they're everyday folks who have problems like you or I, and who are most decidedly mercy to the same frailties as the rest of us. Clark is expected to make a full recovery, but that's sadly not the case for all comics creators.

In June 2005, Jeph Loeb's son Sam died after a three-year battle with cancer. He was a young talent who was starting to break into comics, and who had been tapped by DC to write SUPERMAN/BATMAN #26, a story about Robin and Superboy set during INFINITE CRISIS.

With talent like that behind it, you can tell that Sam Loeb meant a lot to a lot of people, and this kind of tribute is rarely seen in comics. The creators are all waiving their fees, and the art is to be auctioned in aid of the scholarship set up in Sam Loeb's name.

As I was writing this pick, news came through that Alex Toth had passed on. Let's appreciate the good ones we have left, and remember the ones we've lost. [Alistair Kennedy] 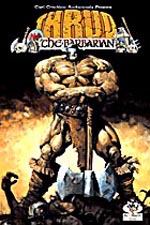 Way back in the mists of time, a man started writing and drawing a CONAN parody which... no, not that one. This was perfectly happy to stay as a Conan the Barbarian parody and not start exploring the fearful woman-void and revisionist religions.

THRUD THE BARBARIAN was created in 1981 when Carl Critchlow was in art college (under the auspices of Bryan Talbot - random factlets grabbed from the internet, fans), making its debut in the fanzines. From there it moved to the place which secured THRUD a place in the heart of anyone who spent a portion of the 80s with mild lead poisoning and high on paint fumes: The Golden Age of Games Workshop's RPG-bible White Dwarf. (That's back in the day when it covered things other than Games Workshop.)

Meanwhile, Critchlow continued his career as a comic artist and illustrator, with his lushly rendered art finding a welcome home in post-Bisley 2000AD. You'll have most recently seen his work in the Simon Spurrier scripted 'Lobster Random'. (In short: Cranky old bastard with mechanical lobster claws on his back hurts people. But funny!) In 2002 he started on a stand-alone THRUD comic, distributed inside the UK, and in 2004 he won the Eagle Small Press Award, which is pretty good going for an eight-foot barbarian with a severe surfeit of musculature and an equally severe deficit of intelligence. And now, at last, THRUD is available through Diamond.

It's distinctly English. Its excesses showcase Critchlows talents for compelling grotesquery. And as the current wave of Barbarian-comics sweeps the shelves ravaging all they can see, it's clear that the moment is ripe for a parody. I suppose it's just incredibly fortuitous that a perfect one was standing on the edge of the scrum, waiting to crack some skulls in a suitably comic fashion. [Kieron Gillen]