Get some big ideas with your comics this week with Seth Fisher's magnificent Marvel swansong, the ACTION PHILOSOPHERS' collected wisdom, and some whimsical implausibility from WOODSMAN PETE.
05 June 2006

BOOK OF THE WEEK: BIG IN JAPAN 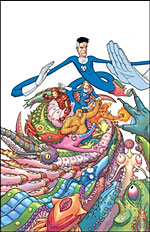 This comic may be remembered for the wrong reasons. Wrong, because it was the last work by the incredible artist Seth Fisher, who died in January, and because he drew himself saying goodbye to the readers on the last page. Wrong, because a coincidence like that can cast a pallor of tragedy over a work that makes readers forget the actual content.

And tragedy is the last thing that BIG IN JAPAN (Marvel) is about. Because like Seth himself, it was mercurial, energetic and weird, weird, weird.

Fisher, who got his start with HAPPYDALE: DEVILS IN THE DESERT with Andrew Dabb, was choosy about his projects, probably to the detriment of his popularity. He worked with writers whose projects were usually infused with his own sense of the surreal - JM DeMatteis on the WILLWORLD graphic novel, XOMBI's John Rozum on the TIME FLIES one-shot.

For JAPAN, he teamed with Zeb Wells, who does his damndest to tailor the script to Seth's relentless imagination. A Sisyphean task, but the book comes off as a wonderful showcase for Seth's elegant and bizarre sense of design as Iron Man and the Fantastic Four find themselves in a battle with ancient creatures with big eyes, big teeth, and tongues where there should not be tongues.

Oh, and all this strangeness leads to an ending that, even without real-world events, may bring a poignant smile to your face.

Seth Fisher was a force of nature, a relentless source of personal and artistic energy that was taken far, far too soon. But the tragedy of his death shouldn't overshadow the sheer fun of both the work and the man. Read BIG IN JAPAN, and remember who Seth Fisher was and what he accomplished, for the right reasons. 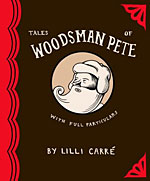 It's my birthday tomorrow. I'll be thirty-one years old. I'm quite depressed about it - although, it beats the alternative - so I'll be spending the day alone, cutting a swathe of consumption across the Midlands in an attempt to fill the gap in my soul with comics.

Which means I won't have enough money for Top Shelf's TALES OF WOODSMAN PETE, which hits stores later this week.

A book-length collection of strips by Lilli CarrÃ©, WOODSMAN PETE is the story of a lugubrious lumberjack with a near-Munchausian grip on reality. Living alone in his cabin, Pete develops a strange relationship with his furniture, including the bearskin rug, Philippe.

CarrÃ©'s mixture of intricate line work and economic anatomy has a subtle charm about it that will appeal to fans of artists such as RenÃ©e French (amongst others). The emotional warmth of her stories (also seen in anthologies such as YOU AIN'T NO DANCER and A PICTORIAL HISTORY OF THE GREAT OUTDOORS) seems to belie the stark black and white printing. Samples of her work may be found here, here, and here. However, a more extensive preview of WOODSMAN PETE was unavailable at the time of writing. This is a shame - not only because free comics are always great, but also because it's harder to sell something when you can't bloody see it.

That minor gripe aside, TALES OF WOODSMAN PETE looks like a perfect summer comic. It's long enough to be satisfying on those long train journeys, but short enough to be portable. It promises to be entertaining without being brainless, and clever without being ponderous. In short, it'll be well worth gambling a couple of quid on.

So let's hope tomorrow doesn't prove too much of a drain on my wallet. [Matthew Craig]

Well... actually, since Marx was in Issue #4, he'll only be in the next trade, but we're not going to be around to use the pun, so better get it out of the god-damn-way now. Time for the Proper Tea is theft gag now? No. Definitely not.

ACTION PHILOSOPHERS (Evil Twin) is a non-fiction comedy comic, and winner of the 2004 Xeric grant. I started following ACTION PHILOSOPHERS with issue #3, where we had a triple bill of Freud, Jung and Joseph Campbell. They're three intellectual figures I have virtually no interest in.

It's a testament to Fred Van Lente and Ryan Dunlavey that upon reading I was:
i) Immediately Enthralled.
ii) Immediately laughing in an embarrassing fashion and dragging over long-suffering flatmates to point out sight gags.
iii) Immediately hungry for the next one.

Generally speaking, there's some fairly quirky choices, at least from this side of the transatlantic divide: Does anyone outside of the US even treat Ayn Rand as a serious philosopher? Let's hope not. She still owes me 1000 pages of my life for bloody ATLAS SHRUGGED. Still - if this trade features anything as good as Derrida as The Deconstructator annihilating the reality of the comic strip or Karl Marx pulling off his shirt and attacking capitalism with an M60 and a handful of hand-grenades, this is as absolutely essential as a comic about philosophy can be. Which, I guarantee you, is about four times as essential as you'd imagine. [Kieron Gillen]