Greg McElhatton was one of the pseudonymous reviewers at Ninth Art's Shipping Forecast for two years, pointing readers to the best new releases every week. He eventually laid anchor at a different harbour, replacing Chris Ekman as the writer on Things to Come, Ninth Art's monthly exploration of the Diamond Previews solicitations.

Greg also writes reviews for iComics.com, and in the past has been the executive director for the Small Press Expo, an Eisner Awards judge, and a founding journalist for WIZARD magazine. (His articles were the good ones.) When not developing training for the US Government, he runs marathons.

Looking at the multiple bookcases stacked full of comics in my home, it's actually been a lot of fun to look back through my memories and pick out the nine comics that shaped my path through the medium. It's been a strange road, and a costly one (I shudder to think if I ever had to add up how much money I've spent on this obsession over the past 23 years), but by the time I was done picking my top nine I was reassured that comics have ultimately given me a better life. Good writing and art entering my life every week? That's a big thumbs up, folks. 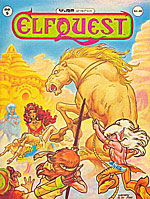 I was in 4th grade when I discovered comics, but not the same way that most kids did. Instead of entering through superheroes, my introduction was via a self-published black and white magazine-sized comic, aka ELFQUEST. There were two girls on my school bus whose father read the book, and he loved it enough that he let them borrow the issues, and every day we'd all breathlessly ask if they'd brought another one with them. I loved fantasy novels, and by this point I'd exhausted all the genre books in my school library and had made good headway through anything else I could get my hands on. This, to me, was heaven.

ELFQUEST was also the first comic I ever bought; I remember going to the gaming store at the mall, which sold a limited supply of comics as well, and going home with a reprint of ELFQUEST #5, as well as the latest issues, #14 and #15. That's when I learned that characters could die in comics, and the four month wait until #16 was published was pure agony.

The series has since moved on into something that's lost my interest, but I still have the collections of those original 20 issues. Those, to me, are pure magic.

I may have discovered comics with ELFQUEST, but it was a while before I read or bought anything else in the medium. I'd given the other titles published by Warp Graphics a quick try (A DISTANT SOIL and MYTHADVENTURES) but when I missed the second issues of each, that was that. Well, for several years, anyway. That's when a friend showed me copies of a modern THE SHADOW, first drawn by Bill Sienkiewicz and then by Kyle Baker. I was mesmerised. This was funny, violent, crazy, and sad all wrapped up into one. With only nine or so issues out, it didn't take me long to track them down and become utterly entranced.

Unfortunately, I seemed to have a knack for discovering series that were about to end. That would all change, though...

I'm not entirely sure why EXCALIBUR #12 grabbed my attention. Maybe it was the knight aiming his lance at poor Lockheed. Maybe it was that someone had just told me about the characters that bore the name Phoenix and I was intrigued. Maybe I just needed to find something else in comics to keep me going. But there it was, staring at me. Asking me to buy it. What came next was a hunt for the eleven previous issues, and which led me to X-MEN and from there it was all over. I was sucked in, and good. 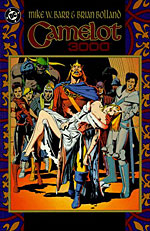 It may sound strange, but CAMELOT 3000 taught me a very important thing that had nothing to do with the comic itself. You see, I found CAMELOT 3000 on the shelves at my school library. Comics? In libraries? This was a whole new world of excitement, the idea that I could find collections of comics treated just like regular books. Wow.

(Don't get me wrong, I really enjoyed the book as well, especially the exploration of sexuality and Bolland's lovely art. But a copy of a comic in a library? That's just crazy talk.)

I wish I could remember how I came across METROPOL. It may have been an ad in Comic Buyer's Guide, which I'd started to buy weekly at a local newsstand in the DC area. I do know that I was buying it from the very first issue, and was utterly entranced. This was so very different from anything I'd read up until this point.

It wasn't the first 'mature readers' book I'd encountered, and I was already gleefully reading each new issue of SANDMAN and SHADE THE CHANGING MAN by this point. METROPOL was different, though. McKeever's rough, curiously structured art was simultaneously distressing and gorgeous, a really unique viewpoint in comic at the time. In many ways, this helped really lead me into alternative and independent comics; METROPOL may have been published by Marvel, but understanding and liking this was a good introduction to the smaller presses.

I won't deny it; McKean's opus CAGES isn't perfect. It's a bit over-written in places, and in some ways it's McKean unleashing all of his tricks in one 10-issue story. It was the first series that I found myself buying specifically for the art, though. Up until that point I'd always searched out books based on both writing and art, but this was a book that I wanted to see simply because it was drop-dead gorgeous.

As it turned out, I did quite like the writing, and I think that McKean gets stronger with each issue. But it was a new concept for me; reading something not because of a strong story, but rather because I wanted to simply stare at it for hours. (Now, in my entrance hallway, I have a collection of original comic art framed and hanging. The one exception? A signed CAGES poster. I'll never be able to afford a McKean original, so this is the next best thing.)

LOVE AND ROCKETS: THE DEATH OF SPEEDY
Jaime Hernandez

When I went to university, I made friends with a professor and his best friend, who were both big comic geeks. Over my four years in town, they showed me all sorts of great comics, but there were two in particular that stuck with me. The first was Jaime and Gilbert Hernandez's LOVE AND ROCKETS, with THE DEATH OF SPEEDY in particular standing out.

Both of the Hernandez brothers have created truly amazing stories in LOVE AND ROCKETS, tales of life in Chicano neighbourhoods and South American towns, but told in a way that make you feel like you've lived there all your life. THE DEATH OF SPEEDY is in many ways Jaime Hernandez's crown jewel in his 'Locas' stories. It's an emotional rollercoaster from start to finish, and knowing the end of the story (the title sort of gives it away, right?) spoils absolutely nothing.

I'd read many a story about 'real' people in comics by this point in life, but this was the first one where by the end of the story I felt like I'd actually met everyone involved, and wanted to see more of their lives. If you've never experienced LOVE AND ROCKETS before, this is a great place to begin. 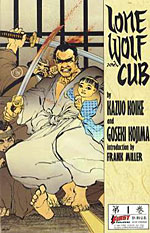 The other of the two books that stuck with me courtesy of my friends in university was LONE WOLF AND CUB. First Comics had many years earlier published square bound comic collections of many of the stories, and this was my first exposure to the series. It wasn't my first manga experience (thanks to Epic's reprinting of AKIRA) but LONE WOLF AND CUB was in many ways the book that really opened my eyes to the idea that Japan's comics scene was very different to that of the US. This was a huge, best-selling comic from Japan that had absolutely nothing to do with superheroes. How did that happen? Was such a thing possible? My head was exploding.

Then again, it was easy to see why a culture that embraced comics (instead of ghettoising them) would love LONE WOLF AND CUB so much. Koike and Kojima tell a gripping story of a vagabond samurai who, cut loose from his position with the Emperor, travels across Japan with his infant son and helps others for a fee. What at first seems like a group of random encounters, though, turns out to be much more. It's a great story structure, pulling everything together without seeming forced, and by the time the main plot gets rolling it's hard to imagine anyone not being truly hooked on the series. For a 38-volume series, LONE WOLF AND CUB never gets boring.

When JLA #1 was published, I'd really fallen away from superhero comics. I still read the odd title but I must admit that I saw the genre as a whole as a write off. Enter Grant Morrison. If you've never read Morrison's JLA, definitely check out the first collection, BRAVE NEW WORLD (value-priced at $5.95). It's a marvellous introduction not only to DC's heavy hitter characters, but to the craziness that will define the rest of Morrison's run.

Morrison reminded me through his work on JLA that it wasn't the genre that bothered me, but rather the substandard work. Morrison not only hit some amazing highs writing JLA, but inspired a lot of writers to try and do the same with their own work in the genre. Morrison reminds us that there's no such thing as a bad genre of comics; no matter what, you can always find a gem.