The past weekend of the 1st and 2nd of June saw the annual UK Comics Festival take place in Bristol. Now just barely recovered, the award-winning Nick Locking (no, seriously) has this report.
07 June 2002

All right, I won an award. The UK National Comic Award for Best Online Strip, for THE ATROCITY, the insane humour strip that I created last year with artist Tony Rollinson and colourist Rachel Young. Read it at NextComics. I promise not to mention it again.

My god, I was drunk. Pissed out of my mind for just about three days, calming the raging beast of a massive hangover by throwing as many girlie drinks as I could convince people to buy me at it. With that in mind, consider that, with my already legendarily poor memory, much of the following is half-remembered through a foggy drunken haze, and I could be making half of it up.

Bristol was fantastic. For those of you who don't know, the UK Comics Festival is the UK's biggest comics event, taking place every year in Bristol, a two-hour train ride away from London. Not as large as the American conventions, but still fairly well sized, the festival sees the majority of British comics talent, a selection of the best talent from around the world, and hundreds of British comics fans all flocking together to attend. And all of the attendees basically drink themselves into total oblivion for three days straight, occasionally stumbling out of the bar to attend a panel, buy some comics, or attend a signing. 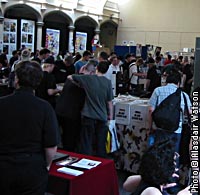 Bristol differs somewhat from American conventions - the nerd-factor is turned down quite a lot, and only a handful of social rejects wearing costumes are traditionally in attendance. The urge to get a gang of drunk comic fans to kidnap Darth Vader and hang him from the ceiling by his ill-fitting cape was almost overpowering, but luckily for the Empire, we resisted.

The heat! Dear god, the heat. I honestly thought that Bristol was located in England - apparently I was wrong. Bristol is actually located fairly close to the centre of the Sun. Sweltering, appalling heat was the norm throughout the weekend, and entering the hall, and especially the two talks rooms, was akin to pushing through a solid wall of sweat. Some of the guys dressed as stormtroopers should have been shooting everyone with deodorant blasters, I can tell you.

The celebrity status of comics professionals is debatable. Big fish in perhaps the smallest pond of all time, comics pros mingled with non-pros throughout the weekend - it's surprising just how friendly and amiable the pro community is, or at least the portion of it represented over the weekend. Almost every professional in attendance was surprisingly friendly, and several were pleasingly candid about their views and experiences. Avatar's Will Christensen even gamely impersonated a Spitfire for the purposes of a bet.

The small size of the comic pro community means there can be very few actual celebrities - a readership of a hundred thousand people is a fine thing, but it's peanuts compared to prose fiction writers or television celebrities.

I think that's kind of nice. It's perhaps the nicest thing about the comic industry being such a small part of pop culture - creators aren't held in any godlike standing.

The only real 'celebrity' at Bristol was Grant Morrison, strolling around in a sharp suit, holding court wherever he went. The movement in the City Inn bar on Friday night was obvious - everyone sidling closer to Morrison, hoping for an introduction and some choice words of wisdom.

The panels! Now, I didn't go to the publisher panels - the sweltering heat made them fairly unattractive, and really, I could just wait for the inevitable press releases telling me of the exciting new releases and so on from the major publishers.

I did, however, attend Lee 'Budgie' Barnett's excellent Hypotheticals panel - the third in three years - in which Dave Gibbons posits various questions to a selection of industry professionals (including Joe Quesada of Marvel, Jim Valentino of Image, Mike Carey, John McCrea, and Ninth Art's very own Antony Johnston) about their actions in a given hypothetical situation, which was interesting stuff to say the least.

Also of note was the All The Rage panel, featuring rumours and scatological tales (sometimes quite literally), run by Rich Johnston, the comic industry's dirty laundry inspector.

Featuring such luminaries and comics notables as Dez Skinn (of Comics International and various other British comic publications) and, well, me, All The Rage was hilarious, and featured a surprising amount of stories involving comic pros and fecal matter. (Exact details of the panel cannot be disclosed, as all those attending were sworn to an oath of secrecy.)

Rich's weekly rumour column is moving soon to Comic Book Resources, and it's always a fascinating read. There, Rich. You can destroy those negatives now, please.

Attendance was down, I think, from last year. Holding the event on the same weekend as the Golden Jubilee and the opening games of the World Cup (which most of us stumbled down to the bar to watch faithfully every morning) was a bad move, but still, hundreds of people still made it along. Hundreds of avid comic readers, people interested in comics, people who like the form.

And ok, there were a lot of sweaty horrible nerds around - a few minutes with a cattle prod and some sort of disposal truck would have done the place a world of good - but for the most part, it was just about a load of lads and lasses having a really good time. And really, that's the sort of thing I can support whole-heartedly. Mark me down for next year.

Check out Ninth Art on Monday for the latest word from several of the festival's high-profile attendees, including Axel Alonso, Karen Berger, Jamie S Rich, Chris Staros and William Christensen!

Nick Locking is the award-winning co-creator of THE ATROCITY, and the writer of the forthcoming ROBOCOP: SIMPLE MACHINES.