There's more to the iconic power of comics than Superman. Comics are a great resource for iconic images; yet only in rare cases does the 'look' make the crossover into fashion.
02 December 2002

No, really. Don't look incredulous. I know you want to believe in me as an avatar of pop-culture elitism. And, God knows, I hate to break any illusion that may eventually lead you to sleeping with me, but it has to be done.

I don't read enough of the style mags. I wear too much black. I got into Miss Kittin a full year after Miss AMP was hailing its cliterati credentials. Oh, sure - I'm probably cool compared to you, but in the universal scale of things, I'm nothing, honey.

However, more than a little, I aspire to be cool. The standard cultural wisdom, of course, says that to aspire to be cool means you'll never be so. This is bullshit - with the coolest people of all, you just don't see the joins through a careful and protracted personality polish.

So I'll buy cool things from the sharper edge of progressive culture (not necessarily youth culture, but most often) like - say - a Gonzales LP, a REQUIEM FOR A DREAM DVD and last INVISIBLES trade, and hope they rub off on me. While "guilty pleasure" is a vile phrase reeking of puritanical disgust, even the most pleasure-principle orientated will admit that there's pleasures which they're more proud about indulging in than others. These are the cool ones.

A tiny fraction of people are cool - the rest of us will get by with a little chill-conduction.

In other words, aspiration. The masquerade of identity. Image.

Fashion. In the first part of this series I was fairly dismissive towards it. Well, by hailing the multifarious nature of words I can avoid charges of hypocrisy and still redress the balance. In particular, by talking a little about dressing. That is, fashion as dressage rather than fashion as shifts in the cultural currents. 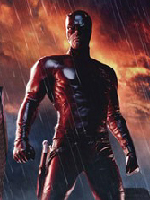 And one thing comics love is clothes. The perennial problem for traditional superhero comics is that costumes that look like they'll engulf entire neighbourhoods in a symphonic sweep of spandex and spangles become laughable when taken out of two dimensions. They work because the visual component of comics synergy allows a subjectively scaled approach to make anything fit.

In the same way a perfectly drawn human is the most ludicrous thing in the middle of a Dali landscape, moving a costume that works in its own completely crafted subjectively-rendered context into the real world looks ludicrous.

I mean, look at the DAREDEVIL movie pics. It's an M&S take on S&M.

But in their own world, comics can get away with fashion disasters beyond a starlet's worst award-ceremony nightmares. Conversely, due to the perfection possible through a created subjective universe, comics allow a perfect model that can make almost anything look great. Comics providing a first cause for fashion movements, however, is rare. Much mention has been made of a connection between various elements of perennial fascist bad-boy Judge Dredd and the similar-period British Punk movement, but that seems to be more a shared moment than direct cross-cultural dialogue.

Occasionally fashion takes from comics for ironic or - more often - merchandising reasons, tying in with a film. Your correspondent has a horrible memory of DICK TRACY-yellow trenchcoats being pushed at a similar time to the Warren Beatty film. And despite The Prodigy's Keith Flint's crab-haircut's only earthly predecessor being Wolverine's ridiculous hairpiece, it's probably pushing it to attribute the X-Man as inspiration.

But then there's TANK GIRL. 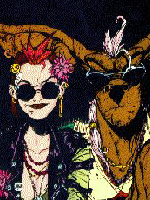 When Jamie Hewlett and Alan Martin created the Tank Girl by sticking together a beautiful polyglot of all the elements of joyous visual rebellion, they were creating an archetypal look that launched a million girls into bovver boots. It's important to realise that TANK GIRL is still used as a reference point when describing looks in fashion. This is because she was such a perfect, undeniable image of colour and shape. And one that's only ever really possible in comics. Comics, in short, are good at being iconic - specifically, creating iconic figures.

And don't get the wrong idea there. In comics, the phrase "iconic" has been appropriated terribly by The Wrong Sort Of People in the same way "continuity" has. That's to say, something that's normally highly useful - continuity means "Is Your Story Internally Coherent", y'know - has picked up all sorts of mad connotations.

So, yes, Superman is iconic. But so is Enid from GHOST WORLD. More so, even, as Enid works as well as a paragon of a certain type of Modern-Democracy Girl and Superman doesn't work as a Paragon for anything, really, bar Truth/Justice/Apple Pie abstracts, and they're a little too abstract to really give a toss about.

If you're looking for a character to gather a whole selection of thought-forms together, comics have an undeniable precision and power. The fact that such incredible forms of fetishisation are possible in terms of looks in the superhero is exactly the same strength that allows the creation of suitably striking and iconic characters that can draw together and reiterate a group's sense of cool. 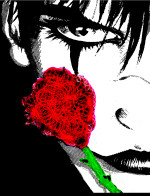 To choose a sub-class that's cool in its own little auto-perpetrating mini-world, Goth (which is a terrible misnomer; let's go with "dark" to make it sound a little credible) culture, has crossed paths with comics to both find core ingredients and to re-state cultural identity. Comics -SANDMAN, JOHNNY THE HOMICIDAL MANIAC, THE CROW - tie together a lovely bundle of ideas and express them in a deeply pure way.

It can't really work in film. Nothing's ever that exquisite in the real world. Animation has a tendency to tarnish the perfection of a chosen pose. Only in pure image do we get this kind of immaculate distillation, a moment chosen in time. And a series of pure images, placed in sequence to drive narrative, allows a specific emotional resonance - i.e. What Happens To Them - to assist the strength of the non-specific emotional resonance - i.e. My God, That's Cool.

Comics can express a cool icon with a purity that other forms can only envy.

And they inspire, and resonate.

So when I roll over in the morning and look at my girlfriend, and a little Tank Girl facsimile as drawn by Jhonen Vasquez is looking back, all scarlet hair-dye and khaki...

Next month: Cool as transgression and cool as expression. And a happy new year.