People who don't read comics still believe that the medium is just for kids, to the bafflement of anyone who's ever gone looking for kids' comics. Ninth Art talks to 12-year-old Jacqueline, to find out what a girl wants.
24 February 2003

Take a look around your local comic shop this week. Just stand there and take a good long look at the clientele who frequent the store. In slightly over 95 out of 100 of stores, you'll only see one kind of customer - males between the ages of fifteen (generally buying SPAWN) and forty (generally buying AVENGERS). In four of the other five, there may even be gurls (generally buying LADY DEATH, if CrossGen are to be believed). And in that final, elusive store, you might see that most rare of comic book consumers - a child.

In an age where every second comic book-related newspaper headline reads 'comics aren't just for kids anymore', we have to face up to the sad fact that they're rarely for kids at all. This is partly because of the marketing hangover from the early '90s that forced crossover stories into every title in a company line and forced the kids who bought them out of the comic stores altogether, and partly because of the still-prevalent worship of continuity that requires an encyclopaedic knowledge of 40 years of storylines - and in Marvel's case, an encyclopaedia.

So what's the problem? Where did all the kids go? How come children enter comic shops, stock up on their YU-GI-OH and leave again? What, in short, do kids want from their comics? Well, it's not good sitting around waiting for the industry to decide what kids want; it's better to go directly to the only person who can genuinely tell us - a kid. 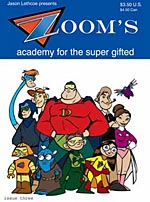 Jacqueline is twelve years old. Her record collection includes both Jimmy Eat World and Atomic Kitten, and her comic reading tastes are equally varied. The first thing we all want to know, of course, whether outside observers or industry moguls, is the answer to the elusive question, "What makes kids want to pick up a comic?"

For Jacqueline, the answer is clear. "If it had girls on the cover, that would make me want to read it. Heroines are better than heroes."

And what if it were a comic without a female star? Would that put our test subject off? "Not if it was interesting. The only comics that I wouldn't want to read are ones that look boring. Ones with children and animals are the best. Just as long as it's colourful."

Colourful? Jacqueline's comic reading habits include ZOOM'S ACADEMY, AKIKO, CASTLE WAITING and ALISON DARE - all comics with strong female protagonists, but also ones that are published almost exclusively in black & white. Which is it to be?

"No, no, the covers have to be colour. The insides can be black & white or colour or anything. But black & white covers are confusing because you wouldn't be able to work out what was happening. Plus you need to be able to see what colour their costumes are." Costumes? "Well, whatever they wear. And it needs to have a picture of something that happens in the comic on the front. If it's just a picture of the character and it doesn't happen in the comic then it's cheating."

When pressed, Jacqueline does admit to having a favourite comic, and it's one that will surprise nobody with even a passing interest in children's literature. 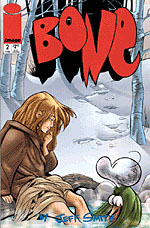 "I like BONE the best, because I've been reading it for a long time now and you get to know them all. Thorn's a girl but she's not the most important person in it, so I'd still read it if she wasn't in it. Also, it's got serious parts and funny parts." Is humour important? "Oh yeah. If a comic's just serious then it's boring. I like YOUNG JUSTICE because Impulse is daft - oh! And SPYBOY! I like SPYBOY too. But yeah. It has serious bits with Secret and whoever but Impulse is funny."

This mix of superheroes and non-tights books is interesting - perhaps the traditional universes do hold some appeal for today's kids. But it quickly becomes evident that such a statement comes with huge caveats.

"The Fantastic Four are good because they're funny, but I get bored reading them because the stretchy guy uses all these confusing words about molecules and his inventions and things. Spider-Man's the best because he's easy to understand and he's funny."

At this point, Jaqueline becomes pensive. It seems she's struck on a goldmine of an idea. "There should be, like, a Superdog..."

But there already is a superdog. He's called Krypto. "Ah, but this one would be actually called Superdog. And he'd have five puppies. And he'd go out and save dogs from the cats."

Right, so, moving on... "And the cats would make people come to the theatre and brainwash them into becoming cats. They'd be putting on CATS and anyone that saw it would become one of them."

Anyway. If we could just talk about... "And they'd be cats dressed as humans dressed as cats and Superdog'd save them."

So. Other favourite comics. Jacqueline's second choice is, again, something of a staple of the kids' comics market. "AKIKO's really good, because it's about a girl, but it's also got a robot in it. And Poog's really funny, and she goes to other planets and stuff. Plus she's got nice hair."

Lest the implications of Jacqueline's recommendations for comics stray into ever more esoteric areas (images of Spider-Man with bunches spring to mind), perhaps it's time to moot one of the most important questions the comic book industry faces at the moment - trades or singles - and the answer is surprising...

"It's better just to get the individual issues, because they're easier to read. If you're a new reader and you haven't bought a comic before, if you buy an issue you can tell whether you like it or not and it's cheap and you don't need to buy any more, but with a book you have to spend a lot of money and maybe you won't like it. With an issue you can try it out. A book takes up loads of space in your bag, but an issue is handy and you can read it on the train."

With the stigma that's still attached to comics these days, would Jacqueline want to be seen reading one on the train, though? "Yeah. I wouldn't be the weirdest person on the train. You see some really strange people. Besides, it's better than reading a book on something boring like chess. Reading comics is cool."

So what have we learnt? Kids, particularly that elusive 'young female' demographic, want stories that feature characters they identify with. They want humour. They want a range of different subject matters, without needing to pay attention to a large number of other titles. They want affordability, complexity without obfuscation, a story that hold the reader's interest and characters that the audience cares about.

Pretty much the same things we all want, then.