Space remains a place of infinite mystery - and in ORBITER, one of those mysteries makes its way back to Earth. Ninth Art boldly goes where Warren Ellis and Colleen Doran have gone before.
01 August 2003 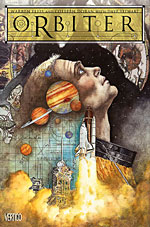 For a final frontier, space has certainly provided a lot of stories, and Warren Ellis and Colleen Doran are the latest to take a shot at the stars with the hardback ORBITER.

The premise is simple enough. There have been no space shuttle launches for ten years after the space orbiter The Venture disappeared moments after launch. Then one day it comes back, covered in organic skin and with just one surviving crew member, and it appears to have been to Mars. So what the hell happened?

Unlike Ellis's mini-series MINISTRY OF SPACE, which comes across as a sci-fi Elseworlds, ORBITER is rooted in this world, with the reactions and the politics being exactly what we'd expect to see. The cancellation of all shuttle projects is all too believable post-Columbia (ORBITER was written and drawn before the 2003 Columbia disaster), and the military paranoia is exactly what we've come to expect from armed forces across the globe in recent years.

So the setting is convincing, and the story gets off to an ominous start. The mystery then builds over the next 100 pages as the cast tries to piece together what happened to the orbiter and her crew.

Where possible, Ellis has tried to keep the science real and comprehensible - the one exception being the very hypothetical physics he uses to explain how the ship has travelled. It has been argued that the book is laden with Tom Clancy-style technical dialogue, but it's my belief that by showing the audience the complexities of these systems, Ellis adds to the audience's appreciation for the incredible achievements of space travel; it shouldn't be portrayed as just a piece of piss.

It might be said that the book spends too much time on the mystery of The Venture, and not enough time on explaining the truth of what actually happened, but Ellis has structured ORBITER like a prose mystery novel, and for the most part it's a successful approach. The story starts out slow, picks up the pace, and ends with pretty much everything happening at once.

Colleen Doran's artwork is beautiful; incredibly intricate and detailed, equally adept at depictions of a shantytown as at capturing the high technology of a space shuttle. The full-page splashes are particularly impressive and will no doubt be hunted down by avid collectors. The painted cover shows us an almost generational story of man traveling from the ocean seas to the oceans of space in a single image, evoking a real sense of wonder and awe. (As Ninth Art staff writer Paul O'Brien has pointed out, it's a little like the opening of ENTERPRISE.) 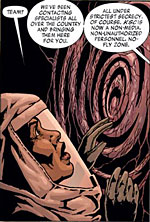 Doran is also one of the finest artists in the business at capturing degrees of emotion. Unlike other artists, who seem only capable of wide grins, straight lips or exaggerated frowns, Doran has an excellent emotional range. Of course, this means that the reader is actually left disappointed in those rare instances where the expressions are a little flat. For the most part, Doran excels, as in the ever-subtle and changing but always realistic body language, the excellent use of variety to make talking scenes constantly interesting, and the detail on and inside the shuttle, all showing that this has been an incredible labour of love.

Doran is wonderfully aided by Dave Stewart on colours. Some of the tints and shades he pulls off here are incredible. Bad colouring could have ruined one particularly gory page, but Stewart manages to juggle enough different hues of red to ensure that it doesn't just look like one big lump of blood lying in puddles around the people.

Throughout the book there is an incredible attention to detail. All three creators have really raised their game on this story. Indeed, when you take in the production values, it's hard to argue that this hardcover isn't value for money. The creators have really put in the work to make it worthwhile.

It might be claimed that the book ends where it should be starting - with an adventure. But Ellis' story - by not showing us everything and by hinting at other things - pushes the imagination onwards, and that's the point you feel that he's trying to make here. This is not just a book about the death of the space industry; he's using it as a metaphor for the death of the imagination.

By telling the story the way he does, he's forcing us back into thinking about what happened, and leading us to discover our own imaginations again; he's inviting us to experience some wonder. However, he's not holding us by the hand and leading us through the door; he's just pointing the way and letting us discover the path for ourselves.

The mission to relaunch the Venture is a call for the relaunch of our imaginations.

Craig McGill is a journalist who has written for Time, The Guardian, the Daily Express and the Sunday Mirror.