>> The Book Review: The Horde
>> What About Bob? An interview with Bob Schreck, Part Two

Murder is a bloody business - but all the more so when there are vampires involved. Ninth Art uncovers the under-appreciated talents of writer Patrick Neighly in his crime-horror fusion, THE SUPERNATURALISTS.
05 December 2005 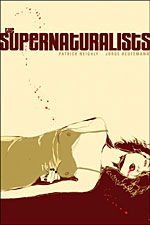 Patrick Neighly is best known as the co-writer of ANARCHY FOR THE MASSES, the almost mind numbingly comprehensive examination of Grant Morrison's THE INVISIBLES, which is a crime, because in a very brief period of time he's become one of comics' most versatile and daring writers - and one of its most unique publishers.

Calling his first work, SUBATOMIC, one of the best comic debuts I've ever read would be an understatement. It's an odd book, a spy story that's not about spies and not even really about spying. It's a book about the United States, and I don't mean in a 'young writer with a first novel trying to capture the world in a way that will make the writer seem brainy and intellectual' fashion. I mean that the book tries and succeeds beautifully in getting at the core of the country and its people.

Neighly has since gone in entirely different directions with books like TEXARKANA and GREAT APE, as if to prove that he not only has more than one story in him, but that he's interested in - and can handle - more than one genre. THE SUPERNATURALISTS, with art by SUBATOMIC's Jorge Heufemann, is one of his best works. That it's good isn't surprising if you know Neighly's work, but that it manages to be this good is shocking. It's not just entertaining; Neighly is interested in combining story and genre elements in a unique way, and THE SUPERNATURALISTS manages to be both a departure and a sign of artistic growth.

If that weren't enough, it's far and away the most creative and unique vampire story of the past few years. That's not 'creative' in the euphemistic sense in which it's typically applied to contemporary vampire stories (as in, "oh my god, what the hell happened to their brains and why did I spend money on this piece of crap"). I mean creative because, while some story points may seem familiar, there's never been a vampire tale quite like this.

Edgar Drake should be living the easy life as a New York homicide cop whose wealthy father happens to be the chief of police, but he's been on everyone's shit list since bungling a kidnapping case years earlier. Drake looks into a murder, a man found in the Bowery with a puncture wound on his neck, and it quickly becomes a series of murders.

The killer moves uptown and kills the wealthy father of a senator at a party, leaving him to die in plain sight. Then Drake meets Esme, a mysterious Eastern European woman who is obviously (to the audience, though not to the characters) a vampire. She's young, attractive and obsessed with Drake's case. She's come to New York to visit an old friend, one of only two vampires she's ever met, a bass player who lives in Harlem. Before long, the identity of the murderer is revealed, the senator's own agenda comes into play, and Drake and Esme are forced to go on the run. 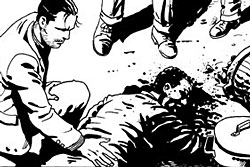 It's a dense story in some ways, with exposition and plot squeezed into almost claustrophobic panels as the story builds by quickly jumping from one scene to the next, introducing new players even while leaving their identities and their motivations obscure. Drake's investigation progresses mostly by luck as the serial killer gets sloppy, but it's in the second half of the book that the story takes off as the pace ramps up.

Heufemann's art is fabulous. Some artists work brilliantly in black and white, and he's certainly one of them, eschewing grey tones and presenting sometimes harsh and always beautiful inked pages. I don't know if the plan was to do the book in black and white all along, but I wouldn't be surprised to find that the decision was made after Neighly saw the pages. They need nothing else. Heufemann was able to convey so much with a few simple wrinkles shifting from one panel to the next, managing to convey more emotion in that detail than some artists could pull off in pages.

He also manages to pull off a period setting, not by obsessively over-drawing the scenes, but by treating each panel as naturalistically as he would in a contemporary story. He knows that, just as with writing, it's best to hide the research and try to make it look easy.

If Neighly were a novelist or a filmmaker, works like SUBATOMIC and THE SUPERNATURALISTS would have made him the toast of the town. But he's a comics writer with his own publishing company, which means his work is little known and hard to find. It also means that he can do whatever the hell he wants, and that's a great thing. One of his upcoming projects is an ongoing SUPERNATURALISTS series, and I'll be buying it the day it comes out, because even if Neighly goes easy on himself and just writes the graphic novel bigger and longer, it should be well worth reading.