Ben Wooller, Ninth Art's man in Australia, recalls the nine comics that he treasures the most, including a few tattered issues of X-MEN, STAR WARS and GI JOE, the works of PAUL POPE, and a rare Australian original.
24 April 2006

Columnist and reviewer Ben Wooller has been writing for the site for over four years, contributing reviews of books such as POP GUN WAR and MR PUNCH, and articles such as his profile of Paul Pope and his interview with Ben Templesmith, as well as weighing in on The Forecast. He works in child care and is a research assistant on a children's literacy project, and he's also currently working on his PhD, on the subject of comic books and the tarot. 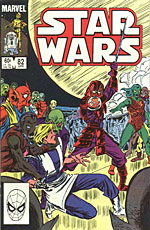 A beachside suburb, the hot Australian sun, a picnic with the grandparents, and me a world away with my nose in a comic. STAR WARS dominated my childhood, and in the years before video, I had to make do with the Marvel series to keep me going. Every month or so the family would make the long drive south to my grandparents place, and my grandfather would hand me the latest issue (and occasionally one of the toys - usually the obscure characters who appeared in the background of one scene, with their pre-Expanded Universe names: "Walrus Face" and "Snaggletooth"). I remember him reading the comics to me when I was too young to read them myself. I've never quite captured the magic of how to read comics out loud to others.

Issue #82 is the only Marvel STAR WARS comic I have left, a legacy of a time when George Lucas wasn't that worried about the direction his characters were taking - and continuity? What continuity?

Once the STAR WARS comics ended, my grandfather started buying me MAD Magazine. He owned some old digest editions himself ? thick paperbacks, with 60s references I didn't get. He started buying them for me just as the title began to wane: Don Martin jumped ship soon after, but Al Jaffee, Dave Berg and the Usual Gang of Idiots were still there. I read the magazine with a mixture of pissing-myself-laughing joy and growing outrage as they took the mickey out of things I held dear. Sergio Aragones's "marginals" were always my favourite. My grandfather continued to buy me the magazine until he died seven years ago. I haven't looked at MAD since. 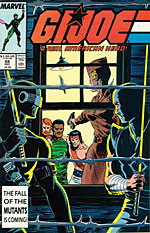 While everyone else, it seems, was into giant transforming robots, I was into their Hasbro/Marvel stable mate, GI JOE. I'm pretty sure it was due to Snake Eyes. I couldn't have cared less about all the military goings-on, but the ninjas were cool. I holidayed one winter on Rottnest Island, a small island about 30 kilometres off the mainland, populated by tiny wallabies that Dutch explorers thought were rats. The island then, obviously, was a rat's nest. But that was also the holiday where I was crooker that I've ever been, feverish and bedridden the entire time, with only my entire collection of GI JOE comics for company, the bed quite literally covered in them. Snake Eyes' origin was the first "secret origin" I remember reading, which made for a trippy read for an already hallucinating youngster: Snake Eyes being tortured by Dr Venom's Brainwave Scanner, and then slowing down his breathing, ninja-style, so everyone thought he was dead, fighting a big Eskimo named Kwinn? Snake Eyes was cool.

Like STAR WARS, I only have one GI JOE comic left, issue #66, after trading the rest away during an unfortunate detour cause by the inevitable high school infatuation with X-MEN. But #66 is 22 pages of Ninja Goodness, as Snake Eyes, Storm Shadow, Jinx and the ninjas break into a gulag to rescue some other badly named Joes. The issue is pretty dark: people being brutalized by prison guards, dead bodies as hunting trophies, and sweet, sweet ninja revenge. Also, Larry Hama did his research: the Kuji-No-In "finger knitting symbols that represent the aspects of the intuitive mind", which Storm Shadow teaches Billy, are actually real, and years later I realized the cool tattoos the ninjas had also related to the I Ching.

Familiar story: when I started high school, a friend shoved a copy of a comic into my hands. The cover was tattered already, a sign that it had been well-thumbed, and it featured a mannish-looking woman with a mohawk about to stab a guy with a knife. Off to the side was another guy with what looked like pointy ears and three claws sticking out of each hand. When I opened the comic, the guy with the claws was on the first page, kneeling on the road, all anguish and sharp teeth.

As an introduction to the X-Men (who weren't yet synonymous with overexposure), and especially as an introduction to Wolverine, it was a good issue: the team is fractured, Storm has no powers, and Wolverine, driven crazy with amnesia, looks set to kill innocent people, only to deliver a soppy moral at the end by stopping Storm doing the same.

But it worked for me, and I asked if my friend had any more X-Men comics. Just one more, #225, which was smack-bang in the middle of the 'Fall of the Mutants' storyline, and made no sense - but the pretty Marc Silvestri art, and Wolverine leading the team and getting shot up, only to be rescued by Longshot (complete with blonde mullet, which was the style at the time), and Colossus being all artistic and atomizing a phone booth because his big metal fingers couldn't work the tiny buttons, also worked for me.

I'd forgotten I was so enamored by that first issue that I nicked it off my mate. I found it a few years ago while going through a box of old comics, coverless and age-brittle. Oops.

Every now and then someone decides to revive the long dormant 'Australian Comic Industry' (and it's not always Eddie Campbell). There have been several attempts at this, and I can remember at least four of them, the last few involving people who have moved on to greater success within the wider American industry.

You have to understand, when it comes to comics down here, no one ever seems to have the inclination to create something new: we don't have the history like Jewish New York, and we certainly don't have the tenacity to pursue the cheap weekly newsprint nihilism of 2000AD. As people love to point out, we're descended from criminals, and in keeping with that tradition, we steal from others. Most often the American model. There have been some abominable superhero and cyberpunk comics polluting the newsagents of Australia. Badly drawn, badly written things. Sure, you might have read BRIGADE, but I've read ZERO ASSASSIN.

Sometimes, of course, someone comes along to buck the trend: Trudy Cooper and Danny Murphy made a sweet little comic called PLATNIUM GRIT. It was the perfect antidote to X-MEN. But more importantly it was an indie Australian comic that didn't suck! PG has a very Aussie sense of humour, it's quirky and occasionally sexy, it takes the piss out of everything from HIGHLANDER to dirty backpackers, cosmic sci-fi and politics, and it's earned itself a cult following. Best of all, what started off as a light-hearted, occasionally touching, frequently laugh-out-loud funny comic, slowly turned into something dark. Very, very dark. When the book went on hiatus in 1998 after 10 issues, we were left hanging in a bad, scary way. Thankfully, Cooper and Murphy have recently started continuing PLATNIUM GRIT online and in trades, which makes me happy.

I first came across Paul Pope in an issue of Wizard years ago, in the two pages they gave to indie comics. I had to fight the lead singer of a crappy local band for the only issue of THB #4 in the back issue box, a moment of pure nerd histrionics, and decided I would try and track down everything else this Pope guy had done. Which wasn't easy, as THB was like hen's teeth, and this was before his DC work. But, there in a display of discounted books at the front of the store was BUZZ BUZZ COMICS MAGAZINE #1, Pope's first try with tabloid-sized comics. One of those priceless finds. I felt like someone out of an Iain Sinclair book.

THB remains one of my favourite comics (despite missing the first three issues). While Pope's work for DC/Vertigo has matured, and is brilliant, THB plots the evolution of his talent. You can see his influences at work. Indeed, the main idea is very manga: young girl on the run with giant robot bodyguard. But Pope's art, the strange cosmopolitan, alien world he's created, and the politics and philosophies that surround everything, make it wholly his. A collection would be nice, though. One day, right, Paul?

My favourite Pope story, however, is found in the pages of BUZZ BUZZ COMICS MAGAZINE #1, between the appreciation of Hugo Pratt and three-way interview between Pope, Jeff Smith and Steve Bissette: a strange fragment of a story called 'Smoke Navigator'. 40 pages of remembrance and melancholy, as a young man returns home after the suicide of his untouchable girlfriend. It struck a chord with me, and remains, in my mind, the most mysterious, beautiful thing Pope has ever created. I'm sure he must've read Roland Barthes' A LOVER'S DISCOURSE. He later used the basic story as one of the threads in 100%, which was still bittersweet, but not as heartbreaking. I'm a sucker for anything Pope does, but it's his more realistic work that I savor.

I reviewed CAGES for Ninth Art, and I stand by what I wrote. Every year there's a new book that challenges the perception of what comics can really be but for me, CAGES is the benchmark. I'll freely admit that, yeah, I bought it because McKean was that guy who did the art for Neil Gaiman, and I was a Gaiman completist, but CAGES has stayed with me for the long haul. I mean, I could carry on about the scope and magnitude and blah blah blah, but really, when you pull a book off the shelf just to have quick look at it and then realize you've lost hours just pouring over the pages, well, I think that says something. I love this book.