It's a story about creation, and as creations go, it's a real work of art. Ninth Art unlocks master illustrator Dave McKean's weighty magnum opus and enters the CAGES.
11 April 2003 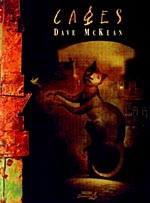 I have about a thousand words to use up in this review, but, really, I only need twelve.

CAGES is quite possibly the finest example of what comics can achieve.

And now, of course, I have to try and back this statement up. Which is hard. The problem is that CAGES is difficult to describe. It's an artefact, quite literally a thing made by art. A love story. It's about creativity and what drives us. It's a philosophical debate about the divine.

Ok, forget that. How about this: Flip open to any page (actually, flip is the wrong word: heave it open to any page), and look at, study McKean's art to see why this, in this reviewer's opinion, is one of the best comics ever (although, technically, it is called a 'comic novel' on the cover, which is as apt a term as any). It's not the best-written comic, but just look at it. I challenge anyone not to find something awe-inspiring within this book.

CAGES begins with four creation stories, under the apt prologue heading of 'Scaffolding'. These stories are familiar: the first man and woman, a flood more reminiscent of the tale of Wisakedjak than of Noah. The printed word dominates these pages, a flowery and long-winded prose that had me wondering if McKean was taking the piss or not. But stick with it, as these pages act as a buttress for the rest of the book.

On the surface, CAGES appears to be the story of Leo Sabarsky, a blocked artist who has moved into the mountainous Meru House to find a space to paint and regain his confidence. While Leo's story could be considered the traditional main story, as this book holds many stories (and stories within stories), it is as the book progresses that we discover that CAGES is about the act of, and our relationship to, creation.

And creation in both the building and divine tenses. McKean tells us this much from the start: it doesn't matter how the story goes, the end result is the same: something new is born, and anyone can do it. It's no coincidence that all of the characters make things, be it art, plants, words, music or food.

As we follow Leo through Meru House, we meet the other inhabitants, characters who wouldn't be out of place in a novel by any number of imitators of MÃ¡rquez, but luckily McKean manages to make his characters living, breathing humans, each with their own foibles. For the most part, you grow to care about them. They each have their own story, forming a little microcosm within the house, which makes sense as, in Tibetan Buddhism, Meru is a mountain that sits at the centre of the universe, linking the physical with the divine. In CAGES, Meru House acts as the same focus. 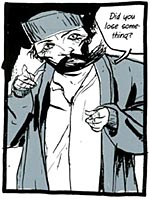 Everything, the characters and their situations, revolves around the house, and they all have a part to play in the central story. There is the poet-musician, Angel, whose talent, and perhaps understanding of music, is so great he can make stones sing; Karen, a botanist whose apartment is, quite literally, a forest, and her suit wearing god and his cat; The mute curator of the art gallery upstairs who speaks with cards, mixing them up and producing light Burroughs-esque phrases like, "Oh sheep I've lost all my sobbing colours"; The scientist, who dissects inanimate objects to remove their souls, but becomes squeamish at the thought to doing it to an actual living creature; Mrs Featherskill, who cooks dinner for her husband every night, even though he hasn't come home for five years, and the parrot that likes to tell her this.

Most importantly there is Jonathan Rush, the reclusive Salman Rushdie-like author, and his wife, who are imprisoned in their own apartment, and the agents in black who come and remove anything that gives Jonathan comfort. Why? Well, that would be telling, but McKean gives us a clue in the book's title. And then there is the strange black cat that scares off dogs, and used to be a man, and ties everything together.

McKean has obviously taken his cues from Gaiman, and the themes CAGES tackles also seem familiar. CAGES remains light and humorous throughout, even with such heavy subject matter, and McKean has a fairly good ear for English regional dialects. The mannerisms of the old landlady will be familiar to any of us who grew up watching old BBC comedies, and coupled with McKean's expressionistic art, her conversations with Leo are some of the most natural sounding dialogue I've read in a long time.

Of course, it's for the art that most people will come to CAGES. A lengthy illustrated narrative from the mind of McKean is too good an opportunity to refuse. Again, any heave through the book shows the wide variety of techniques McKean makes use of, a long way from his days with just a handheld camera and an Apple Mac. On some pages scratchy, black and white, pen and ink characters look through windows into worlds of blurry photography. Black and white explodes into colour for a few panels and pages, before returning to monochrome.

McKean's dominant style in CAGES has come a long way from the days of his earlier VIOLENT CASES, and CAGES is also, of course, a vehicle for McKean to experiment with the medium, seeing how far he can push it - and push it he does. Although somewhat of a clichÃ©, the phrase 'visual feast' is justified. So ignore the size, and the price tag, and just go and buy the damn thing. It's worth it.