When an angel abandons his wings in a dumpster, it provides one young boy with an opportunity to see his world from a different perspective. Ninth Art takes flight with Farel Dalrymple's exceptional POP GUN WAR.
10 October 2003 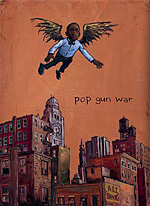 Ever since I read RAPTURE, David Sosnowski's highly underrated, not to mention only, novel, I've had this fascination with winged people. Not angels as such, just people with big stonking wings growing out of their backs. I don't know why. Something about the imagery it provokes, the freedom it offers. Being able to throw off the restraints of everyday life - including gravity - and just fly away...

This is what drew me to Farel Dalrymple's surreal POP GUN WAR: the imagery of a boy with a pair of wings strapped to his back with what looked like bandages. I wanted to know what his story was.

His name is Sinclair. One day, a tattooed angel crashes into an apartment building. One of the first people to see him is Sinclair, who looks up at him with awe in his eyes. The angel moves silently down the street where he pays a man to cut off his wings with a chainsaw. Avoiding the brutality and blood of a similar scene in SANDMAN, Dalrymple places his focuses on Sinclair, shyly watching as feathers fall amid the whine of the chainsaw. The wings are dumped into a garbage can, and the angel walks off. Sinclair grabs the wings, runs home with them and sticks them to his back.

Sinclair lives in The City, a cross between New York and Neverland, seen through a lens of literature and pop culture. There are strange things in the city, such as Koole, the angry monk, Percy the floating fish, and Sinclair's sister, Emily, lead singer of the rock band The Emilies. But the strangeness is tempered with normality, as with Sinclair's friends, acting as children do, friends one minute, enemies the next; and Rachel, who is probably the most realistically normal character in the book, acting as a mother figure, guardian and advisor to many of the characters. And watching all this is Sinclair, who just walks through the city, wings on his back, remembering a dream he had of dancing with his mother. 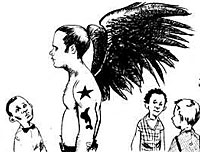 It's not until Sinclair comes to the aid of Addison, the local friendly homeless man that his world shifts just that little bit more. Sinclair realises the wings let him fly. This at first allows Sinclair an illusion of escape, but he is still a kid, and his lonely life and need for love and affection from his sister, busy with her band, often drags him back down to earth.

It's the characters, and how they interact - a blend of subtle humanity and surrealism - that drive the narrative of POP GUN WAR. While Sinclair is the central character, his wings carry us into the stories of the other characters. It's hard to nail down exactly what sort of story POP GUN WAR is, but Dalrymple addresses this exact point, as well as stating one of his main themes, just after Sinclair takes off into the sky. He crashes into a house whose owner literarily labels everything.

"Everything gets a label," the man says.

"Because people don't always know what things are." 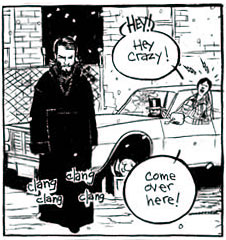 This rings true for the entire book. Things have dual meanings, just as people have more than one side. The Rich Kid, one of the truly scary characters Dalrymple creates, is Addison's eternal tormentor, not so much a villain as a someone who just wants to spread ill will, whispering coercive things to people. It's because of his involvement that Sinclair first flies, yet in another scene, he's seen sharing a joke with Sunshine Montana, a top hat wearing dwarf. It plays on the everyday differences in people and the basic humanity that links us. Emily sums this up during an interview:

"Isn't everybody different? A lot of my songs are about that, living in this city... with all of the weirdness around us."

POP GUN WAR has been likened to the "magic realism" of Gabriel Garcia Marquez and the films of David Lynch. Dalrymple isn't being weird for the sake of being weird. The characters are strange, but they have their place and are integral to the microcosm of POP GUN WAR. There's a reason for every action, every character. Why else would Roger, the angel who started the ball rolling, stick around, quietly watching the stories unfold?

Dalrymple's detailed black and white art perfectly depicts the weirdness but with an expressiveness and down to earth humanity that could have been lost by some other artists. He's also brilliant at showing the alienation many of the characters face. Sinclair's expressions especially speak volumes with no words exchanged. Dalrymple's city is equally excellently depicted. Outside, the city streets are close to deserted. It's a big city, modelled on Dalrymple's beloved New York, but it's the anti-New York; hardly any people on the streets and very few adults at all. It's the interior places of the city that are populated. The club where The Emilies play is always crowded and busy. Koole's den is dark and close. But outside, the darkness is lifted and open spaces allow the characters freedom to play and the reader to explore their relationships.

For Sinclair, his wings let him fly above all this, removing himself from the city, finding solace in his alienation. These are the most effective parts of the story. Dalrymple lets us experience these moments in beautifully still splash pages; Sinclair ascending over different parts of the city; the urban mundane seen from a different perspective; a tiny bit of magic.