Is there anything more disturbing and strange than children's entertainment? Not when it's placed in the hands of Gaiman and McKean. Ninth Art catches a puppet show that might hit rather close to home.
06 February 2004 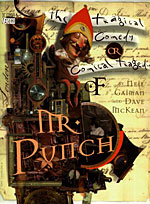 "The path of memory is neither straight nor safe, and we travel down it at our own risk," the narrator tell us a few pages in to MR PUNCH. "It is easier to take short journeys into the past, remembering in miniature, constructing tiny puppet plays in our heads. That's the way to do it."

MR PUNCH (or, to give it its full title, THE TRAGICAL COMEDY OR COMICAL TRAGEDY OF MR PUNCH: A ROMANCE) is a distillation of some of Neil Gaiman's favourite subjects: memory and childhood, family and betrayal.

The unseen, unnamed narrator begins the story when he was seven, fishing with his grandfather, where he finds a Punch and Judy tent standing alone on the grey pre-dawn beach. He watches an impromptu performance, drawn into the strange world of Mr Punch, his wife Judy, and their baby. He's the only audience, and Mr Punch knows this. After fetching the baby from the cellar, where it's eating coal, Judy kisses Punch, and leaves the baby in his care. Mr Punch holds the baby tenderly, looking at it with his horribly bug-eyes. Then as it begins to cry "a terrified, high-pitched whine", he throws the baby from the stage. It's a slow, brutal moment, and as the puppet lays on the sand bleeding, the boy runs away.

A year later, the boy is sent away to stay with his grandparents while his parents await the birth of their third child. His grandfather, once a successful man, has been left running a faux-seaside arcade, complete with old slot machines, mirror maze, fortune teller and mermaid. It is here that the boy meets Mr Swatchell, a Punch and Judy professor, and the murderous Mr Punch re-enters the boy's world, as the safe, strange world of his grandparents, witnessed through the haze of memory and a child's eyes, starts to disintegrate. Slowly, the life of his family starts to mirror that of Mr Punch. 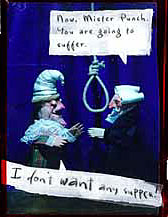 The incident with the lonely tent on the beach clues us in to the strange nature of memory. We know from Gaiman's other work that he deals in fantasy, but like his very first comics work, VIOLENT CASES (also with Dave McKean), MR PUNCH is grounded in reality, while at the same time creating a sense of the phantasmagorical.

Actually, this is almost a companion piece of VIOLENT CASES. We can believe that the puppets are there on the beach moving by themselves for a reason, but later we are forced to question the reliability of memory. Gaiman's use of the subtitle "A Romance", (possibly inspired by a novel by Gaiman's favourite author, GK Chesterton; THE MAN WHO WAS THURSDAY: A NIGHTMARE) is very telling. Apart from the irony that there appears to be no love between the familial characters, any interaction is conducted with a matter-of-fact stiffness. The OED offers two apt definitions of romance: "an atmosphere or tendency characterised by a sense of remoteness from or idealisation of everyday life"; and, "exaggeration or picturesque falsehood".

The idea of spending your childhood at an amusement arcade is something many kids would kill for; there's the promise of a hell of a lot of fun. But through Dave McKean's beautifully textured oils and collage, in a palette of rich, deep, dark tones, the arcade is more a house of secrets. This isn't fun for the narrator. Most of the time he doesn't understand what is going on.

Already on it's last legs, structurally and financially, the arcade provides a shadowy backdrop: the murky green of the mermaids tank, the deep blue velvet of the Punch and Judy stage, the red stripes of Swatchell's tent, and even the boring bricks of the streets. Indeed, MR PUNCH is set in a time apart from ours. Gaiman establishes this at the beginning with a certain humour; "the jogger would not appear for another for another decade: indeed my grandmother had pointed out to me my first hippie, whom she referred to as a beatnik, only the week before". Though the story is set only a generation ago, McKean invokes a surreal, often alien world. 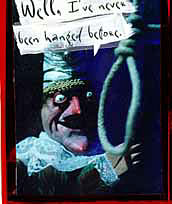 Of course, once again McKean's art elevates the visuals above the basic flat 2D of most comics, most impressively his use of photographic elements, adding depth and a sense of realism. It more than compliments Gaiman's writing, demonstrating yet again why these two are one of the best creative teams in comics. McKean's work here is still some of the best of his career - sharp, inventive and captivating. The whole design of the book is something to behold, right down the twisting fonts, showing why he is the arguably the best when it comes to doing what he does, as well as the most prone to 'homage'.

Having the Punch and Judy puppets as the only "real" elements (apart from backgrounds and props) is a masterstroke. Mr Punch himself is a terrifying figure, a puppet, all pointy angles and staring eyes. Even his speech, larger than the other fonts, stands out against smears of white as he laughs and taunts. "That's the way to do it!" The characters are, for the most part, painted, except in the case of reflections, in photographs and half-recalled memories.

When the narrator is seen in the present day, it is in shadow (another form of puppetry), a silhouette through gauze, and mostly at funerals or weddings, the beginning and the ends of families. Most tantalisingly is the back cover of the book, where a small boy lies sleeping, helping the phantasmagorical atmosphere along. This combination of words and pictures create such an engrossing world that we are sucked right in, sometimes uncomfortably as we witness the exploits of the clearly mad Mr Punch and the parallels in life.

Gaiman has said that MR PUNCH is the work he is most proud of, which, looking at his body of work, is saying something. It's a dark and unsettling look at how we perceive that strange and exciting time known as childhood long after we've grown up.

And that's the way to do it.