The first images from next year's Fantastic Four movie have been released, and Jessica Alba's Sue Storm is causing a particular stir - especially if you're John Byrne. Ben Wooller weighs in.
27 September 2004

It's happening again! The first promotional pictures of the FANTASTIC FOUR movie have been released, and everyone is screaming foul.

The same thing happened with X-MEN. It was, "Oooh, black leather: they're ripping off THE MATRIX!" SPIDER-MAN faired better, as the costume was perfect, but Gobby looked like a reject from MIGHTY MORPHING POWER RANGERS. In X-MEN 2, Nightcrawler's feet weren't right, and he had funny patterns on his face like Boone out of NIGHTBREED - oh well, at least he's got a split in his pants for the tail to poke out, and look, rosary beads! CATWOMAN... well, I think that one's just better left alone. The only thing people didn't complain about, as far as I can tell, was Doc Ock and HELLBOY.

It's all to do with context, of course. Still pictures aren't the same as watching a movie. There are things to take into account, like movement, lighting, and more often than not these days, CGI. (Did you know, that wasn't really Halle Berry's stomach in CATWOMAN? They CGI'd it so as to hide the stunt harness...) 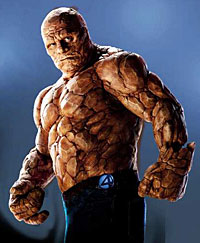 I don't really know the FANTASTIC FOUR all that well, though I remember wondering where the Human Torch was in the old cartoon, in which he'd been replaced by a less fiery robot named HERBIE (because Torch was being considered for a movie, not, as urban legend suggests, because the makers were scared kids would set themselves on fire). I also remember assuming that Mr Fantastic and Invisible Woman were middle aged (despite her originally being called Invisible Girl), if only because of Reed's greying temples and Sue's strange Jack Kirby hair.

Certainly they always came across as parental figures; Reed's the dad, Sue's the mum, with Johnny as the little boy and Ben as the grumpy old uncle with a heart of gold. ULTIMATE FANTASTIC FOUR has changed this family dynamic, and the movie seems to be veering closer to UFF territory by keeping the characters young.

Ioan Gruffudd's hair (and head) is suitably kid-genius boofy for Reed Richards, and I don't care that Johnny Storm actor Chris Evan's hair isn't blonde; Hugh Jackman isn't 5' 3", but he's still right for the part of Wolverine. The initial shots of Michael Chiklis as The Thing certainly has him looking appropriately tortured, in a Stan Lee way, but it's been hypothesised that the image we've seen is just one of the movie's transitional Thing forms.

Either way, the costumes look cool, as far as I'm concerned, fitting in perfectly alongside the X-MEN's black one-pieces as unifying uniforms. Nothing looks out of place, and right now that's as good as the fans can hope for.

Not everyone agrees that the moviemakers have got the FF's look right. Case in point, former FANTASTIC FOUR artist John Byrne had this to say about the first official picture of the fourth member of the cast, Jessica Alba as the Invisible Woman:

"Personal prejudice: Hispanic and Latino women with blond hair look like hookers to me, no matter how clean or 'cute' they are. Somehow those skin tones that look so good with dark, dark hair just don't work for me with lighter shades.

Now, I'm not looking to engage in a round of ritualistic Byrne-bashing; I've no strong views on the man's art or his career, having only seen his work on UNCANNY X-MEN (though I will advise people to stay well clear of his forum and avoid clicking the above link, unless you want to be catapulted back to some more 'innocent' time when comics were for boys, women knew their place, freedom of speech was a bad thing, and there were no ULTIMATE titles). 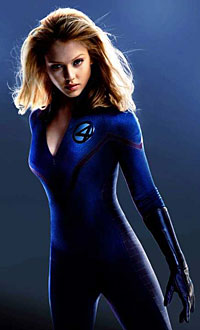 Yet I have to say, this is appalling and utterly unprofessional coming from the mouth of a respected comic creator like John Byrne. For all that he's entitled to his point of view, the remark comes across as arrogantly racist and sexist. If it weren't bad enough to suggest that women with different skin colour can look "like hookers" when they dye their hair, Byrne then says they look that way, "no matter how clean and 'cute' they are". Clean? It's almost enough to leave me speechless.

Byrne has said in past interviews that he has a "Victorian" way of looking at the world. That is to say, he has the sexual priggishness and complacent narrow-mindedness associated with that period. Evidently the fight for female emancipation might as well never have happened so far as it makes any difference to Byrne's worldview.

Whatever his justification, his views are inexcusably insulting, and he does himself no favours when he adds that anyone who says we shouldn't pass judgement on the decision to cast a black actress as Alicia Masters is engaged in "the usual PC bullshit". Keep digging that hole, John.

Byrne and Knowles seem to want a more motherly Invisible Woman (paging Dr Freud). Thankfully, I doubt the movie execs give a rat's arse about them - or comic fans, for that matter. Movies are a completely different animal to comics, and there are different dynamics at play. (Comics can sometimes be faithful to the source material, of course, but then again, there are people complaining that SIN CITY is going to be too faithful, so you can't please everybody.) If you're running a movie studio, you want to sell as many tickets to a film as possible, and that means focusing on pleasing the movie audience, not the fanboys.

It's times like this that I think I preferred the days when comic creators were seen and not heard.