With Tom Strong, Alan Moore has created the archetypal adventurer. Part homage, part pastiche - but is there anything beneath the pulp?
01 February 2002 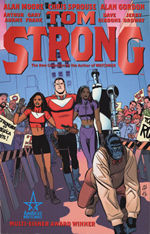 Picture Michael Jordan standing in rapt concentration, a basketball gently suspended in front of his face by his lean fingers. See him shoot that ball, with all of the form, grace and expertise one would expect of someone many would call the greatest basketball player of all time. See the pebble-skinned orange ball gently arc through the air and fall cleanly through the mathematical center of an equally orange hoop. Now, pull back the camera from its close-up, and see that Michael Jordan has just scored a basket with a mini-basketball at the local arcade, winning a multicolored stuffed bear.

This effect, of seeing an absolute master of a form use those expert talents for what amounts to trivial ends, is similar to the effect of reading Alan Moore's TOM STRONG.

This is not to say that there is nothing of value here. This is Alan Moore, and as would be expected, there is intelligence here. Wit abounds, the stories are well constructed and strong, and yet all of this talent and invention, in the end, adds up to not much. At the end of the day, it must be admitted, Moore is slumming here.

TOM STRONG is a pulpy, good-hearted homage to the comic book forbears of those first superheroes, Superman and Batman, with Doc Savage probably the prime model among them.

Moore is clearly writing with tongue firmly implanted in cheek; the first of the seven issues collected here tells the origin story of Tom Strong, the world's greatest "science hero", as Moore has dubbed him. And the format in which it's told is a comic book; the story is being read by young Timmy Turbo, newest member of the "Strongmen of America", the Mickey Mouse/FOOM-esque fan club of Tom Strong admirers. 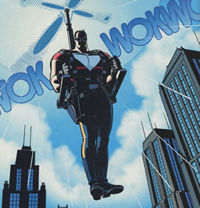 Within that first Timmy Turbo-guided issue, we learn that Strong was raised on the island of Attabar Teru by a genius father and loving mother; that he was raised under extreme gravitational pressure to give him great strength and constitution; that after his parents' death, he left to make a name for himself in the outside world, before returning to marry Dhalua, one of the natives; that he had a child with Dhalua; that he performed brain experiments on a gorilla to give it enhanced intelligence; and that he took his family and his father's pneumatic butler-robot (Pneuman, natch) to start a new life in Millennium City.

All of this is fun, and Moore of course puts it all together seamlessly and with wit. The comic-within-a-comic angle makes it clear that this whole enterprise is a throwback, a lark. Yet it never adds up to much, and that layer of distance and irony is never more than just that: a simple layer. There is no greater resonance or point being made here.

Which is fine, of course - if Moore wants to spend his time amusing himself with a trifle like this, who are we to stop him? And the old-fashioned, pulpy adventures he has written up for his "science-hero" are fun - of particular interest is the first proper story, as told in issue two, which involves "The Modular Man", an apparently old foe of Tom's.

The Modular Man was originally a human scientist with the forethought to make himself immortal by replicating his consciousness as, essentially, a computer virus. After his death he would be forever reconstituted, thereby achieving immortality. That Moore wit can be seen here in the Modular Man's ability to reconstitute himself after an apparent "death" by leaving plans on the internet to be stumbled upon and followed by whomever might stumble upon him - in this case, two geeky kids standing in for the average fanboy.

The story in the third issue, an Aztec-flavoured piece, is less well realised, and feels a bit too similar to the previous issue in its climax. In the third, a longer arc encompassing four issues, those old pulp villain standbys, Nazis, make their inevitable appearance. Each of the issues in this arc also features a short "Tale of Tom Strong" flashback tying into the main story, featuring a guest artist. 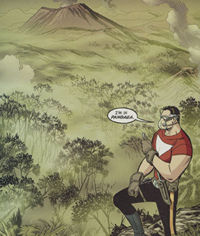 Chris Sprouse provides the regular art with inks by Alan Gordon, and, much like the series itself, it does a fine job of capturing that old comic feel. Strong is broad-shouldered, broad-jawed and possessed of a never-wavering confident stare.

In keeping with the flavour of nostalgia, Sprouse's storytelling is very traditional - lots of square, regular panels and clean lines - traditional comic book art. And yet he does get some opportunities to show off. Of particular note is the aforementioned Modular Man. Sprouse does an excellent job of portraying the sea of millions of toaster-sized, self-replicating machines that make the villain up. In his character designs too, he's done fine work; Tom Strong, in all of his broadness, looks familiar, as if he really is a forgotten hero of yesteryear.

All of the guest artists featured in the last story arc also produce very traditional "old-school" pieces, although Art Adams is unable to disguise his trademark style completely.

In the end, Tom Strong does come recommended. But, if Michael Jordan were shooting hoops at the local arcade, I'd probably recommend seeing him as well. In the end it's hard not to recommend the work of a master, wherever he's choosing to expend those talents.

That doesn't mean, however, that as I read these seven issues I wasn't wishing for a little more. And it's not as if Moore is incapable of producing more, even within these traditionally styled tales. Both TOP TEN and THE LEAGUE OF EXTRAORDINARY GENTLEMEN, two of the other comics from Moore's America's Best Comics line, are very specifically stylised as well. And yet both of those series manage to accomplish more than TOM STRONG, with a greater weight and a greater sense of purpose.

So, while TOM STRONG may be a fun read, and a fine homage to those pulpy heroes of old, much like potato chips, it leaves you feeling hungry once you're finished. And if there's one thing an Alan Moore comic should never do, its leave you hungry.