It's a little bit CrossGen, a little bit Conan Doyle; but is Mark Waid's elegantly illustrated detective tale too compromised to truly succeed? The answer is elementary, my dear reader...
04 October 2002 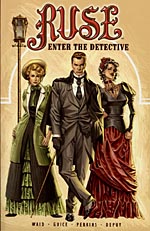 Mark Waid has a reputation in the industry - a reputation that, judging by all reports, is entirely justified - for his encyclopaedic and daunting knowledge of comic books, and in particular the spandex crime-fighting corner of this little world. It's therefore no surprise that Waid's reputation as a writer has come primarily from superhero books, with perhaps his most notable works being the alternate future of the DC Universe in KINGDOM COME and his well-received runs on CAPTAIN AMERICA and THE FLASH.

RUSE, then, represents an anomaly in his career - an anomaly that his recent departure from the book, and his arrival on THE FANTASTIC FOUR, would seem to signal as ending - as it is, for the most part, a straightforward detective comic.

That said, of course, RUSE is set in the CrossGen universe, which, while not a superhero universe in the stricter sense of the term, does feature numerous super-powered characters. Indeed, of the three main characters in RUSE, two do have some kind of extraordinary ability (something to do with the ability to stop time). And yet Waid isn't really cheating; in its tone, plot, characterisation and dialogue this is firmly and firstly a Victorian-era-style detective story, very much in the Sherlock Holmes tradition. 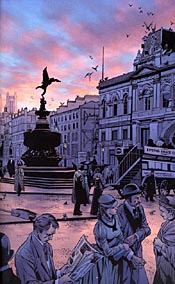 Waid's titular detective, Simon Archard, is, in fact, defined by a very deliberate exaggeration of the qualities that Holmes is most famous for. If Holmes was dry and unemotional, Archard is arid and soulless - we get hints in these first six issues that Archard's partner, Emma Bishop, has been sent (by whom is not yet made clear) specifically to force Simon to find emotion.

As for Holmes' storied deductive skills, Archard's talents in that area are pitched at an almost ludicrous height - in the opening page we see Archard solve a mystery nearly instantly. (I can't decide if Waid's tongue-in-cheek ploy of not actually explaining how Archard solves this particular mystery is clever or cheap).

It is as a detective series, then, that RUSE must be judged. And on that level it isn't entirely satisfying. We are given many examples of Archard's deductive brilliance, but none of them offer the frisson of discovery that they are clearly intended to have. In an early scene, Emma is forced to blow her cover and indulge in the use of her time-freezing powers - an act that she makes clear to us is meant to be avoided at all costs - because she and Simon find themselves in the hull of a fiery ship, with no way of escape.

When she is forced to restore time, without having secured their escape, Simon's "brilliant" solution of following the rats comes off as rather uninspired, if not downright unrealistic and simplistic. (What are the odds that the hole the rats have found to escape through is going to be big enough for Simon and Emma to use?)

All of Simon's feats of "brilliance" have, to varying degrees, this kind of disappointment attached to them, and in a book built upon the premise of the brilliant detective, that's somewhat fatal. 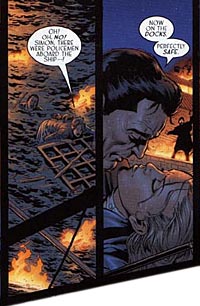 Where Waid does deliver is in his arch Victorian dialogue. While it is perhaps unfortunate that RUSE appears within the same few years as Alan Moore's similarly and more skilfully delivered THE LEAGUE OF EXTRAORDINARY GENTLEMEN, Waid's dialogue is entertaining and humorous, and it aids his characterisation well.

Waid is clearly having fun writing these characters, and it makes them a lot of fun to read. Simon and Emma both come across in the space of these six issues as decidedly well realised people, and the quirks of speech the setting and style allow for are a key factor in establishing their individuality.

Another positive note can be found in Guice's art, which is clean and straightforward. He fills the environments that Waid has created with admirable but light detail. His faces are the most accomplished facet of his pencils; he makes good use of the subtleties in expression in order to artfully take on board some of the burden of the storytelling.

Guice makes heavy use of the seemingly in-vogue long, two-page-length horizontal structure, requiring the reader to read across the top of a two-page spread and then continue back to the bottom of the same two pages. While many may not feel the same disorientation I did in having to read across a page and back again, the panel order can at times be confusing and hard to follow.

RUSE has received some very positive press, and it's certainly an enjoyable read. However, I found that I still couldn't forgive it its rather glaring flaws, namely the underwhelming nature of much of Simon's genius, and the somewhat incongruous inclusion of time-freezing superpowers. The latter feels particularly forced and unnecessary; one can easily imagine it to be a CrossGen imposed plot line, as it doesn't feel at all organic to Waid's overall vision.

Still, what is presented within these first six issues is clearly shown as just the start of a larger story that will be more fully addressed later in the series - and this is one series that has apparently earned itself a strong following in spite of its shortcomings.