Kurt Busiek's ASTRO CITY is a striking work of civic planning - a universe of characters created afresh, but made to feel retro and familiar. Ninth Art hopped on the commuter shuttle to revisit the old metropolis.
15 March 2002 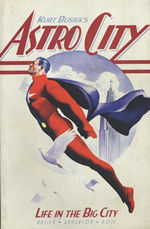 KURT BUSIEK'S ASTRO CITY is one in a woeful string of 90s comics that met with great critical approval on their arrival, but later fell to death or near-death at the hand of erratic, or worse, publishing.

In Busiek's case, the apparent culprit for derailing any degree of regularity for ASTRO CITY was a nasty sinus infection. In the letter pages of the comic, he explained to faithful readers that the particular type of writing ASTRO CITY called for was near impossible for him to undertake in a poor state of health, unlike his more traditional superhero work for Marvel. Those same faithful readers may be excused for wondering if the presumably higher pay Marvel was able to offer for such high-profile gigs as THE AVENGERS and THE DEFENDERS was also a factor.

In any case, although Busiek insists that ASTRO CITY will return some day (and indeed, hope springs eternal), the series has for all practical purposes been dead this last year or so. And, after rereading the first ASTRO CITY collection, LIFE IN THE BIG CITY, I consider that to be all the more a shame. For within the pages of his flagship series, Busiek was able to create a familiar and cozy world, a valentine to superhero fans looking for something a little old fashioned, while at the same time a little different, in a superhero comic. 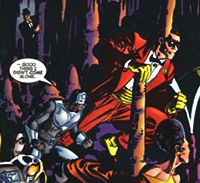 But Busiek's was one of the first, and it had a particular and very specific sensibility that served it well. Within these first six issues - actually the entirety of volume one, the limited series that led to the ongoing volume two - Busiek builds for us a grand old world filled with countless superheroes and supervillians echoing just about every archetype a fanboy could dream up. It's no accident that Busiek named the mountain overlooking the titular city "Mount Kirby"; there's a decidedly retro feel to these proceedings, a feel that nonetheless manages to come across as more than just homage.

As Busiek explains in his introductory essay, ASTRO CITY was conceived not to explain, "what it would be like if superheroes existed in our world," but "what it would feel like if we could wander through theirs." The raison d'Ãªtre for the series, then, is to explore this very impulse; to imagine what life might be like for both everyday people and the superheroes themselves in a superhero universe. And in these stories, Busiek does just that - sometimes to great effect, sometimes to more limited effect, but always to one degree or another satisfying. Each of these six self-contained stories provides us with a glimpse into life in Astro City.

We witness a small-time crook's evolving response, from euphoria to terror, at accidentally discovering the secret identity of local street-level superhero Jack-in-the-Box; a young woman struggles to come to terms with her life in Shadow Hill, an old-world neighborhood of Astro City populated by werewolves and vampires; and a date turns into an ideological debate for Astro City's Superman and Wonder Woman echoes, Samaritan and Winged Victory. In each of the book's stories, Busiek's goal is expertly achieved; the particulars of what it would be like to live in one of these super-universes is distinctly evoked.

But perhaps most impressive among the six stories is the first, in which it is revealed that Samaritan, in the few hours of sleep he gets a night between rescues, dreams of nothing but the luxury of flying, and what it would be like to have the time to enjoy it. It's a touching and melancholy piece, the kind of things superhero stories almost never manage to be, despite their clear potential to do just that. 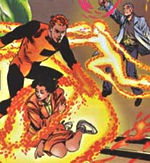 Brent E Anderson provides the art for these stories, with covers by Alex Ross. In the supplementary material included in this volume, Busiek makes it clear what an enormous job Anderson and Ross had in front of them. They had to create looks and designs for an entire world's worth of heroes and villains, and give those designs not the freshly minted veneer of a new idea, but an almost faux-antique finish. They had to give the readers the feel that this world and these characters were familiar to them - but they just hadn't met them yet.

What's more impressive is that Anderson and Ross have succeeded - the character designs and the feel of the city itself are both familiar, yet new. Samaritan's distinctive cape, for example, crossing in front of his chest and tying at his waist like a toga, is both a fresh take on the obligatory superhero cape and yet very traditional in appearance.

The Fantastic Four, the clear inspiration for Busiek's First Family, never had a cigar-chomping, balding grandfather figure wielding an enormous high-tech gun, or a super-powered child tagging along on adventures in full costume, but somehow Anderson convinces you with his design for the family that they should have.

All in all, this is an exceptionally designed book; in the sheer number of new characters created (most of which get all of a panel's appearance, and yet still make very specific and evocative impacts) and in the specificity of both those characters and the city they inhabit.

ASTRO CITY: LIFE IN THE BIG CITY comes recommended, even if it will prime you for a series that has all but vanished. Still, three more collections are currently available, ASTRO CITY: CONFESSIONS, ASTRO CITY: FAMILY ALBUM and ASTRO CITY: TARNISHED ANGEL, and all are worth reading. Only two or three issues remain to be collected, so it's a safe bet that, until the series returns anyway, these three collections will be it.

LIFE IN THE BIG CITY comes with a nice compendium of early sketches and character designs by Ross and Anderson, annotated by Busiek, as well as all of Ross' covers, with early sketches for each, and an excellent introduction by Busiek.