Ninth Art revisits the end of the universe; Alex Ross and Mark Waid's epic mid-90s miniseries that aimed to provide a capstone to the history of DC's superhero world.
19 April 2002 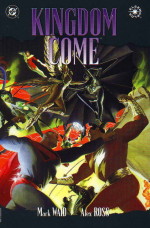 It's surely an overstatement that assumes too much and makes ridiculously broad assumptions, but let me say anyway that perhaps no genre of writing is so plot-dependent as the superhero comic.

That is to say, it could be argued that people come to a traditional superhero comic for story, for action, for narrative drive. Put another way (and, yes, we're now bordering on the self indulgent), readers don't usually come to a superhero comic for in-depth character study, or stream-of-consciousness writing, or elaborations on grand themes or any of the myriad other things readers do go to other forms of writing for.

I belabor all this because I find it odd, given this general statement, that the superhero comic's primary mode of expression - the serial - is one that, on a large scale, produces such unsatisfying stories.

How so? The ongoing superhero comic never ends. For a form so driven by plot, it's odd that, on the larger scale, superhero stories never get to that most necessary of narrative places, the ending. One could look at "the Superman story," for example, as a long, never-ending story made up of an infinite string of smaller stories. This, in a roundabout way, brings us to KINGDOM COME.

Something of an "event" when it was first published, KINGDOM COME attempts to tell, after a fashion, not just the "last" Superman story, but the "last" Batman, Wonder Woman, Flash stories etc. - in a very real sense the last DC Universe story.

As such, Mark Waid, the writer, has crafted a bit of an epic here, with large-scale events dominating the action set against a backdrop of a very - and at times excessively - biblical sense of apocalyptic fury.

Ross and Waid's story, in brief, deals with the return of the DC Universe's major superheroes after an extended absence, during which a new generation of "hero" has arisen. These new, younger characters operate on a different moral code than the heroes of old, and it is a specific action, and the public's reaction to it, that forces Superman into exile. This new generation seems to fight simply for the sake of fighting itself, and, with a disregard for the public that eventually turns tragic, they force a self-exiled Superman's hand, causing his return.

This younger, violent generation notwithstanding, the main conflict is felt between two separate factions of returning heroes - one led by Batman and one by Superman, and the book gets downright philosophical at times in delineating their differing viewpoints on how best to deal with the upstart generation.

KINDOM COME, then, with its many characters, history-laden back-story and involved plot, is indeed very much an epic. And yet, there's no doubt that in many a reader's eye the book is remembered more for Alex Ross' fully painted art than anything else.

Newcomers to the comic scene may be forgiven for assuming that Ross is a cover/poster artist only, given that in the past five years or so he's produced almost nothing but. He seems to have pretty much given up on the kind of work KINGDOM COME entailed; his similarly themed trio of Marvel series (EARTH X, UNIVERSE X and PARADISE X) telling of an apocalyptic future Marvel Universe features his ideas, plotting and covers, but no regular art whatsoever. 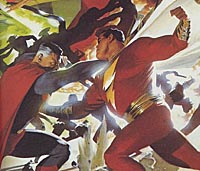 Standing as one of the few works of sequential art from Ross, then, KINGDOM COME is suitably impressive. Ross' style is best suited to the characters he focuses on here - heroes well into their middle age. Ross tends to paint his characters with a very real sense of weight and size to them; the trade-off is that his portrayal of a young, kinetic character such as Spider-Man can fall flat (look no further than his early breakthrough MARVELS for evidence of this).

But his portrayal of an elderly, almost thick-around-the-middle Superman feels just right. And, no matter what one may think of Ross' style, it's impossible not to be impressed with the sheer scale of things here. Panel after panel is filled with characters, many completely new and many younger versions of heroes of old. Ross' trademark, his vaunted photo-realistic style, is employed liberally, with nary a character or background dealt with in anything but full detail.

So - an epic story told with detailed, colorful, rich art. Promising. But, as a whole, does it live up to its promise? Does it hold together as a piece? Yes - albeit, not nearly as earth-shatteringly so as it seemed to on arrival for many. Still, this remains an engaging book, and as a stab at actually ending the DC story, it's an intriguing effort. There is a real feel here that years and years of DC history have been boiling up to this final, epic tale of morality and redemption.

But, at the very end, I'd say that Waid and Ross have copped out. The template for what KINGDOM COME is trying to be (that final DC story, that ending to the larger narrative) seems so clear, so obvious, that it comes as a disappointment when you realize that Waid and Ross are not exactly going to end the story. That is, they've left themselves an opening for more, so that the book doesn't in any real sense shut the door on the DC Universe, or even on the main characters within.

Whether it was a lack of faith in their storytelling abilities or the cynical need to keep the door open for the inevitable sequel (a few years later Waid wrote a far inferior sequel without Ross), Waid and Ross have failed to truly even attempt what I sense they could have done - write a satisfactory, and very final, ending for these characters. That caveat aside, KINGDOM come remains an accomplished read for those who like their superhero tales on the grander side.

The trade paperback edition comes with an introduction by Elliot S Maggin, character sketches and descriptions of he main players, a guide to the characters featured on each of the four covers, background material and sketches on one of the trade's two new scenes, and promotional artwork. Also included is an epilogue not included in the original miniseries, which sadly does nothing to address the issues described above.