The hype's died down, the competition's passed through town, but does one of the most successful movies ever made still stand up to scrutiny? John Connors has worn the tights; now he's experienced the dream.
27 May 2002 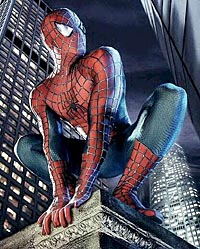 There's a very particular and fine balance that every film based on a superhero comic must strive to achieve. In simple terms, it's a balance that almost all films must find; the balance between comedy and drama.

But for a superhero film, this balance is especially crucial. A superhero film that takes itself too seriously, that strives too hard to be a serious drama, is doomed to failure, as the inherently non-serious aspects of the genre - the costumes and the supervillians and the powers - make too much gravity ridiculous and incongruous.

At the same time, if the material is not treated seriously enough, if it's treated with too much camp and winking at the audience, the audience won't care about the characters, and will be unable to connect with the movie on any kind of an emotional level.

As someone who was Spider-Man for Halloween on several occasions as a youngster, I can happily report that the current SPIDER-MAN film strikes this precarious balance perfectly. In fact, director Sam Raimi may just have made the greatest film yet to appear in that very specific niche of the superhero comic book movie. Given that Spider-Man was the last of the superhero world's 'holy trinity' of universally recognised characters (Superman and Batman are, of course, the others) to get the big budget feature film treatment, this success is all the more gratifying.

If Raimi made one masterstroke of a decision in his direction of this project, it was in his casting of Peter Parker. It's been heavily publicised that the powers-that-be at the studio needed a lot of convincing before they would approve Raimi's choice, Tobey Maguire, for the role, with Raimi even having to get a screen test of the actor in action before approval was eventually, and grudgingly, given. Maguire's performance in the finished film is testimony to Raimi's vision; the actor is, simply, perfect.

When Parker first appears on screen, he is late for school and chasing down his school bus. In the way Maguire runs - awkwardly, with arms flailing and feet slapping - and in the high-pitched anxious tone in his voice as he yells for the bus to wait, he makes it immediately clear that he understands the character of Peter Parker.

One can easily imagine the kind of macho, high cheek-boned young actor the studio would have liked to hire. And it's easy to imagine that actor putting on glasses and affecting a chin-down slouch to achieve Parker's outcast, nerdy look, only to revert back to his cover-boy ways once Peter becomes Spider-Man. And this, of course, would be completely wrong. Spider-Man is that awkward kid, and should never fully lose that awkward, withdrawn part of him. Raimi and Maguire understand this, and it is the centre that Maguire provides that, more than anything, makes the movie work so well.

In addition to his own instincts, Raimi had fortune - in the form of recent advances in computer graphics - to thank, for this movie simply could not have been made even five years ago. There are many shots of Spider-Man in action that are literally nothing but cartoons, pure computer animation.

In the web-slinging and even in some of his fighting, the filmmakers have used a completely computer-generated Spider-Man. Do the seams show? Of course, if you look close enough for them. Does it matter? Not at all. In fact, the slight unreality of the images of Spider-Man flipping and swinging through the air feels right. Spider-Man has always had an unnatural quality to his body language, and the effects capture that quality expertly.

There's a wonderful scene where Spider-Man dispatches some street thugs, by flipping and jumping atop them, that perfectly captures the acrobatic and inhuman way we've always imagined him fighting and moving. That a human couldn't actually do these things is precisely the point, and precisely why the effects work is so successful.

The accuracy of Raimi's casting instincts extends beyond just Maguire, and continues, without fail, to the rest of the main cast. Wilem Dafoe, as Norman Osborn/the Green Goblin, pegs that balance between serious and camp. You never catch him laughing at the role, standing outside of the character and mocking it, an itch that neither Gene Hackman as Lex Luthor nor Jack Nicholson as the Joker were able to avoid scratching in their big-budget supervillain roles. Dafoe takes the character seriously, and in the scenes in which he debates with his evil, goblin self, he never crosses the line into pantomime. 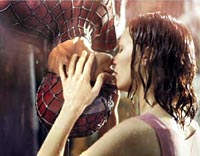 Kirsten Dunst, as Mary Jane Watson, doesn't have as challenging a role, and yet her performance is no less valuable. She grounds Mary Jane in a very real space, making Peter's attraction to her believable as something more than simple animal attraction; we understand his attraction to this person. Given that the love story between Peter and Mary Jane is given real prominence in David Koepp's script, this is even more crucial than you might expect.

In their supporting roles, Rosemary Harris (as Aunt May), JK Simmons (as J Jonah Jameson), James Franco (as Harry Osborn) and Cliff Robertson (as Uncle Ben) also do expert work, efficiently and very specifically etching out their characters in the relatively small time they're allotted.

Superhero movies generally either tell the character's origin story, or tell a story in which their hero is already established, merely sketching out the origin in flashback. When an origin story is as compelling as Spider-Man's, it would be lunacy to go the latter route, and SPIDER-MAN is very much an origin story.

That said, Koepp has done an admirable job of giving the origin its proper weight and importance, and not rushing through any of the big moments, while still allowing for an entertaining Spider-Man story. Juggling both Spider-Man and the Green Goblin's origins amidst the larger narrative of the central conflict is no easy task, and yet at no time are we aware of the heavy lifting being done by the screenplay. That said, the main story, the conflict between Spider-Man and the Green Goblin, is a little threadbare and skeletal, but in the end, it serves its purpose well enough.

In a very real sense, then, SPIDER-MAN is the sum of its parts, and an example of how nuts and bolts filmmaking can be very successful. SPIDER-MAN is not revolutionary, not even in the psuedo-revolutionary way in which many approached THE MATRIX, for example. But this is not a fault. What SPIDER-MAN is is a well-executed, wildly entertaining, and very gripping superhero comic book brought to life. And for that, I applaud it.