It's a very profane sort of morality tale; Ninth Art travels to the Lone Star State to hear the gospel according to Ennis and Dillon in this, the first chapter of Vertigo's modern classic.
21 June 2002 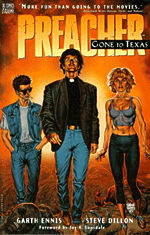 There are many ways in which writing is not like chemistry.

An example: In chemistry, it can be predetermined that certain chemical compounds, when mixed together, will react in a certain way. Scientists can predict what combinations of chemicals can do, and they know from experience that chemical A mixed with chemical B, for example, causes an explosion.

In writing, the potency of a formula can be much harder to guess at. For example, one would tend to assume comical violence, deep religious philosophising, alcoholic Irish vampires, gay-porn-loving serial killers, angels, demons, saints, streaming vulgarity and an old-fashioned and touching love story should not mix well together. And yet in Garth Ennis and Steve Dillon's PREACHER, somehow they do.

GONE TO TEXAS is the first of many PREACHER collections. In addition to the 66-issue series, all of which has been collected, there are also a couple of books of additional side stories and back-stories to the main narrative.

GONE TO TEXAS, then, is very much an introductory tale, a way of setting the table for the feast ahead, as it were. Its function is to introduce the principle characters and gently push them out into the main storyline. Chemistry again; this should make for a relatively staid and exposition-heavy book. In fact, it's quite the opposite.

Whatever one may think of Ennis' reliance on certain themes and conventions, one thing is very clear; he's a hell of a storyteller. From the very first pages, with neat and economical efficiency, he introduces his characters and sets up their situation.

Jesse Custer is a preacher in a small Texas town who has suddenly found himself possessed and empowered by the unholy offspring of an angel and a demon. Tulip, an old girlfriend of Jesse's, has been fleeing from a hit-gone-bad when she finds and rescues Jesse, in the aftermath of his very violent possession.

Then there's Cassidy, an Irish vampire who, after saving Tulip's hide, befriends Jesse. And there's the Saint of Killers, unleashed by heaven's keepers to kill Jesse and the unholy entity inside him before said entity can take control.

By the end of this first collection, Jesse has set off on his quest to track down an absentee God, a set-up that, while seemingly intentionally created for an endless series of on-the-road adventures (perfect for a serial comic) is in fact just the first chapter in a brilliantly constructed tale.

PREACHER is not a series for the faint of heart. In addition to the endless, extreme gore (which, to be fair, is for the most part somewhat realistic - a bullet probably doesn't just leave behind a small, red-rimmed hole after passing through a face), the series contains enough vulgarity to make HBO blush, and enough sexually explicit dialogue to, well, make HBO blush some more.

And yet buried deep, deep beneath the sordidness, blood and blasphemy is a surprisingly moral, even right wing core. Therein lies the real paradox of PREACHER - it is a very profane sort of morality tale. Jesse makes it his mission to find God, because his innate moral sense, albeit a moral sense heavily influenced by a spectral John Wayne that only he can see, is affronted by a God that could walk out on his people. 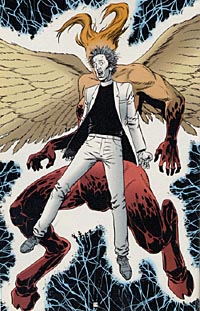 Jesse Custer is a man who, after calling a guy a "fuckin' abomination" for tearing out the throat of another man and drinking his blood, feels really bad about it, because he's "never stood in judgement like that on a fella before".

It's this boldfaced flaunting of form and substance that makes PREACHER such an invigorating read. And, while much of the credit goes to Ennis, not only for his storytelling skills, but also for his sharply drawn, inventive and comic sense of character, series artist Steve Dillon must also share in the hosannas.

Dillon's style is a sturdy one, with clean figures in the Dave Gibbons mode - nothing ornate or fancy - and yet in the acting he does for these characters, his style is ornate indeed. As almost every review of this series has rightly pointed out, PREACHER never makes use of thought balloons. That writer's crutch of being able to have a character tell us what he's feeling is taken away, pushing Dillon to make sure that we can see what these characters are feeling. Dillon's expressions are always specific and real - a rarity in comic art.

Dillon tends to do nothing fancy in his layouts either. Yet the little touches he includes - like effective and sparing use of white space, or the irregular black lines that outline his panels, or the way that those panels vary slightly in size, so that even a straightforward three-panel spread has a signature irregularity - give the book a very distinctive look and feel.

Dillon and Ennis have worked together for some years, and the strength of their creative rapport is probably the reason PREACHER is such a success. They continue to work together, and can currently be seen returning to their well-received work on PUNISHER at Marvel, though it lacks the gravitas of PREACHER.

Since PREACHER ended, Ennis seems to have been coasting a bit. His most recent projects have been entertaining, but have lacked that serious edge that always lay beneath PREACHER's surface. While there should be no call for a PREACHER sequel - the neat finality of the series is something that should never be tampered with - I do wish that Ennis and Dillon would tackle another equally ambitious project together. If they ever do, we can only hope that its first arc would form as perfect a whole as PREACHER: GONE TO TEXAS.