A small bespectacled English schoolboy is initiated into the world of magic. A familiar sounding set-up, but this is the Gaiman variation: Everything you ever wanted to know about sects, but were too afraid to ask.
02 August 2002 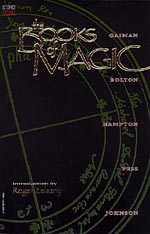 On the shelves of your local bookstore, be it of the comic or plain-old variety, you can find numerous trade paperbacks that collect the introductory arc of a series; I've reviewed a number of them here.

Comics being a traditionally plot (and often action)-driven medium, the majority of these opening series arcs jump directly into the story, guns blazing, and endeavour to find a way to get the exposition, the introductory material, in alongside the action. I remarked on this quality in my review of the first PREACHER trade several weeks ago.

The first collection of THE BOOKS OF MAGIC takes a different approach, because although an ongoing series followed, and while writer John Ney Reiber certainly drew heavily on the groundwork laid out by this four-issue series, Neil Gaiman's BOOKS OF MAGIC was conceived as a stand-alone work. It was never intended to be the first volume of a series, but rather to serve as a guide to the world of magic in the DC universe.

In that sense, then, the story told here is very much an introduction, and is also in many ways more of a travelogue than a story. But if it is dense, it's not with ham-fisted exposition, and if the devil is in the details - and there's an appropriate metaphor - it is in the details that THE BOOKS OF MAGIC truly shines.

The central figure in the story is Timothy Hunter, a seemingly very ordinary boy. As the story opens, four of DC's magical heavyweights - John Constantine, Mister E, The Stranger and Dr. Occult - are debating what to do with Tim, who apparently has the potential to be the world's most powerful user of magic.

The four men decide (with serious misgivings from Mister E, who would rather kill the boy and prevent any possibilities of his power one day being used for evil) to approach the boy and give him the choice of embracing the magical world or rejecting it. What follows is a series of four... well, as I said, 'travelogues', in which the four men (if they are indeed all men) take Tim on tours of this world and others to give him a feeling for the magical universe he has the power to enter. 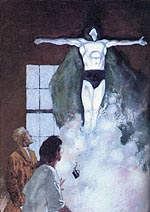 Again, none of this is particularly plot-intensive. And in many ways it serves as an introduction (or recap, depending on your point of view) to the DC Universe's stable of supernatural characters and settings. For this DC neophyte, the book was a bit overwhelming at times, with the sheer weight of characters and places being introduced occasionally too heavy to take in.

And yet, it should be remembered, none of the many, many characters introduced - save Timothy and his four guides - are really being introduced as characters as such; they are intended to be fleeting, and the way the reader may feel overwhelmed by their sheer numbers nicely approximates Timothy's own informational bombardment.

THE BOOKS OF MAGIC can get a little heavy at times, as the sheer weight of poetic and mystical description and prophecy the overview calls for seems to clog Gaiman's creative functions at times. But he does a superb job of depicting Constantine's characteristic parched-dry wit and calm swagger, infusing the chapter during which he takes Tim on a tour to meet many of Earth's magical folk with easily the lightest and clearest dialogue of the bunch.

Conversely, the introductory chapter, a tour through the creation of the world, with great magical milestones marking the way, gets too dense for its own good, slowing down almost to the point of stagnation at a few stops. The remainder of the book retains this tendency, and often what little forward motion there is gets a tad too slow, but Gaiman is deft enough to catch himself and get the action going again before the pace becomes oppressive.

In a gambit that usually makes for a horribly disjointed book, a different artist draws each chapter. And the results are astounding. THE BOOKS OF MAGIC is a truly beautiful work, seemingly endless in the variety of images it presents and the many different illustrative styles they are imagined in.

John Bolton draws the initial chapter in evocatively shadowy and grainy tones that almost look as if they have been etched in chalk. The style paradoxically works just as well for the opening "real-world" section as it does for the more esoteric magical timeline illustrated in the rest of the chapter. The journey through time that Timothy and the Stranger go on gives Bolton the chance to really showcase the diversity of his talents, as he depicts everything from the beginning of time to faux wood-etchings of witch trials. Even letterer Todd Klein gets his chance to show off here, with period-specific fonts utilised for one stretch.

The second chapter is painted by Scott Hampton in a style that is just shy of cartoony. With his ruddy faces, gleaming colours and bright pastel shades Hampton paints characters that in some way contains echoes of the characters of children's author Roald Dahl. Just as a hint of real menace and danger lurks behind the colourful and seemingly innocuous characters of Dahl's invention, so do Hampton's painted figures possess this duality of childlike friendliness and very adult menace. This stylistic trait is perhaps most fully displayed in a scene set at a party attended by dozens of DC Universe magical practitioners.

The third section is the most traditional, with Charles Vess providing fine, whispy line drawings of the sort that Tim Sale is making such effective use of today. Vess takes great advantage of the opportunity to illustrate Timothy and Dr. Occult's land of the fairy, filling the page with trolls and fairies and elves and all sorts of magical creature. The drawings have a very deliberate fairy-tale quality to them, and the fact that this quality is not offset by the darkness shading Hampton's work actually provides the threats inherent in some of the characters' dialogue with a striking contrast, one that lends them an even sharper edge. The richness of detail and the wealth of imagination on show makes it a sumptuous experience.

In the final chapter, Paul Johnson utilises an almost collage-like style, colourful and bright, with blocky, sharply cut figures. His depiction of this final journey into the future is more fragmented and choppy than any of the previous chapters, and this quality provides the final chapter with the unsettling quality that the story demands. The only downside to Johnson's style is that he ends up, by default, illustrating the coda, and the tone of that coda would perhaps be better served by the softer tone of Bolton or Vess.

While there is some inevitable adjusting of the eye required as each new chapter begins, in the end the art helps more than it hinders, assisting greatly in making each of Timothy's travels distinct and separate in the mind.

Though Gaiman's THE BOOKS OF MAGIC is an essential first step in discovering the ongoing series of the same name, its original stand-alone status means that it is by no means essential for someone wanting to read this collection to feel obliged to go on to read the series itself (or its spin-offs and sequels). In fact, as a stand-alone piece, it serves as a compelling meditation on the fantasies of mysticism and magic.

At times THE BOOKS OF MAGIC may seem rather dense - even overwhelmingly so - but that's a quality that also rewards return visits. As Roger Zelazny comments in his introduction, the individual chapters "worked well for me in either direction, as well as in several odd shufflings of the deck". Looked at in any of the several ways that it begs to be looked at, this is a beautiful and enchanting book.