There tend to be two types of comic fans in the world. Those who love the work of Mike Mignola, and those who just haven't read it yet. Ninth Art checks out a devil of a collection - your perfect introduction to HELLBOY.
09 August 2002 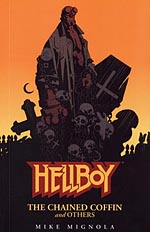 Sometimes, it's the simplest ideas that are the best. Take Mike Mignola's HELLBOY - an obvious and uncomplicated fusion of styles, transplanting a classic superhero archetype into the world of WEIRD TALES and old pulp serials. Essentially, Jack Kirby meets HP Lovecraft.

Arguably once the 'runt' of Dark Horse's creator-owned Legend imprint (next to Frank Miller's SIN CITY and John Byrne's THE NEXT MEN), Mignola's classic premise has since been proven to have staying power. July of this year saw the debut of HELLBOY's sixth solo series, and the concept has been successfully translated into novels, a role-playing game, and - soon - a Hollywood movie by CRONOS and BLADE II director Guillermo Del Toro.

Whoever said there was no money in doing creator-owned work?

Summoned up from Hell in the dying days of World War 2, the infant Hellboy was raised as a human (and as an American), his demonic nature tamed and repressed. Growing up to become the world's foremost paranormal investigator, Hellboy is also the top field agent with the US Government's Bureau for Paranormal Research and Defence - travelling the world and combating the otherworldly forces of darkness wherever they're found.

Although his story begins in the 1993 mini-series SEED OF DESTRUCTION (also available in collected form), that series is generally considered to be the weakest HELLBOY story - and as such probably isn't the best jumping on point for new readers.

THE CHAINED COFFIN AND OTHERS offers an alternative route into the series. A collection of various HELLBOY shorts and one-shots that have appeared over the years, most of the stories in THE CHAINED COFFIN serve as background to the main series - filling in the details of Hellboy's early career with the Bureau and introducing several ongoing characters. Most of Hellboy's supporting cast - including amphibious humanoid Abe Sapien, angsty pyrokinetic Liz Sherman and the stalwart Dr Kate Corrigan - put in an appearance here, and as such it serves as an excellent introduction to the character and his world. 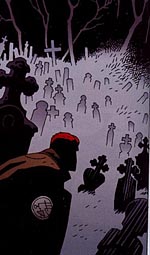 As P Craig Russell remarks in his introduction to the collection, however, there's another good reason to read THE CHAINED COFFIN - namely that it not only contains some of Mignola's finest writing on the series, but some of the most accomplished and assured genre pieces in the medium as well.

The stand out story in the collection is, to my mind, 'The Corpse'. The setting is rural Ireland in the 1950s, and Hellboy is summoned to a lonely farmhouse where a young couple suspect that their baby has been replaced with a changeling. After ascertaining that they are in fact correct, Hellboy sets off to meet with the fey folk and barter for the child's return.

An amalgamation of old Irish folk-tales, 'The Corpse' originally ran in two page instalments as part of Capital City's ADVANCE COMICS catalogue; as such something new and visually interesting had to occur every two pages, and the result is a busy, fun packed story that revels in its subject matter.

'The Corpse' is followed by two short-shorts - 'The Iron Shoes' - essentially just a fight between Hellboy and a rather odd Irish goblin with unusual footwear - and the previously unpublished 'The Baba-Yaga', which details Hellboy's first meeting with the old hag of Russian folklore - previously referred to in HELLBOY: WAKE THE DEVIL. These are really 'incidents' rather than stories, but Mignola still manages to pull off some fun stylistic tricks in them.

'A Christmas Underground' and 'The Chained Coffin' have a bit more meat to them, and again, both rely on an old folk-tale for their 'hooks'. These are actually the two least effective stories in the collection, however - probably because Mignola doesn't quite manage to reconcile the source material with the structure of the typical HELLBOY story. In the former case, the story comes across as a little exposition-light, and in the latter, a little exposition-heavy. 'The Chained Coffin', incidentally, serves as another piece in the puzzle of Hellboy's origin, and so it's perhaps more interesting in light of later stories.

The collection is rounded off by two longer pieces, 'The Wolves of Saint August' and 'Almost Colossus'. 'The Wolves of Saint August' originally ran in DARK HORSE PRESENTS, and was actually the first HELLBOY story after SEED OF DESTRCUTION (making it also Mignola's first attempt at scripting HELLBOY himself). It's a werewolf story, and basically revolves around a fight scene between Hellboy and a really big werewolf. Mignola tacks on another folk-tale, however - this time with satisfying results. This story also includes perhaps the most disturbing and effective imagery in the collection.

The final story - 'Almost Colossus' - was originally published as a two issue mini series. As such it's the longest piece, and also the one that leans most heavily on existing HELLBOY continuity; mainly because it serves as an epilogue to the HELLBOY epic WAKE THE DEVIL and introduces the recurring character of Roger the homunculus.

The short story has always been the ideal format for the weird tale, and Mignola ably lends weight to that hypothesis here - brilliantly crafting seven slices of concise and elegant high strangeness. Mignola writes with easy wit, demonstrating a clever yet dark sense of humour that's perfectly suited the subject matter (which, whilst often grim or disturbing, is always handled with a sense of pulpish playfulness). It's this sense of fun that Mignola manages to convey that drives the occasionally 'plotless' stories along none the worse for their lack of narrative weight.

Of course, it's impossible to separate Mignola's writing from his art. Despite wearing his influences on his sleeve (Kirby, Frazetta, Wrightson), Mignola has one of the most individual and easily recognisable art styles in comics. His clean, angular lines and masterful use of blacks and shadows is strikingly dynamic, and yet also wonderfully evocative in terms of atmosphere and mood.

More importantly, Mignola has a fantastic sense of visual awareness - evident in everything from his page design to his pacing. The result is a very smooth and assured read, in which the story and art feel wonderfully integrated and complimentary. Special mention also needs to be made of the colours provided by James Sinclair, Matt Hollingsworth and Dave Stewart, which do a magnificent job of accentuating Mignola's art.

Uncomplicated and accessible, yet also intelligent, witty and stylish, HELLBOY is undoubtedly a rare combination in modern mainstream comics. THE CHAINED COFFIN AND OTHERS is the perfect introduction to HELLBOY, so if you're not already reading the adventures of Mignola's hell-spawned hero, now would be an excellent time to start.