Leland Purvis, the hugely innovative creator of VOX, edged towards the mainstream with his tale of a renegade genetically engineered man running amok among the talking animals of the forest. But not that mainstream. Ninth Art tracks down PUBO.
19 September 2003 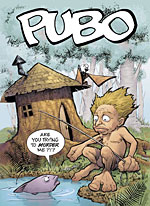 The other week my brother's wife gave birth to their first child; a beautiful baby girl weighing 8lbs 1oz, and answering (well, not quite yet, obviously) to the name of Sophie. As the proud uncle, I was on hand to ooh and ah over her, and as I cradled her tiny form in my arms, a thought suddenly occurred to me: in a few years time, I could well be buying her her first comic. More than that - it should be me who buys her her first comic.

This presented me with a problem; I know nothing of what kids enjoy reading these days, and in fact have always strongly suspected that the little horrors don't really enjoy reading much at all anymore. I know nothing about kids' comics - except that whenever comics enthusiasts gather to discuss them, they have a tendency to conclude that there aren't really all that many good ones out there anymore.

Clearly, this was not going to be a simple task, and rather a major operation requiring much careful thought, research and planning. Thank God I've still got years to prepare, I thought to myself, feeling rather oppressed by the sudden weight of this new, frightening responsibility.

Then all of a sudden I remembered Leland Purvis's PUBO.

And everything was all right again. 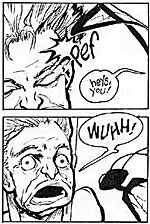 PUBO (Physically Unipolar Biogenic Organism) originally debuted in the pages of VOX - Purvis's highly regarded (and yet criminally under-ordered) one-man anthology comic featuring strips and essays, all by Purvis himself. The titular troll-like genetically engineered life-form (his body parts have been re-sized to reflect the sensitivity of his nerve endings) first appeared in issue #2, in a short strip that saw him engaged in a battle of wills and wits with a salmon that he was attempting to catch.

At the start of his first solo series however, Pubo is being transported via aircraft from Japan to a top-secret government laboratory in the US (this is effectively Pubo's 'origin' story). Guarding him are two particularly dim-witted men-in-black, who inadvertently give the strangely shaped little man the chance of escape. Having parachuted to (apparent) safety, Pubo finds himself lost in a nameless forest somewhere in the Pacific Northwest, populated by talking animals and a mysterious, blind mystic. Hunted by the MIBs and a giant, vengeful grizzly bear, Pubo attempts to survive and find a place for himself in this brave new world.

With PUBO Purvis is clearly targeting an 'all ages' audience - he's dropped the overt philosophising that characterised so much of his VOX material (and that first PUBO strip), and instead opts for a straightforward, almost threadbare plot where the focus is almost entirely on character and humour. Pubo himself is a brilliantly conceived invention - visually well designed, with an engaging, cantankerous personality that sees him annoy and offend just about everyone and everything he encounters. Purvis doesn't just confine his creative efforts to the title character either, and provides a diverse and sizeable supporting cast of forest creatures for Pubo to interact with, each with their own distinct speech patterns, mannerisms and personality. It's hugely endearing stuff, and the sort of thing I know I would have lapped up as a kid.

For me though, the real draw is the book's clever, well-observed humour; in particular Purvis's witty, often laugh-out-loud dialogue, which manages to be both intelligent and funny without becoming obscure or overly complex. And while the humour is clearly tailored for an all ages audience, Purvis admirably avoids condescension or the temptation to dumb down his material. It's particularly refreshing to read a book featuring a cast of talking animals that don't shy away from eating each other just because the author doesn't believe children can handle the realities of the natural world (and I say that as someone whose favourite characters were the fish).

At first glance, Purvis's loose, organic art looks simplistic and sketchy, but it is in fact deceptively crammed full of detail, brilliantly evoking the vast, unspoiled woodland and the wild creatures that live in it. Purvis is also particularly adept at portraying movement, and imbues the action sequences with a genuinely exhilarating, kinetic feel. The more of Purvis's work I see, the more I realise that there's a real depth and craft to it that extends far beyond his initially pleasing, cartoony lines.

PUBO is Purvis's first mainstream work, and it's an impressive, assured debut. He's succeeded in creating a wonderfully engaging character and a richly detailed world full of potential that should appeal to readers of all shapes, sizes and colours; assuming, of course, that it's marketed properly. I understand that sales on the original series weren't good; hopefully it'll find the audience it deserves in collected form.

I mean, if my niece enjoys it as much as I hope she will, it'd be really great to have a sequel to show her as well...