War. What is it good for? Well, it's good for a laugh, judging by David Rees's low-fi clip-art commentary on America's war on terror. Ninth Art is in the house for what may be the most seen webcomic in the world.
29 August 2003

In medical terminology, shock is defined as a potentially life-threatening condition brought on by a sudden drop in blood flow through the body. It's often the result of the loss of a large amount of blood, or circulatory problems associated with the functioning of the heart. Symptoms include low blood pressure, hyperventilation, a weak, rapid pulse, coldness, and loss of colour in the skin, as well a number of well-documented psychological effects: typically, someone suffering from shock will experience a greatly increased sense of anxiety and confusion, often accompanied by a feeling of mental numbness.

To the layman though, the term has a broader sense; when faced with especially traumatic events we often experience symptoms similar (albeit milder and not necessarily life-threatening) to those we experience when in medical shock: numbness; anxiety; confusion; and so we talk about 'being in shock' when a loved one dies, or when we receive unexpected bad news.

And this is exactly how America felt when two passenger planes flew into the World Trade Centre Towers in New York on September 11th, 2001: America was in shock.

About a month after September 11th, the first GET YOUR WAR ON cartoon strips started appearing on David Rees's personal web site. Utilising copyright-free clip-art and modifying it with a cheap graphics program, Rees expressed his grief and anger at what was happening to his country in the form of a rough-and-ready DIY web comic. He posted the strips to his website in blocks of eight, told a few friends, and then waited for the responses to trickle in.

Slowly, people began to take notice. And then they told their friends. 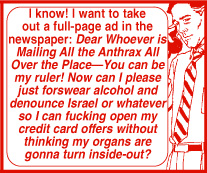 Since then, somewhere in the region of eight million people have visited his site, making GET YOUR WAR ON the first real comics phenomenon of the internet age. Two years on and Rees continues to post new material online, and the strips also appear every month in Rolling Stone.

The dead tree version, published by New York publisher Soft Skull Press, collects nearly the first full year of strips neatly into a slim, affordable, well-designed package, including a new introduction by Colson Whitehead, author of THE INTUITIONIST and JOHN HENRY DAYS. It's an extremely well put-together volume, and an altogether successful translation of online content to print. (Rees, incidentally, is donating all his royalties from the book to landmine relief efforts in Afghanistan.)

If you've read the online strips before, you'll know that GET YOUR WAR ON is pretty much a one trick pony: Rees's static panels feature antiseptic, 1970s style renderings of office workers talking on the phone, discussing current events in a cynical, expletive-laden dialogue.

"Oh Yeah! Operation: Enduring Freedom is in the house!"

"Oh Yeah! Operation: Enduring our Freedom is in the motherfucking house!"

"Yes! Operation: Enduring our Freedom to bomb the living fuck out of you is in the house!" 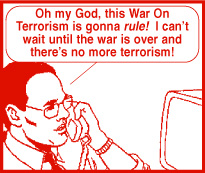 And so on. If this makes GET YOUR WAR ON sound crass or unsophisticated, then you'd be right - in part. You'd also be missing the point. Rees isn't trying to be clever, preachy or even particularly political; nor are his strips intended to impart great insights. Rather, they form a running commentary on post 9/11 America, and attempt to express a confused and anxious American's bewildered reaction to it.

At best, GET YOUR WAR ON could be described as an attempt to make sense out of a world gone slightly off its rails; not a telling political commentary, demolishing its targets with clinical, laser-like precision, but rather someone simply standing up and asking, "Look - just what the fuck is going on here?"

Rees's humour is simple but effective; often cynical and occasionally venomous, but tempered by the frequent inclusion of sudden, highly surreal moments that delight and perplex in equal measure. Rees grows into his work too - visibly becoming more and more adept with his toolset as one reads through the volume.

GET YOUR WAR ON reads like the diary of a man left in shock by the world-changing events that occurred on September 11th, 2001. As a political cartoon, it's funny, entertaining and refreshingly direct. However, it's also an important contemporary document; an emotional snapshot of the calamitous times we live in.

Not everyone is going to appreciate Rees's humour, or feel that it's appropriate. They don't have to. GET YOUR WAR ON is a very personal attempt by one man to understand the unfamiliar and deeply troubling world he one day quite suddenly found himself living in; something everyone affected by 9/11 has had to do in their own way.

But if none of this grabs you, then I should probably mention that there's a special guest appearance by Voltron about halfway through. That's got to be good for sales, right?