It's the CITIZEN KANE of comics - but does the sheer weight of expectation affect the appeal MAUS holds for new readers? Ninth Art's John Connors belatedly takes his seat to hear the Spiegelman family's survivor's tale.
06 September 2002 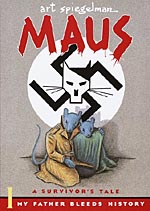 Every medium has its own set of clichÃ©d superlatives, works deemed so remarkable, so important, such pinnacles of a given form, that trying to write about them as someone coming to them new can seem a most quixotic and futile endeavor. CITIZEN KANE. Beethoven's Ninth Symphony. HAMLET. Michelangelo's David. THE WHITE ALBUM. To write about any of these in a less-than-glowing manner - to be even a smidgen unimpressed by any one - can see one branded as unsophisticated; an obvious troglodyte.

Is all of this verbiage an expansive way of cushioning the blow - am I piling up words like so many blankets underneath the precariously dangling sure-to-come viperous reaction to this, a negative review of one of comics' holy grails? Not exactly.

MAUS, surely the comic book equivalent of the titles listed above, is a strong work. I was quite moved by it. But in reading it I found myself, to one degree or another, undone by two perceptual difficulties. The first is one, I suspect, that can afflict anyone experiencing a work of art under mountains of expectations.

After all, as countless writers and publications have told me - even Wizard magazine! - MAUS is the absolute pinnacle of the comic book form, the best it has to offer. With such lofty expectations built-in (this is the best thing you will ever read), how can one not come away somewhat underwhelmed?

The second difficulty was actually a misapprehension - I did not realize to what a strong degree MAUS is a simple oral history; indeed, at least one mega-bookstore chain here in the US files it not with the graphic novels (where Will Eisner's work is filed, so this is no mere superhero ghetto section I'm describing) but in the history section. 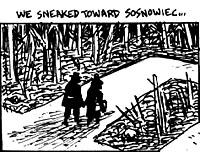 This is no thinly veiled historical novel, but instead a quite upfront telling of the author's father's holocaust story of survival. Names do not appear to be changed; this is in the very literal sense of the word, non-fiction. In fact, the only sop to any kind of a fictional device is Spiegelman's lauded use of traditional cartoon anthropomorphs for his real life characters, with Jews as mice, Nazis as cats, Frenchmen as frogs, and so on.

So, as I read the book, I was reading it through a kind of dual veil, constantly aware both of how impressed I should be, and of how it was not the fictional tale I had suspected. As a fictionalised tale, one can imagine MAUS would play out differently, and with a much more traditional story arc, than it does. But, as a transcription of actual events, it has the feel of real life, with a meandering, aimless quality that, while horribly true to the spirit of the story, wouldn't quite work in actual fiction. Spiegelman's real achievement, it seems to me, is not a fiction writer's one, but a historian's. Though it is, of course, no less impressive for that.

Embedded within the book is the story's actual framing device, the interviews Spiegelman conducted with his ageing father that he used as the basis of the book. Over the course of well over a year, Art Spiegelman's father, Vladek, tells his story. The story itself is not particularly stirring or remarkable when compared to other survivor's tales, but it's that very matter-of-fact, quality of the telling that makes it so horrific.

The events of the Holocaust, as portrayed in MAUS, are denied the kind of grandiose sentiment and drama that even so wonderful a document as Spielberg's SCHINDLER'S LIST falls prey to. Compounding this horrible sense of normalcy is Spiegelman's unflinching portrayal of both his father and himself. His father's irrationality, and the general irritability and nastiness that can come with age, are strikingly and honestly portrayed.

But so is Spiegelman's own sometimes blanching callousness, and his inability to connect either to the history his father lived through and to the man himself. The irony of the author of this noted Holocaust memoir being sometimes so unable to understand the real impact of that story is perhaps the book's most delicious layer. 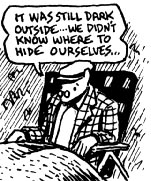 The other, more famous, layer is the aforementioned anthropomorphism. Spiegelman's use of cartoon-animal types does a very subtle thing - it allows for a very simplified, pared-down art style. Spiegelman is able to sketch out his characters in a way that human figures might not fully allow. The images have a rawness to them, an undetailed, almost information-only effect that keeps the story on the documentary level.

It's almost as if, realising that actual documentary-level authenticity would be almost impossible to portray in his linework, Spiegelman has opted for the other extreme. By avoiding the human face, Spiegelman avoids any of the cheap sentimentality that he could otherwise easily come by. His use of animals is an almost Brechtian technique; their clear artificiality forces us to connect to the story in a more clinical than emotional way. We're denied the paradoxically easy escape of emotional empathy, and thus are forced to truly think about the story.

That the story has - in the most literal sense of the word - a happy ending (Spiegelman's father does survive, after all) is a fact that can easily be missed, because it's very much beside the point. Spiegelman isn't going for a happy or a sad ending, but rather, just an ending. This is history, not fiction.

MAUS may not be the single greatest piece of comic literature ever written, but it is certainly an effecting and thought-provoking work, and an excellent example of the form.