As new issues of LEAVE IT TO CHANCE finally arrive in stores, Ninth Art invites you to take a chance on the first album format collection of James Robinson and Paul Smith's wonderful adventure yarn - for children of all ages.
20 December 2002 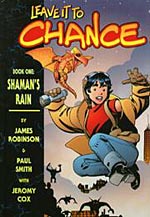 One thing fans, pros and retailers alike in the comics industry all seem to agree on is that there just aren't enough comic books for kids anymore.

This is a problem, the argument goes, because the majority of present day comic book readers formed their current 'habits' when they were kids. The new generation of brats just aren't getting that first fix of four colour excitement; they aren't falling in love with the medium, they won't be buying comics when they get older, and so in forty odd years' time, when the last living fanboy expels his final, fetid breath over his copy of AMAZING SPIDER MAN #528, the entire industry is going to go with him to the grave.

So we need more comic books for kids, and we need them now. Unfortunately, looking around the direct marketplace, it quickly becomes obvious that examples of this sort of thing are few and far between. At this point in the discussion, someone will invariably bring up LEAVE IT TO CHANCE. Apparently, kids would really like LEAVE IT TO CHANCE if they were to read it.

I wish I could endorse this recommendation, but in all honesty I have absolutely no idea what kids like to read these days. The generation gap for me is a great yawning chasm and the tastes and inclinations of today's youth are well out of sight, somewhere on the other side. If they're anything at all like I was at their age, then I suspect the last thing they want to read are comic books that are supposedly for kids, but that's just speculation on my part. I know next to nothing at all of these small, strange creatures.

What I do know however, is that I really like LEAVE IT TO CHANCE.

LEAVE IT TO CHANCE was one of the first titles to appear in Wildstorm's Homage imprint back in the mid-nineties (the others being ASTRO CITY and STRANGERS IN PARADISE). At the time, writer James Robinson was riding high on the critical and commercial success of his STARMAN revamp over at DC, a series noted for its adult themes and 'sub-Vertigo' take on the traditional superhero. Artist Paul Smith, meanwhile, was (and probably still is) best known for his seminal run on UNCANNY X-MEN nearly two decades ago. The two had collaborated a few years previously on the Elseworlds mini-series THE GOLDEN AGE - a noir-ish superhero mystery thriller that caused controversy on account of its downbeat, 'realistic' portrayal of many much-loved DC characters of yesteryear.

Neither of them seemed like obvious candidates to be working on a book aimed at kids.

Nevertheless, LEAVE IT TO CHANCE debuted in 1996 to great critical acclaim. Unfortunately, it was never a great commercial success, and in 1999, after just twelve issues, it went on indefinite hiatus. Robinson began to drift away from comics after kick-starting his career as a Hollywood scriptwriter, and as time went on it looked increasingly unlikely that the series would return and deal with the fallout from #12's emotionally charged, cliff-hanger ending.

The announcement by Image earlier this year that the series was to be reprinted in a series of European-style hardcover graphic albums, which would then be followed by all new material from Robinson and Smith, came as an extremely welcome surprise.

The first such album, SHAMAN'S RAIN, reprints the first four issues of the series, in which we are introduced to Chance Falconer - the fourteen year old daughter of Lucas Falconer, latest in a long family line of occult investigators pledged to protect the city of Devil's Echo against supernatural threats. Lucas Falconer's heroic exploits have made him a celebrity of sorts, and he lives with Chance on a fairy-tale country estate (with real fairies), where he brushes up on his mystical prowess and awaits the call to action. 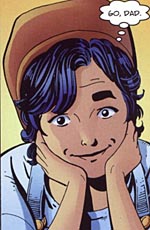 With fourteen being the traditional age for young Falconers to begin their training in the occult arts, Chance approaches her father and asks him to start schooling her in the family trade. When he refuses, citing the great danger involved (he wants her to grow up, get married and have a son he can train), Chance decides to 'prove' herself by investigating a seemingly minor case that crops up just as her father is called out of town on urgent business. Naturally, it turns out to be far more dangerous and important than anything Chance could ever have imagined.

LEAVE IT TO CHANCE harks back to an era when children's entertainment wasn't always quite so puerile and sanitised. As Robinson points out, it's more of an all-ages adventure story than a kid's comic - similar in tone to say, the INDIANA JONES movies. (My only real experience of Robinson's own model for Chance Falconer - NANCY DREW - comes from the hardly representative 70s TV series; however, I gather that she fulfils a similar cultural role in the US to THE FAMOUS FIVE and THE SECRET SEVEN here in the UK.)

Robinson's script is smart, snappy and fun, and while there's a few concessions towards the conventions of the genre, it's all handled in an intelligent, non-condescending fashion. The plot even lifts elements from CHINATOWN.

Paul Smith's art, meanwhile, is a revelation; playfully cartoonish, and incorporating a retro-feel that recalls everything from LITTLE ORPHAN ANNIE to LITTLE NEMO, and even old-style Archie comics. Especially in the new European album format, it's hard not to see a bit of HergÃ© in there as well.

Smith doesn't sacrifice his modern sensibilities, however, and his easy, fluid storytelling is in many ways the highlight of the book. Some of the monsters look genuinely frightening, and Devil's Echo is a brilliantly realised, richly evocative cityscape in the same vein as STARMAN's Opal City and Alec 'Firearm' Swan's version of Pasadena.

In LEAVE IT TO CHANCE, Robinson and Smith have created an engaging cast of characters and a memorable, magical setting for them to have adventures in. Furthermore, they've managed to do it with style. The fact that any kid with anything even approximating good taste is probably going to love this series is by the by - it's a great comic, and as we're all so fond of reminding people, comics aren't just for kids.