The spirit of the Blitz isn't the only spirit conjured in James Robinson and Paul Johnson's recently republished late 80s graphic novel. It's an historic tale from a very different period in comics history, but it still feels fresh today.
31 January 2003 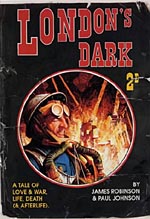 Before reading LONDON'S DARK (and make sure that you do, because after I've waffled on for a bit, I am going to be recommending it), take a moment to flip it over and read the copy on the back.

There, you'll find the usual sleeve quotes full of lavish praise and enthusiastic recommendation - except that here, it's not the usual round of comic industry pros making these pronouncements. Instead, the names attached to comments like "delightfully touching" and "evocative tale, compellingly told" include the likes of TV chat show host Jonathan Ross; maverick film director Alex Cox; ex-Monty Python Terry Jones; and acclaimed novelists such as Ramsey Campbell, Peter Lovesey and Michael Moorcock.

In fact, the only comics professional allowed to weigh in is the late, great Archie Goodwin (who after reading this work immediately offered writer James Robinson some of his first work in the American market).

Yes, LONDON'S DARK is a curious artefact from the days when comics received considerably more recognition and respect from the mainstream media. First published in 1989, it was the product of a joint venture between Titan books and the legendary ESCAPE, and was a commercial follow up of sorts to Neil Gaiman and Dave McKean's debut graphic novel, VIOLENT CASES.

Like that work, LONDON'S DARK was a radical departure from the norm: an original graphic novel (at a time when the format was in its infancy in the Anglophone market) by two unknown creators, characterised by both a willingness to experiment and to play fast and loose with genre. It was also a very deliberate attempt to break new ground artistically and commercially.

Simply put, they don't make them like this anymore.

Set in London in 1940, at the height of the Blitz, LONDON'S DARK begins with a murder. Greengrocer Harold Stevens is chased across a bombed out cityscape illuminated only by the fire from burning buildings. Cornered by his assailants, Stevens struggles in vain, trying one last time to reason with them only to have his face smashed in with a brick.

Jumping forward four months, we're introduced to the book's main protagonist, Jack Brookes. Jack is a nice guy, who, having been denied the chance to serve his country in the forces on account of a weak heart, has had to settle for becoming an Air Raid Warden. Every night he sees another street in ruins and pulls fresh bodies out of the rubble, but somehow, he always manages to maintain his innate sense of optimism and his faith in his fellow man.

It's only when he meets the medium Sophie Heath (having been asked to 'have a word with her' by his aunt - concerned with the effect she has on her good friend Mrs Stevens) that he suddenly realises how alienated and alone he feels. Embarking on a passionate affair with Sophie, Jack seems to be on the verge of finding genuine happiness. Unfortunately, dark forces are gathering at the edge of his world; determined that the secrets of the past should stay buried.

At once a romance, a crime thriller and a ghost story, LONDON'S DARK has a distinctly cinematic feel that recalls old wartime-era British thrillers by the likes of Hitchcock and Powell. Nostalgic but not cloyingly so, and sentimental without lapsing into melodrama, LONDON'S DARK has - in contrast to VIOLENT CASES - a quietly conventional plot. There's a genuine warmth and humanity to the very ordinary characters, and the grimy wartime London setting is wonderfully evoked.

As Robinson and Johnson's first real work in the medium (and in Johnson's case, his only long form one), it's also a rough, and extremely experimental effort. While Robinson's plot is simple enough to follow in itself, some of his narrative tricks aren't quite so easy to get a handle on, and there's a real sense of him learning what works and what doesn't as he goes along.

Beginning the book with an awkward, stilted-sounding third person narration, he switches half way through into the first person - allowing his characters to speak for him. At one point, in order to deliver a lengthy piece of exposition, he abruptly switches from sequential art to prose. At times it feels a little clumsy, and on occasion even confusing, although ultimately, the pros far outweigh the cons.

Johnson's stark black and white art, meanwhile, is revelatory; his elegantly designed pages drip atmosphere and menace. He employs such a variety of different techniques and methods that at times every turn of the page seems to reveal something new, innovative and daring.

Although a little uneven and laboured, LONDON'S DARK is nevertheless a fascinating work - overall, far from flawless but littered with nuggets of genius. It's a credit to Robinson and Johnson's talent that long after its initial publication, LONDON'S DARK still looks and feels new, different and forward-looking.

How often can you say that about a work that's well over a decade old?