Are you sitting comfortably? Then we'll begin. But don't expect a happy ever after for the heroes of your bedtime stories. Bill Willingham's high concept whodunnit for Vertigo is no fairy tale.
07 February 2003 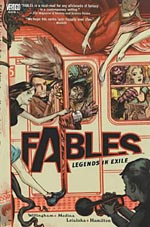 It's important to note up front that, while the buzz that's surrounded the title since its debut last year might imply otherwise, the high concept behind Bill Willingham's FABLES is not a new one. Aficionados of bad US sitcoms may well recall THE CHARMINGS, a very typical, very MUNSTERS- and BEWITCHED-inspired sitcom that lasted for a year or so before a mercy cancellation in 1988.

The premise of THE CHARMINGS was that a spell gone wrong by Snow White's wicked witch of a stepmother had cast Snow White, Prince Charming and their kids (can't have a sitcom without some kids, don't you know) into modern suburbia, and much fish-out-of-water hilarity did (not) ensue. So, the basic idea of fairy tale characters transplanted into a modern setting has been done at least once before.

It is undoubtedly a fun concept, but as is usually the case with high concept titles, FABLES will live and die on its execution. Happily, Bill Willingham manages quite nicely. His take on this variation of the endlessly recycling fish-out-of-water trope is to treat these fairy tale characters as real people, and not the simple caricatures we might remember them to be from our youths.

In effect, it's the opposite of the typical approach; instead of conflict resulting from innocent characters thrust into a not-so-innocent world, conflict here results from characters we remember as innocent and one-dimensional becoming less so.

To be sure, Willingham takes as his starting point those simple, flat personality types, but in translating the characters to present-day New York, he expands upon and deepens them. So Jack, of Beanstalk fame, becomes not just an open-hearted, simple-minded naÃ¯ve lad, but a young man intent on getting through life with as little effort as possible, sponging off others and applying his limited intellect to various ill-conceived get-rich schemes.

Beauty and the Beast are still together, but, as with all long-married couples, the bloom is off the rose. What we remember starting out as a pure, unchecked love has become more modern - the kind of love that's stronger some days than others. And as their love fluctuates, so does the Beast's curse - the more they bicker the more like a Beast he appears. In all of these familiar characters, we see echoes of their past stories, and much of the fun of the series comes from meeting old characters and seeing them through this new, more modern lens.

The other thing Willingham does to make this concept his own is play with the idea of a larger, extended back-stories of his characters. One way to go with the series could have been to simply place the characters in present-day New York as a given, but instead Willingham is building a deliberate world and history. The characters have fled to modern-day New York from the land of fables to escape from "The Adversary", a savage creature who has systematically taken over the fables' world. The full story, one assumes, will emerge as the series progresses.

Amidst all of this character and universe building is the plot of these first few issues, a plot that takes the form of an old-fashioned murder mystery. As the series opens, we learn that reckless hedonist and loose cannon Rose Red, sister of Snow White (who basically runs the fable community as mayor Cole's right-hand woman), has possibly been killed. Rose's live-in lover Jack informs the fables' head of security Bigby Wolf (formerly the Big Bad Wolf), that their apartment is a trashed, bloody, mess, but there's no body to be found. Bigby begins the investigation, with a shaken Snow White insisting on helping out. 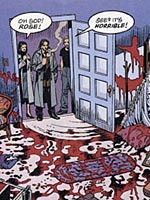 The mystery that unfolds plays fair, with real clues available to the alert reader. However, the denouement relies a little too heavily on the hoary device of the detective explicating the mystery at a party where everyone involved with the story is assembled. Willingham goes to great lengths to wink at his readers, with Bigby explaining that he'd always wanted to do a clichÃ© mystery reveal, but that doesn't really blunt the creakiness of the ending.

What makes FABLES such an engaging read isn't the mystery itself, but the characters. Willingham has done a fine job in avoiding neat heroes and villains; virtually all of the characters have fairly serious flaws mixed together with better impulses. We care for these characters precisely because of their reality; they have the subtle but unmistakable texture of real people, and we identify with them because of that.

Most surprising of all is the balance Willingham is able to give to his two protagonists, Snow White and Bigby. The dynamic between these two is perhaps the book's greatest strength, and the mini-resolution their relationship gets satisfies far more than the unraveling of the mystery.

Lan Medina's pencils are competent, if unfortunately not more than that. While I might have preferred to see a more dynamic take on these characters, with a more personal or idiosyncratic viewpoint, this is fairly standard comic book art, reminiscent of the solid, fundamentally sound and generic art that most Marvel books seemed to feature throughout the 80s. The covers by James Jean and Alex Maleev have an entirely different feel to them, effectively combining exaggeration and reality, and there is a sense of "what might have been" when one contemplates a series done entirely in that style.

Also included in this collection is a short story by Willingham that does a great deal towards fleshing out the back story of the fables. While some of the character details it reveals are intriguing, the prose is somewhat stilted and overwritten - Willingham is a fine comic book writer, but on the evidence of this piece, prose isn't where his strengths lie.