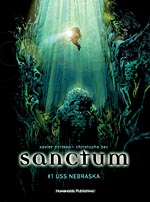 Cinematic. That's the word I want to use to describe SANCTUM. While that doesn't really say much of anything by itself, it's still the term that popped into my head most often when reading it. This, I kept thinking to myself, is a cinematic comic book.

Why? Well, there's Christopher Bec's lush, open art, for one thing; his exquisite detail and his grand, sweeping, undersea vistas. Then there's the oversized hardcover graphic album format common to Humanoids and other European publishers, which allows for a sense of scale and spectacle that you simply don't get in the standard 22 page 170 x 260mm format favoured by American comics.

And then there's Xavier Dorison's high-concept plot: an epic SF-action thriller that involves submarines, a world on the edge of war, ancient supernatural evils and really big, really impressive explosions. 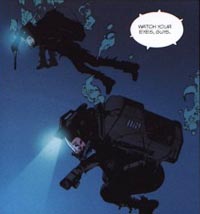 Berlin, 1945: Three hundred Russian troops have just given up their lives to capture a Nazi stronghold of little to no strategic importance. Demanding an explanation for the slaughter of his men, their commanding officer is led down into the building's vaults by the mysterious Colonel Orovich. The vaults are crammed with ancient Sumerian artefacts, looted from Mesopotamia by Hitler's occult archaeologists. The grizzled, battle-weary captain isn't impressed at all by any of this; he turns to confront the colonel, only for Orovich to gun him down in cold blood before he can speak.

Twelve years later, and Orovich is on a Soviet submarine somewhere in the Eastern Mediterranean, close to completing the clandestine mission he was assigned to in Berlin. The only problem is that the crew doesn't want to go on. The men are afraid and dying - of what and from what we aren't told. Orovich insists that they press on, at which point the sub's captain chooses to destroy his own vessel with a hand grenade rather than continue.

Flash forward to the year 2029, and the USS Nebraska - a Grayback II class nuclear attack submarine - is on a routine surveillance mission in the East Med amid mounting international tension between the US and Syria.

After nine days at sea, the Nebraska detects a faint distress beacon emanating from within an underwater cave system at the bottom of a deep-sea trench. Investigating further, the Nebraska discovers the remains of a Cold War-era Russian submarine, and the entrance to a long submerged prehistoric city. The Nebraska's captain decides to leave the business of investigating the valuable archaeological find to future civilian expeditions and continue on his mission. What he and his crew don't realise, however, is that there's something alive down there with them - something that doesn't want them to leave just yet... 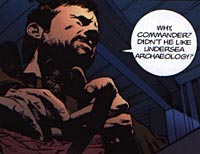 Bec's photo-realistic art, heavily reminiscent of action cinema like ALIENS and THE ABYSS, is perfectly suited to the style and scope of the story, brilliantly depicting the oppressive, claustrophobic environment of the Nebraska and the predicament in which it finds itself. His eye for detail and skilled draughtsmanship combine to keep the story moving at a brisk, snappy pace while still leaving plenty of opportunity for awe-inspiring double page spreads that beautifully illustrate the scale of writer Dorison's vision.

A relative newcomer to the comics industry, Dorison has previously written the medieval mystery thriller THE THIRD WILL (his first significant work, published in 1997) and the alternate-world fantasy PROPHET. Already having demonstrated a range that would put many Anglophone talents to shame, he also has both a Western and a contemporary crime/espionage thriller currently in the pipeline, as well as further science fiction work.

While he's undoubtedly a very highly-regarded talent in France, however, it's difficult to assess his strengths here; dialogue often tends to lose some of its sparkle in translation, and some of the exposition feels particularly clunky and forced.

Characterisation is kept to a minimum for most of the cast, and the main characters are all painted fairly straightforwardly too - often the crew are quite difficult to tell apart. That said, this is clearly an 'ideas' and 'spectacle' sort of a book, and on these terms it undoubtedly succeeds, with Dorison riffing superbly on HP Lovecraft, Stephen King, Michael Crichton, James Cameron and others.

SANCTUM is a brilliantly realised, wonderfully accomplished mainstream SF thriller of the kind you wouldn't normally expect to see outside of your local Multiplex cinema. In fact, don't be surprised if you do see it there one summer...