Some people get nostalgic for comics about toys, but people who grew up with DEADLINE are more likely to yearn for the violent fascists of their youth. Nick Brownlow discovers that the magic is still there.
09 May 2003 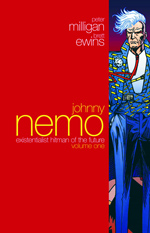 My God, what a brilliant fucking comic. Look, he's punching an orphan again! Ha Ha! What a complete bastard! Is this episode really called 'Cogito, Ergo, Buggered'? Why doesn't anyone make comics like this anymore? Why, Goddamnit, why?

I have to confess that reading Milligan and Ewins' s JOHNNY NEMO strips for the first time in ten years or so is a welcome stroll down memory lane for me; a self-indulgent return to my formative years as a comic-book reader.

We all agree that allowing in nostalgia is bad and that it's responsible for holding the industry back of course, and blah blah blah too, but while in the US nostalgia for the comics of yesteryear is generally associated with Kirby-esque super-heroics and a sense of innocent, child-like wonder, in the UK it usually means reading about some mad bloke with big boots kicking the living shit out of someone much smaller and physically weaker than him - and, of course, finding the whole thing incredibly funny.

Which is OK then, obviously.

Johnny Nemo has much in common with many of those old British characters, but he's just that little bit more extreme - a private investigator in New London in the 30th Century, he's Mike Danger by way of Jerry Cornelius and Judge Dredd; a larger than life comic book icon whose job it is to simply shoot, punch and gouge his way through Milligan's bizarre plots, smoking cigarettes and knocking back alcohol as he goes.

He first appeared in the mid-eighties in the pages of the anthology STRANGE DAYS, published in the US by Eclipse, which was followed by a short-lived solo series. Most readers, including myself, first encountered him in seminal UK fashion/music/comics magazine DEADLINE, which first appeared in 1988, and, as well as Nemo, introduced the world to the likes of Alan Martin and Jamie Hewlett's 'Tank Girl', Philip Bond's 'Wired World' and Nick Abadzis's 'Hugo Tate'.

The brainchild of NEMO artists Brett Ewins and Steve Dillon, DEADLINE began as an experimental hodgepodge of adult-oriented strips for which no outlet had previously existed, and went on to play a central role in the thriving late eighties/early nineties UK mature-readers comic book scene, paving the way for such imitators as BLAST, REVOLVER and STRIP.

DEADLINE eventually folded in 1994, after allegedly over-investing in the TANK GIRL franchise, which subsequently collapsed in the wake of the utterly appalling movie adaptation. As an early champion of creator's rights, however, Milligan and Ewins retained control over their character and the strips that had appeared in DEADLINE, which allowed Cyberosia - smarting from its failed attempt to secure the rights to republish DC's SKREEMER - to pick up and repackage another Milligan/Ewins/Dillon collaboration for a new generation.

Milligan taps into a non-too subtle vein of humour that's in your face and loud as hell; in the course of this slim volume, Nemo investigates the mystery of the exploding nuns, survives an attempt on his life by an assassin who fills his head with philosophy, and recovers the left testicle of Bing Crosby from a violent religious sect that has taken to worshipping it. He generally sorts all these things out by just killing everyone involved (and more often than not, quite a few people that aren't).

Oh, it's clever in an ironic way, of course; Nemo as a character is clearly a savvy amalgamation of a number of well-observed comic book archetypes: the indestructible action hero, the gumshoe private eye and, of course, the aforementioned big-booted fascists. But let's not pretend it's the underlying condemnation of violence that you're laughing at when he starts shooting innocent bystanders dead (women and children first) in order to help clear his head of 'philosophy'.

Co-creator Brett Ewins, whose mad, violent art was once a regular feature in 2000AD on strips such as 'Judge Dredd', 'Anderson Psi Division' and 'Bad Company', is on comfortable ground here. His busy, cartoonish style lends the proceedings an appropriately chaotic feel, and his sense of (black) humour is clearly very much in tune with Milligan's. Steve Dillon's pencils - always a welcome sight - turn up in the final strip - 'Lady Lucre' - and he's another natural fit for the character. Readers of PREACHER and THE PUNISHER don't need me to tell them that he's clearly a sick bastard too.

The package is rounded off by a new text story by Milligan, 'Time for Nemo', a sharp, satirical and typically cynical reminder of just how talented a guy Milligan is, which has me all nostalgic for the text pieces he used to write in early issues of DEADLINE now as well.

Yes, them were the days.

For anyone who caught the strips the first time round, this collection is a welcome reminder of why you started buying comics in the first place, and for anyone who missed them it's a hugely enjoyable glimpse into why British comic writers are so fucked in the head. Nostalgia yes, but the good kind. Now, if someone would just put WIRED WORLD and HUGO TATE back into print, my life would be complete. Sigh.