From demonic creatures attacking Japan to alien parasites attacking... well, Japan, everyone loves a good monster story. Except for those people running through the streets of Tokyo. Ninth Art goes on a rampage. Grargh.
14 July 2003

Monsters: They're brilliant aren't they? An integral and iconic part of the comic book landscape, monsters have been around for almost as long as superheroes, but have the distinct advantage of being much cooler.

Like superheroes, monsters have strange, supernatural powers and fantastic, outlandish appearances. In addition, though, they also go around smashing things and eating people, often shouting cool stuff like "smash puny humans!" or sometimes even just snorting or growling.

Long before Jack and Stan reinvented the superhero genre, Marvel's mainstays were titles like STRANGE TALES, JOURNEY INTO MYSTERY and TALES TO ASTONISH, in which magnificent alien/mutant monstrosities called brilliant things like 'Xom', 'Dragoom', 'Monstrom', 'Gorgilla' and 'Fin Fang Foom' terrorised a pre-superhero world of helpless, doomed humans. Even after people (as opposed to just lizards or apes) started getting irradiated by cosmic rays, they'd still occasionally sneak the odd monster, such as the Hulk or the Thing, into the proceedings.

Nor has the monster comic ever really gone away: In the '70s we had classic horror titles like TOMB OF DRACULA and WEREWOLF BY NIGHT; in the '80s Michael T Gilbert's MR MONSTER, a resurgent SWAMP THING and movie tie-ins like ALIENS and PREDATOR. These days, we have comics that feature everything from planet-sized alien gods to zombie foetuses; and oh look, that HULK chappie has his own movie now as well. Monsters are brilliant, and these are some of the best: 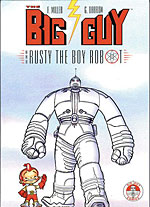 Frank Miller and Geoff Darrow's follow up to the frankly insane HARD BOILED was a Tezuka Osamu/giant robot/Japanese monster movie homage in a similarly lunatic vein. An A-bomb test in the Pacific goes badly wrong when an ancient, demonic horror is released and forms a grotesque body for itself out of the ensuing nuclear fallout - Godzilla crossed with Great Cthulhu, basically.

The atomic monstrosity proceeds to rampage through downtown Tokyo, with Japan's pint-sized defender - Rusty the boy robot - powerless to stop it. The Japanese call on the good old US of A for help, and the Pentagon selflessly dispatches codename: Big Guy - an all-American armoured avenger with a good line in cheap wisecracks - to assist.

Cue more monsters, super heroics and property destruction than you can shake a stick at, all on a massive, insanely detailed scale. Miller and Darrow's masterpiece of epic violence more than makes up for the fact that no one has ever managed to produce a half-decent GODZILLA comic. Buy it, read it, and then split your sides laughing that some lunatic has bought the TV rights and decided to turn it into a Saturday morning cartoon for kids.

Once upon a time, a dangerously unbalanced individual by the name of William Gaines decided that the well respected, middle-brow comics publisher he happened to own (Educational Comics - also known as EC) just wasn't paying the rent. The solution he came up with was to create a series of genre titles that would emphasise lurid, sensationalistic content over sober, well-balanced educational material - subsequently bringing in the lowest common denominator in droves.

Gaines' instincts proved to be entirely correct, and EC Comics expanded to include highly successful lines that specialised in crime, science fiction, war and, most famously of all, horror. The flagship book was TALES FROM THE CRYPT - an anthology title specialising in short but sick self-contained stories; a pot pourri of nightmares that ate into the minds of America's children and (according to a certain German psychiatrist) corrupted them beyond all redemption.

At the time it all proved to be too much for their parents, who subsequently had all EC's comics banned (with the exception of MAD), and introduced legislation that would effectively neuter American comics for the better part of the next three decades. The rest, as they say, is history.

Fifty years on though, and the EC horror comics line is rightfully considered a landmark in comics publishing, featuring artwork by industry greats such as Johnny Craig, Wally Wood, Jack Davis, Al Felstein and many others, as well as a succession of gloriously foul monsters including vampires, mummies, zombies, cannibals and even hook-handed serial killers.

This deluxe slipcased five book set is going to be out of most readers' price range, but those that take the plunge will find themselves owning a crucial piece of comic-book history, as well as some mighty fine monster comics to boot. 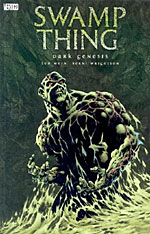 Although wholly eclipsed by the legendary Moore/Bissette/Totleben run on the same title a decade later, these early exploits of the titular muck man nevertheless feature a satisfyingly grotesque menagerie of monsters, largely thanks to the diseased mind of horror comics legend Bernie Wrightson.

Despite Len Wein's melodramatic dialogue and overblown prose, old Swampy still manages to cut a rather menacing root-laced figure, especially when pitted against such distasteful delights as Anton Arcane's synthetic Un-Men, the Patchwork Man and the Lovecraftian M'Nagalah - basically an enormous tentacled eyeball squatting at the bottom of a disused mine.

Heavily influenced by classic horror comics (including the aforementioned EC titles), and weird pulp fiction, the original SWAMP THING was a satisfying ride through a succession of campy, b-movie stock plots and good old-fashioned gothic horror clichÃ©s. Whilst the material in DARK GENESIS hasn't aged well, I can only assume it must have been like a breath of fresh (or, I suppose, rank) air to the monster-starved comic-book readership of early 1970s America. And frankly, if you like this sort of thing (as I do), then it's worth it just for the titles alone ('The Last of the Ravenwind Witches', 'The Monster on the Moors', 'The Lurker in Tunnel 13' etc).

Hitosi Iwaaki's gut-wrenching series PARASYTE is the story of a particularly nasty alien invasion (or is it?) that sees shape-shifting monsters called 'parasytes' enter the bodies of sleeping Japanese citizens, consume their heads from the inside and then 'replace' them. This allows the parasytes to assimilate themselves into human society and go about their daily business: namely, eating people.

Not all the attempted infestations are successful however, and the parasyte that attempts to attack difficult teenager Shin is trapped in the boy's left hand. After consuming and replacing the offending organ, 'Lefty' forges an uneasy alliance with Shin, co-habiting the boy's body in the interests of mutual survival. As other parasytes tend to view Shin as a threat to their existence, the stage is set for a series of spectacularly gruesome showdowns with Lefty's fellow aliens.

Iwaaki's simplistic artwork initially looks rather crude, but comes into its own when depicting the visceral action sequences and decidedly macabre human/parasyte transformations. In addition, the intelligent, morally ambiguous script manages to be both genuinely exciting and at times extremely thought provoking. If you like monsters, then this twelve-volume tale of sulky teenagers, serial murderers and brain eating, shape-shifting aliens is, quite simply, the business. 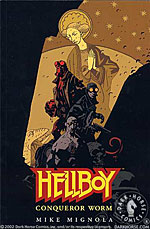 All five of Mike Mignola's HELLBOY collections are required reading for horror-aficionados, but CONQUERER WORM is particularly rich in the monster stakes - whether you like them good, bad, or just plain ugly. Half-demon, hell-spawned hero? Check. Tortured, grotesquely ugly homunculus sidekick? Check. Giant cyborg super-ape? Check. Floating disembodied Nazi head? Check. Huge, world-devouring worm from outer space? Check. And I could go on - I haven't even mentioned the aliens or the ghosts yet.

HELLBOY blends super-heroic action with traditional horror imagery and tropes to great effect, producing visuals that manage to be dynamic and exciting, as well as creepy and highly disturbing. Whilst the stories themselves are rarely original or particularly inspired, the sheer classiness of their execution always raises them well above the level of a simple superhero yarn. Plus, of course, you need to see Hellboy wrestle a giant ape through the floor of a medieval castle at least once in your life...

Because let's face it - monsters don't come any cooler than dinosaurs. Steve Bissette certainly thought so, and in 1994 ploughed his proceeds from the ultimately ill-fated 1963 series from Image into this hugely ambitious self-published project. TYRANT would, over the course of a projected sixty-plus bi-monthly issues, attempt to chronicle the life of a Cretaceous period Tyrannosaurus Rex from it's birth through to it's death, in as scientifically accurate a fashion as was possible.

Unfortunately TYRANT only ran to four, thus far never collected issues, with Bissette putting the project on indefinite hiatus after the direct market distribution system went tits up. He later retired from the comics industry, making a return to TYRANT highly unlikely. Nevertheless, these four issues - and in particular the final one, 'Dreams and Bones' - saw Bissette hit a career-high; his lovingly detailed Cretaceous landscapes and engaging cast of reptilian/saurian characters far surpassing almost all his previous artistic achievements - including the ones that involved the redefinition of the entire modern horror comics genre.

The title character never got much further than his egg in the end, and we certainly didn't get to see him bounding across a prehistoric plain savaging terrified Triceratops, but had things gotten that far, I'm certain it would have looked just as fantastic as it sounds.