Nostalgia's nothing new. As Marvel's celebration of its superhuman history reaches its tenth anniversary, Ninth Art looks back on the mini series that helped propel Alex Ross and Kurt Busiek to superstardom, and marvels.
09 April 2004 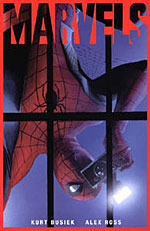 It's not unreasonable to state that we wouldn't have the popular music industry as it is today without them; both the Beatles and the Rolling Stones honed their craft by playing (and paying homage to) Southern-style blues. The best-selling single in the United Kingdom over the Christmas holiday season was Mad World, Gary Jules' cover of the Tears For Fears track, which enjoyed a new lease on life due to being featured in cult-favourite movie DONNIE DARKO. The likes of Tori Amos and Duran Duran have released albums consisting solely of previously recorded songs. There's money in them hills, it seems, even if they already appear to have been strip-mined.

Comics aren't immune from revisiting old ground, either. (Some pundits would argue that's all they do...) For instance: Marvel's Ultimate line; the 80's revival; DC's continual retreads of old series. If it gets the punters in, all well and good, but nostalgia's only going to take you so far; ultimately - pun intended - a new perspective is needed. A simple idea, granted, but not applied often, and rarely executed with any degree of originality.

This is part of why MARVELS works as well as it does: it takes the humanistic approach that Lee, Kirby, Ditko et al pioneered in those halcyon days, and blends it with a semi-journalistic standpoint - the view of the common man, if you will.

Phil Sheldon is just that: an ordinary guy, doing his best to make a living as a photojournalist in New York (circa the late 30s, early 40s). Aspiring to cover the political strife in Europe - which would soon conflagrate into the Second World War - Sheldon pounds the local beat, hoping for a promotion, and its in this role that he comes across an exhibition by scientist Phineas T Horton, of his 'artificial man'. 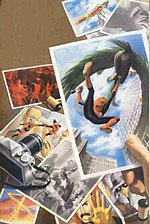 However, Horton's creation is defective: when exposed to oxygen, it bursts into flame - a literal human torch. His fellow newshounds dismiss Horton as a crackpot, but Sheldon is not so convinced; his suspicions are confirmed when Horton's brainchild runs wild in the streets a few weeks later, causing a panic. Thus, the age of the Marvels is born in fire - and for the next few decades, Sheldon opts to observe the storm via the objective lens of his camera.

MARVELS' first chapter deals with the heroes of the 40s; the aforementioned original Human Torch, the Sub-Mariner, and Captain America. The second flashes forward to the rise of the modern-day heroes - the Fantastic Four and the Avengers - while contrasting their presence with the 'threat' posed by mutants such as the X-Men.

The third act retells the first coming of Galactus to our planet - from a vintage FANTASTIC FOUR story - and offers insights into how the populace of New York would react to such an occurrence. The final part touches upon the death of Gwen Stacy - caught up in the Green Goblin's vendetta against Spider-Man - and shows how that leads Sheldon to rethink his life's work.

MARVELS rehashes several of the 'classic' Silver Age stories upon which the self-described 'House of Ideas' built its foundation. Alex Ross - who was, a decade ago, an up-and-coming artist - originally conceived of the project as an anthology that would recall Marvel's past through fresh artistic eyes.

It was Kurt Busiek, though, that reshaped the idea into what we know as MARVELS today, giving it a unified point of view and bringing the heroics - which we usually had a ringside view of - down to earth. That said, I would hesitate in calling MARVELS a 'realistic' depiction of superheroes - while it looks grand and vibrant when appropriate, it's a mite difficult to suspend disbelief when the narrative involves a man who can grow to giant size, and disbelief goes out the window when faced with an immense alien demigod. 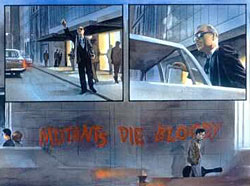 Obviously, Ross' art is the major selling point of MARVELS; to put in bluntly, it's what gets the punters in, as painted art seems more 'real' or traditional compared to the standard pencil-and-ink renderings common to most comic books. Does it look good? Yes, as Ross has a knack for capturing a moment and honing in on what makes it work. From a Rockwell-esque panorama of daily life, to a Kirby-fashion slugfest, it's technically very well executed.

However, where Ross falls down is the storytelling - for all the slick virtuosity Ross brings to the project, there is the unshakable feeling that when is all said and done, the reader is merely looking at a collection of pretty pictures strung together to form a narrative. There are points where Ross does the story more harm than good, where instead of drawing us deeper in to it, his grandiose splash pages serve to take readers out of the tale. That said, this is a decade-old work, and Ross has improved since then.

Kurt Busiek's love of comics' history shines through in most of the superhero projects he's tackled, from his own ASTRO CITY, to the recent JLA/AVENGERS event series. MARVELS - thankfully - avoids being a dry recitation of minutiae and trivia, as through the eyes of Phil Sheldon, Busiek takes the reader on a tour through the highlights of Marvel history with both zest and respect.

With the Marvels themselves serving as supporting characters, Sheldon, his family and his associates come to the fore, and they do come across as 'real' people, doing their best to live their lives in a world where aliens, super villains and 'evil' mutants are as commonplace as celebrities and sports stars. The script is MARVELS' true strength, and is easily the equal of Ross' art, even bettering it in places.

The best kind of cover version is one that adds something new to a familiar song, rather than slavishly recreating it or mutilating it beyond recognition. MARVELS manages to hit that note just right with its mix of nostalgia and insight. For long-time Marvel fans, it's very much a collection of familiar places and faces, but with the benefit of Busiek and Ross' hindsight, you just might find yourself seeing them with new eyes.

Brent Keane is a regular contributor to Ninth Art and PopImage and has also written for Opi8, Sequential Tart and Nerdbait.