Giving a dormant DC action-adventure trademark to a relatively unknown creative team may have been a gamble for Vertigo, but when the chips were down, these guys were definitely ready.
30 April 2004 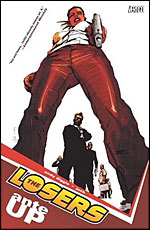 Pony up to the table; it's time to deal out some cards.

I wouldn't call myself a high roller, but I did used to play poker on a regular basis. Like the song says, you gotta know when to hold 'em, when to fold 'em...sometimes I came out ahead, most times I broke even. More importantly, I knew when to walk away from the table. Obviously, poker is a game of risk; bluff successfully, and you can scoop the pot. Lose, and it feels like your world's come to an end.

For the former Special Forces unit that refers to themselves as 'the Losers', their former lives crashed down around them in the wake of uncovering an illegal CIA operation. With little else to live for other than revenge, they set about bringing their former superiors to justice in suitably explosive fashion. For example, when they threaten to detonate a fuel-air bomb at a Houston oil terminal - which does far more immediate damage than a nuclear device - you know that they ain't bluffing...and that they're willing to play for high stakes. 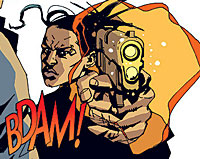 All right, I'll quit it with the gambling metaphors now. I mean, I don't want to come across as over-enthusiastic, but THE LOSERS was easily one of the best new series to come out last year. It's an exciting book, and one that gets you excited; a rare thing indeed. Even better, it's not another superhero revival or revamp, or 80s nostalgia trip - Andy Diggle and Jock have made this book a success through straight-ahead no-nonsense action-packed storytelling; think John McTiernan directing OCEAN'S ELEVEN.

THE LOSERS may be a familiar name to long-time readers, being a popular group of World War II characters featured in the DC war series OUR FIGHTING FORCES during the 1970s. However, this group has noting in common with the former incarnation bar the name and military connections. As Diggle himself admitted in an interview, "I just took the title and the concept of a unit of soldiers who are presumed dead, switched it to the present day, and ran with it". And while the Second World War was dirty enough, the wars fought in the name of 'Homeland Security' in the wake of the terrorist attacks of September 11 2001 appear to have made the former seem like an old-fashioned pistol duel at dawn.

This, then, is the essential thrust behind THE LOSERS: it's an action movie on paper, with additional smarts and a social conscience. It's about Truth, Justice and The American Way - or, more to the point, how that way has been lost in the midst of political wrangling and backroom double-dealing. This is not to say that Diggle and Jock preach to the audience - far from it -they know what their audience wants: cool dudes blowin' stuff up with aplomb.

The team consists of Clay, the leader; Cougar, ice-cool sniper; Jensen, the hacker with the motor mouth; Pooch, the laid-back driver and Roque, the demolition man, and they're joined in this first arc by Aisha, an Afghani who carries some deep secrets. The characters are sketched out lightly, but enough to give the reader something to identify with. That said, if you're looking for heartfelt dialogue, you should probably read STRANGERS IN PARADISE, instead. This is an action book, after all.

That's not to say that Diggle's script is all glib one-liners, or that it's heavy with exposition. The dialogue is sharp and carries a street-flavoured tang, while the plot is easy to follow without being patronisingly simplistic. It also helps that the story is engaging and fun from the get-go. We get a complete tale here in ANTE UP, as well as an interesting back-story to intrigue the reader further; I certainly would like to see more.

Jock is one of the great artistic finds to emerge from the United Kingdom in the last few years, and ANTE UP displays the range of his talents admirably. With the superb and sedate colour work of Lee Loughridge, Jock demonstrates that he can depict the quiet moments with as much ability as he can handle the action. THE LOSERS has been Jock's breakout project, after honing his skills at 2000AD, and more power to him.

The relative success of THE LOSERS thus far suggests that comics can equal (or better) any movie genre that Hollywood throws up, and that it can handle the storytelling demands inherent to each type. It may be popcorn comics, but ANTE UP is popcorn of the very best kind. Diggle and Jock are onto a winner here and - to return to the gambling metaphors - it's a horse worth backing. This leaves only one question for you to answer, dear reader:

Are you in, or are you out?

Brent Keane is a regular contributor to Ninth Art and PopImage and has also written for Opi8, Sequential Tart and Nerdbait.